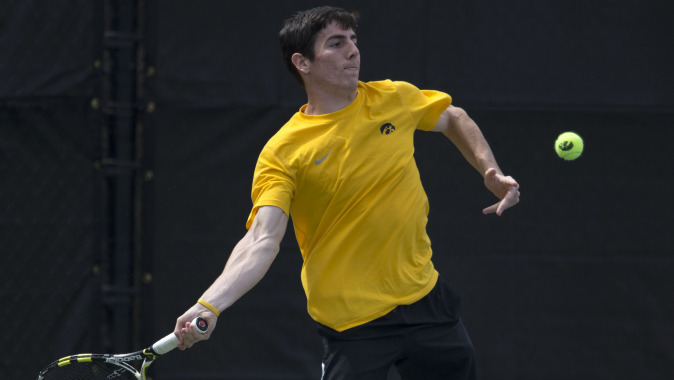 THIS WEEK:
The University of Iowa men’s tennis team will travel to Tulsa, Oklahoma, for competition Saturday-Monday at the ITA All-American Tournament.

LAST WEEKEND RECAP:
Freshman Jake Jacoby and senior Andres Estenssoro both posted 2-1 records in singles action at the Purdue Fall Invitational. Also, the doubles team of Nils Hallestrand and Jake Jacoby went 2-1 and were awarded the Flight A consolation title due to a forfeit against a scheduled match against a duo from UW-Green Bay. The doubles team consisting of junior Dominic Patrick and freshman Josh Silverstein posted a 3-1 record at the Princeton Farnsworth Invitational making a run into the semifinals of the main draw in the Black bracket.

HAWKEYE RETURNEES:
The Hawkeyes lost six seniors to graduation last spring, but return four student-athletes in 2014-15. Andres Estenssoro and Matt Hagan enter their senior seasons, while Dominic Patrick is a junior and Nils Hallestrand enters his sophomore campaign. Estenssoro and Dominic Patrick posted 7-6 and 23-16 singles records, respectively, in 2013-14; neither player saw doubles action. Hallestrand was 9-7 in singles and 3-1 in doubles action a year ago. Hagan was 16-15 in singles and 15-10 in doubles.

HAWKEYE NEWCOMERS:
Iowa welcomes three freshmen to the squad: Jake Jacoby (Little Rock, Arkansas), Josh Silverstein (Great Neck, New York), and Lefteris Theodorou (Athens, Greece). Jacoby was a four-time Arkansas state champion. Silverstein was a five-time USTA National Open doubles champion and had success on the junior tournament circuit this past summer. Theodorou, a Greek National champion, was the No. 1 Greek player ranked in U14, U16, and U18.

WILSON ON ITA ALL-AMERICAN TOURNAMENT:
“This tournament is the first big national tournament of the year for college tennis, all the best players in the country will be there. We’re looking for our guys to improve on what they did last weekend and to play every point while maintaining a constant positive attitude.”