Hawkeyes Head to Michigan for a Pair of Road Contests 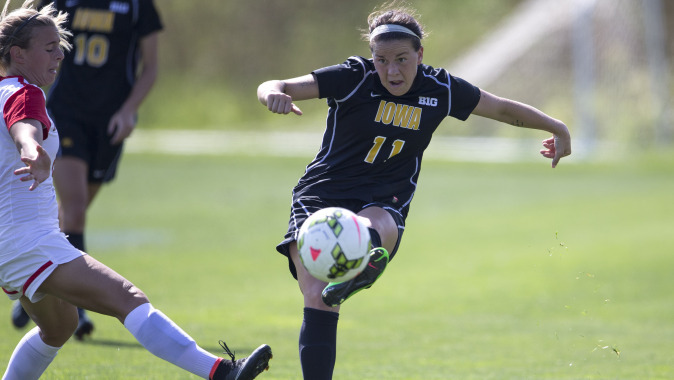 THE MATCH-UP
The University of Iowa soccer team kicks off a stretch of three-straight road contests this week with matchups at Michigan State and Michigan. The Hawkeyes take on the Spartans in East Lansing on Thursday at 3:30 p.m. (CT) before facing the Wolverines in Ann Arbor on Sunday at 1 p.m.

ON THE WEB
Iowa soccer fans can follow Thursday and Sunday’s contests via live stats (GameTracker) on hawkeyesports.com. Click on the “GT” link found on both the front page and the soccer schedule page to access the live stats feed. Fans can also follow @HawkeyeSoccer for live in-game updates.

QUICK HITTERS
? Iowa is second in the Big Ten with seven shutouts in 11 games this season, four by Hannah Clark and three by Kiley Beck. Clark had her streak of four-consecutive shutouts and 379:26 scoreless minutes snapped in a 1-0 loss to Maryland on Sept. 25. ? Iowa is outscoring opponents by a margin of 20-6 and is outshooting opposing teams, 156-122, through 11 games this season.
? Senior Cloe Lacasse is tied for second in the Big Ten with seven goals and is third with 18 points and 46 shots.
? Iowa has used nine different starting lineups in 11 games this season. Senior Marissa Hurt made her first career start Sept. 14 against Northwestern, and Brooke Backes made her first start of the season Sept. 20 at Minnesota.
? Five-of-nine freshmen have seen the playing field for the Hawkeyes this season, including Katharine Woodruff who has appeared in all 11 games.

SCOUTING MICHIGAN STATE
Michigan State owns an overall record of 6-4-1 and is looking to notch its first conference win of the season after going 0-4-1 in the early portion of Big Ten play. Last time out, Michigan State gave up a goal in the final minute to lose a 2-1 heartbreaker to Michigan. The Spartans have posted four shutouts this season while tallying a league-best 63 saves, with senior Courtney Clem making 59 stops. Freshman Jamie Cheslik has a team-high six goals.

MICHIGAN STATE VS. IOWA — THE SERIES
? The Spartans lead the all-time series between the two schools, posting a record of 8-5-5.
? Iowa won last year’s meeting in Iowa City, posting a 1-0 victory in double overtime.
? The last time Iowa won at Michigan State was in 1999 when the Hawkeyes defeated the Spartans, 1-0.
? Four of the last six games have gone into overtime with three going into double-overtime.
? Michigan State has not scored a goal against the Hawkeyes since a 1-1 tie in double overtime on Oct. 31, 2010.

SCOUTING MICHIGAN
Seventh-year head coach Greg Ryan and the Wolverines are 8-3-0 overall and 4-1-0 in conference play. After suffering its first conference loss to Rutgers on Sept. 21, Michigan bounced back to defeat in-state rival Michigan State on Sept. 27. Sophomore Nicky Waldeck scored the game-winning goal with 24 seconds remaining to lift the Wolverines to a 2-1 victory. Michigan is 7-0 at home this season — which includes a 2-1 win over No. 9 Wisconsin on Sept. 14. The team has scored 18 goals off of 23 assists , which is good for second in the conference. Michigan features three players with three or more goals, including Waldek with team-high five strikes.

MICHIGAN VS. IOWA — THE SERIES
? The Wolverines lead the all-time series against the Hawkeyes, posting a 14-3-2 record.
? Iowa’s 1-0 victory over Michigan in last year’s Big Ten Tournament marked the first time Iowa defeated the Wolverines since 2009.

LAST GAME
In only the second meeting all-time between the two schools, No. 17 Rutgers defeated the 13th-ranked Hawkeyes in Iowa City, 1-0.

After playing to a scoreless tie in the first half, the Scarlet Knights came out with a vengeance early in the second half, peppering five shots at Iowa goalkeeper Hannah Clark in the first four minutes. In the 50th minute, Tiernan received a pass from Amy Pietrangelo, gathered herself before firing into the far corner to give Rutgers a 1-0 lead. The goal would eventually prove to be the game winner as the Hawkeyes could not connect with the back of the net on a day which saw them fire off 12 shots.

Cloe Lacasse…
? has scored in four contests this season, including three two-goal games, pushing her career total to 10 as a Hawkeye.
? tallied her 100th career point in Iowa’s 2-0 victory over Illinois on Sept. 11, assisting on Nicole Urban’s strike. Lacasse is the second player in Iowa history to reach the 100-point mark.
? currently ranks second in Iowa history with 38 goals and 100 points. Sarah Lynch is the record holder with 112 points and 46 goals.
? has seven goals and four assists for 18 points in 2014. As a junior, she had six goals and seven assists in 23 games.
? ranks 28th in the nation in points (18) and 40th in points per game (1.64).

IOWA SIXTH IN REGIONAL RANKINGS
After spending the previous two weeks at the the No. 5 spot in the NSCAA Great Lakes Region rankings, The Hawkeyes dropped to No. 6 after falling to Maryland and No. 17/25 Rutgers in back-to-back conference matchups. Big Ten schools occupy the top-seven spots of the 10-team ranking.

THE HAWKEYES ARE…
? 5-1 when leading at the half
? 8-1 when scoring first this season

STELLAR DEFENSE
If you don’t shoot, you can’t score. Iowa’s defense has allowed four or fewer shots on goal in 7-of-11 games this season, and the Hawkeyes have allowed fewer than 10 shots in four contests.

HAWKEYES DISTRIBUTING
Iowa has tallied 16 assists through 11 games this year. Five different Hawkeyes have at least two assists this season with senior Cloe Lacasse and sophomore Bri Toelle leading the team with four.

BROWN: A CONSTANT
Senior Caitlin Brown is the only Iowa player to log every minute of game action this season. The defender has played every minute for the past 45 games dating back to the 2012 season — a streak of 4,259 minutes.

SENIOR EXPERIENCE
Senior Melanie Pickert has started all 75 games of her Iowa career, while fellow seniors Caitlin Brown and Cloe Lacasse have started 74-of-75 games as Hawkeyes.

IOWA MAKING HISTORY
The week of Sept. 21 was a big one for the Hawkeyes. After starting 3-0 in Big Ten play, marking Iowa’s best start in league play in program history, The Hawkeyes were ranked No. 13 in the Sept. 23 Soccer America rankings, the highest ranking in program history. Iowa also broke into the Top Drawer Soccer Top-25, coming in at No. 25 and received votes in the NSCAA poll.

B1G IN THE POLLS
Penn State, Wisconsin, Illinois, and Rutgers are ranked in the latest NSCAA Top 25 poll of the 2014 season. The Nittany Lions are ranked No. 7, the Badgers follow at No. 13, llinois checks in at No. 19, and the Scarlet Knights come in at No. 25. Michigan is also receiving votes.

NEXT UP
The Hawkeyes are back in action on Oct. 8, facing No. 13 Wisconsin at the McClimon Soccer Complex in Madison, Wisconsin. The Wednesday night matchup is slated for a 7 p.m. start time.