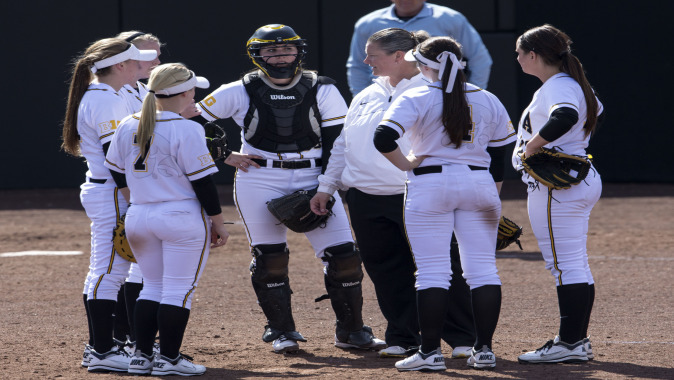 “We got things rolling and couldn’t finish out,” UI head coach Marla Looper said. “That got frustrating, but on the flipside these are scoring opportunities we’ve been able to get in. Now we just need to learn to produce in them next time.

“I think we all left with a bad taste in our mouths from the weekend and the challenge moving forward is fixing the little things. We need to take care of the ball and capitalize on our opportunities. It’s all very much in our control and in our grasp.”

“Ashley Yoways did a nice job,” Looper said. “She kept them off balance and let our defense play. She had some nice plays defensively as well.”

The Hawkeyes used home runs by Whitney Repole and Sammi Gyerman and doubles from Repole and Megan Blank to key their run-rule victory. Repole drove in four runs to lead the squad, while Gyerman added two RBIs and Allie Wood and Erin Erickson posted one RBI apiece.

Iowa concludes its fall season at home with a double header against Kirkwood Community College on Friday, Oct. 10. First pitch is scheduled for 5 p.m. (CT).