No. 15 Hawkeyes Set to Close Out Home Schedule 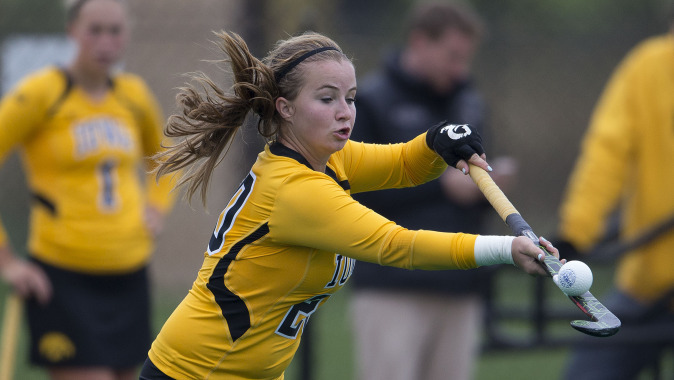 Promotions
Saturday’s contest against Penn State is Senior Day and Fan Appreciation Day. Fans will have the opportunity to enter a drawing for a signed field hockey stick. UI seniors Sara Watro, Brynn Gitt, and Dani Hemeon will be honored prior to the start of the match.

Scouting Penn State
Charlene Morett-Curtiss is in her 28th season at the helm of the Penn State program and has the Nittany Lions off to a 13-3 start with a 4-2 mark in Big Ten play. Penn State senior Taylor herold paces the team with 39 points on 16 goals and seven assists. Defensively, redshirt senior Kylie Licata (13-3) has started all 16 games as goalkeeper. Licata has collected 84 saves and surrendered 19 goals.

We Meet Again
Saturday’s contest marks the 47th meeting between Iowa and Penn State. The two last met in the second round of the Big Ten Tournament on Nov. 8, 2013, when Iowa scored a 4-3 victory over the Nittany Lions.

All-Time Series
The Hawkeyes hold the edge in the all-time series against Penn State. Iowa posts a 24-21-1 all-time mark against the Nittany Lions with a 11-4-1 mark on Grant Field.

In the Rankings
Iowa ranks 15th in the 2014 Penn Monto/National Field Hockey Coaches Association (NFHCA) Division I Poll. The Hawkeyes garnered 279 points in the rankings. Iowa has been ranked each week (41 weeks) in the poll dating back to Sept. 6, 2011. Iowa is one of five Big Ten Conference schools in the rankings along with Maryland (second), Penn State (fourth), Northwestern (ninth), Michigan (12th), and Indiana (19th).

Iowa Sits No. 18 in RPI Rankings
The Rating Percentage Index, commonly known as the RPI, is a quantity used to rank teams based upon a team’s wins and losses and its strength of schedule. Released Oct. 21st, the Hawkeyes landed a No. 18 national ranking.

Looking Ahead
Iowa hits the road for the regular season finale on Nov. 1, squaring off with Maryland. The contest will mark the first-ever Big Ten Conference meeting between the two schools.

Chasing History
Junior Natalie Cafone enters the weekend with 47 career goals — one away from emerging into the program’s top-10 list. Cafone sits behind her former high school coach Diane DeMiro. DeMiro — a 1996 graduate — recorded 48 goals throughout her career as a Hawkeye.

Cafone Steps Up
Junior Natalie Cafone was named the University of Iowa’s 2014 Female Athlete of the Year. The Fairfield, N.J., native was the NCAA statistical champion for points per game in 2013, leading the nation in points per game (2.48) the first Hawkeye to lead nation in points per game since Kristy Gleason in 1992 (3.95). Cafone was named to the NFHCA Division I All-America second team, NFHCA West Region All-America first team, All-Big Ten first team and the All-Big Ten tournament team. Cafone has scored 39 goals over her last 36 games.