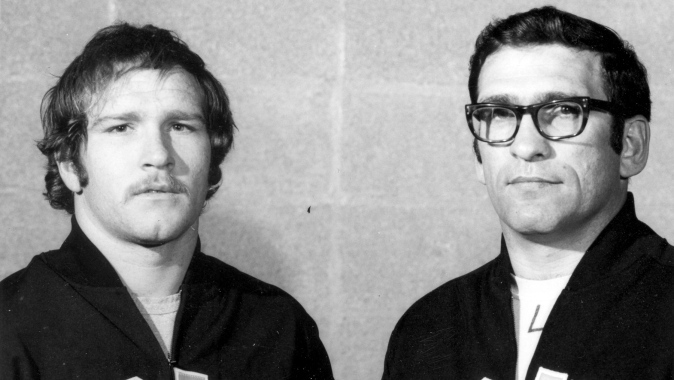 The mat? The promotions? The expectations? It all needed to improve.

The mat needed to be larger, so he made it grow. The crowd needed incentive, so he fed it to them. The expectations needed to rise, so he started building… fast.

“He used to talk about how he was going to build the program to that level,” said Steve Kurdelmeier, Gary’s son and a former Hawkeye wrestler. “He felt like Iowa should be a national wrestling power, and we really weren’t at the time. He felt like it was our place to be.”

Upon assuming control of the program, Kurdelmeier lured former Iowa State standout Dan Gable away from Ames and into the Iowa wrestling room, almost immediately handing the day-to-day training over to his eventual heir apparent.

With Gable managing the wrestling room, Kurdelmeier was able to promote the sport. The combination eventually made Iowa wrestling a must-see event.

The Hawkeyes started winning, and within the first year 100 fans turned into thousands.

“He was a promoter. That was his big thing,” said Steve. “He was always promoting and trying to come up with a new way to interest people in the sport. He came up with some wild things every once in a while.”

When defending champion Oklahoma visited Iowa City in 1975, the Sooners had a reputation of wrestling on the edge, so Kurdelmeier pieced together four mats to create a 74-foot wrestling surface that would later be banned by the wrestling rules committee.

“I don’t think he asked anybody,” said Steve. “He just decided that’s what he wanted to do so he did it. It certainly wasn’t announced going in, and I think (Oklahoma) just about refused to wrestle.”

Oklahoma did wrestle, and Iowa dominated the match, 34-5, triggering another Kurdelmeier promotion — free McDonald’s hamburgers for everyone in attendance.

“Those are the things he did, you should hear some of the things he didn’t do,” said Steve. “He thought one time it would be interesting to have 10 guys weigh-in on one scale at the same time, and rather than having weight classes you had one total weight. Then you could line your guys up any way you so felt fit.”

That idea never saw the light of day, but that may have been by design.

“He was already planning the next thing,” said Steve. “When he started building he saw the end product before it was ever going to happen. He just felt like it was the inevitable end of where Iowa would end up.

“Prior to him being there they had never been a power, and the fact that between Gable and (Jim) Zalesky and (Tom) Brands, he would be proud that the school has maintained itself as a national power for all these years.”

Gary Kurdelmeier passed away in 1998 at the age of 62. He will be recognized Saturday as Iowa’s honorary captain when the top-ranked Hawkeyes host Iowa State at 7 p.m. (CT). Kurdelmeier will be represented by his wife, Barbara; son, Steve; daughter, Kathy; and their immediate families.