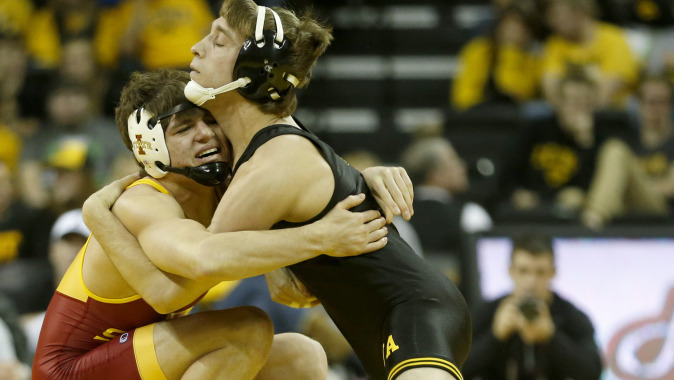 SORENSEN WINS HOME OPENER
Redshirt freshman Brandon Sorensen won his Carver-Hawkeye Arena debut on Nov. 29, defeating Iowa State’s Gabe Moreno, 7-6. Moreno was a NCAA qualifier and Big 12 runner-up in 2014. The win pushed Sorensen into the ranking for the first time in his career. He is ranked No. 11 by Intermat and No. 16 by WIN Magazine. Sorensen is 10-1 overall with three pins, two major decisions and one technical fall. His only loss this season was a 3-2 decision to Brody Grothus in the Luther Open semifinals.

7-FOR-7
Senior Bobby Telford has seven wins by fall against seven opponents this year. He also has a win via medical forfeit. Telford has 26 career pins, nearing his single-season high of nine set as a redshirt freshman in 2011-12.

A LITTLE EXTRA FROM BROOKS
Sophomore Sammy Brooks won for the seventh time this season, all bonus-point wins, when he recorded his first major decision of the season over No. 18 Lelund Weatherspoon of Iowa State. Brooks entered the Iowa State dual with three pins and three technical falls. Brooks is 8-0 overall including a win via medical forfeit. He has won 10 in a row dating back to last season.

KELLY RETURNS TO 157
Senior Michael Kelly is 9-0 with four falls this season at 157 pounds. Kelly has a 31-3 career mark at 157, including an 18-1 record competing unattached in 2010-11. He was 5-1 as a redshirt freshman, and wrestled his entire sophomore campaign at 149. He wrestled at 157 once last year, falling to Indiana’s sixth-ranked Taylor Walsh. The veteran has 36 career dual starts under his belt, the fourth most on the team.

UNDEFEATED ALL-AMERICANS
Iowa’s four returning All-Americans — Cory Clark (125), Mike Evans (174), Nathan Burak (197), and Bobby Telford (285) — are a combined 28-0 this season with 17 pins. Telford and Clark are both 8-0. Telford has seven pins and one win via medial forfeit. Clark has pinned six of his eight opponents. Evans has six wins by bonus points and a decision over a top 10 opponent. Burak was 4-0 with one pin, one major decision, and one technical fall at the Luther Open, but he has not seen action since due to injury. The Hawkeyes have crowned at least one All-American every year since 1972, a span of 43 seasons. Iowa has totaled 261 All-America honors during that stretch. The Hawkeyes crowned six All-Americans in 2014, including four-time All-American Derek St. John (157) and first-timers Clark (125) and Burak (197). Tony Ramos earned his third career All-America honor, winning the 133-pound bracket, and Evans (174) and Telford (285) were both named All-Americans for the second time in their careers.

THE ATTENDANCE GAME
In 2013-14, the University of Iowa wrestling program led the nation in attendance for the eighth consecutive season according to the annual Division I attendance report released March 4 by Roby Publishing. Iowa averaged 8,835 fans in seven duals, setting an NCAA single season attendance record of 61,843. The Hawkeyes averaged at least 8,000 fans for the sixth consecutive season, and own the three highest single season averages in NCAA history (9,014 in 2012; 8,764 in 2013). In 2013-14, Iowa became the first school in NCAA history to host three duals with more than 10,000 fans — Penn State (13,747), Minnesota (10,588), and Oklahoma State (10,141). When considering the Iowa City Duals — which Iowa hosted Nov. 22 against Baker, Cornell College, and Iowa Central — a school record 67,556 fans attended wrestling meets inside Carver-Hawkeye Arena.

TICKET INFORMATION
Season and single dual tickets are now available for purchase on hawkeyesports.com. Season tickets for eight home dates are available for $95. UI students and kids five-years old and younger are admitted free to all wrestling events. Single dual tickets are $12 for duals against Michigan State (Dec. 6), Illinois (Jan. 16), Northwestern (Jan. 23), and Michigan (Feb. 13). Adult tickets are $15 for Virginia (Feb. 15) — Iowa’s opening round opponent of the Cliff Keen National Duals. Youth tickets (18 and younger) are $8 for single duals. Tickets to the second round of the Cliff Keen National Duals (Feb. 21-22) — featuring eight teams and three rounds of competition — are $10 for Saturday’s quarterfinals and semifinals, and $20 for Sunday’s final round.

BTN TO TELEVISE NATIONAL DUALS
The National Wrestling Coaches Association reached an agreement with the Big Ten Network to televise the Cliff Keen National Duals Tournament in Iowa City, Iowa, on Feb. 21-22. Originally scheduled as a two-day event on Feb. 15 (regionals) and Feb. 22 (championship quarterfinals, semifinals, and finals), the tournament has expanded to three days to include live television coverage of semifinal and final round competition at Carver-Hawkeye Arena on Feb. 21-22. Regional rounds will be contested at host schools on Feb. 15. BTN will televise the semifinals Saturday, Feb. 21, at 3 p.m. (CT), and the finals Sunday, Feb. 22, at 11:30 a.m. Quarterfinals begin Saturday, Feb. 21, at 12 p.m. at Carver-Hawkeye Arena. Eight teams qualify for the quarterfinals following regional competition on Feb. 15. Iowa hosts Virginia in one of the regional rounds on Feb. 15 at 1 p.m. Tickets are $10 for Saturday, Feb. 21 (quarterfinals and semifinals), and $20 for Sunday, Feb. 22 (finals and consolation finals). Prices are for all ages, and everyone needs a ticket for entry.

HAWKEYES ON TV
University of Iowa wrestling team will make seven appearances on BTN this season, including a pair of dates hosting the Cliff Keen National Duals. Iowa’s regular season duals at Rutgers, Minnesota, and Penn State will air live on BTN. The Hawkeyes wrestle at Rutgers on Jan. 2 at 7 p.m. (CT), at Minnesota on Jan. 30 at 6 p.m., and at Penn State on Feb. 8 at 12 p.m. BTN will televise the semifinal and final rounds of the Cliff Keen National Duals, hosted by the University of Iowa on Feb. 21-22. The semifinals will air Saturday on BTN at 3 p.m. The finals will be televised Sunday at 11:30 a.m. BTN is televising the final round of the Midlands Championship on Dec. 30 at 7 p.m., and final round of the Big Ten Championships on March 8, 2015, at 2 p.m. The 2015 conference tournament is hosted by Ohio State.