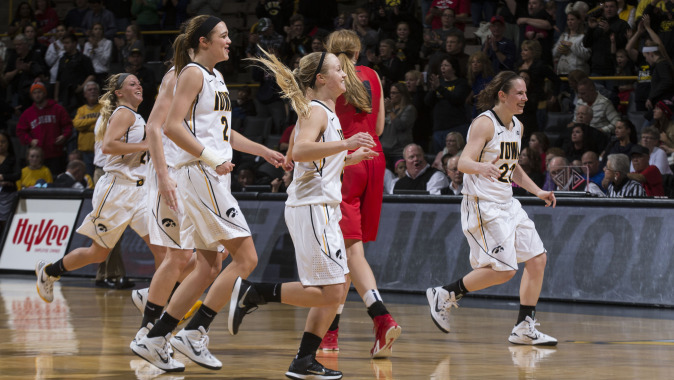 THE SETTING:
The 19th-ranked University of Iowa women’s basketball team (6-2) returns home to host Colorado (6-1) on Sunday at 2 p.m. (CT) on Mediacom Court at Carver-Hawkeye Arena.

WATCH THE ACTION:
Sunday’s contest can be seen on Mediacom Connections (MC22) and also via BTN Plus. Rob Brooks and Shelley Till will call the action.

AUDIO COVERAGE:
Brent Balbinot and Kristi Faulkner will call the game for the Hawkeye Radio Network. Hawkeye fans can listen to the contest on AM-800 KXIC in Iowa City, AM-600 WMT in Cedar Rapids, AM-1040 WHO in Des Moines (and other Hawkeye Radio Network stations), or on the Hawkeye All-Access page of hawkeyesports.com. Balbinot is in his 11th season as Iowa’s play-by-play voice.

SCOUTING COLORADO:
? Colorado is 6-1 on the season. The Buffs are 5-1 at home, and 1-0 on the road (at Denver, 77-49).
? Colorado head coach Linda Lappe is a native of Morning Sun, Iowa. Morning Sun is 50 miles south of Iowa City.
? Lappe is in her fifth year as head coach at Colorado. She graduated from Winfield-Mount Union High School and played at Colorado.

ALL-TIME SERIES / LAST MEETING:
? Colorado, then ranked No. 16, downed Iowa last season in Boulder, Colorado, 90-87.
? The Buffaloes lead the all-time series, 3-1.
? Iowa won the last and only meeting in Iowa City during the 2000-01 season, 92-66, during Lisa Bluder‘s first year as head coach at Iowa. She earned her fifth win as Hawkeye head coach with the win over the Buffs.

PESCHEL NAMED TO ALLSTATE GOOD WORKS TEAM:
Junior Kali Peschel has been nominated for the 2015 Allstate WBCA Good Works Team®. This prestigious community service award recognizes a distinguished group of student-athletes who have demonstrated a commitment to enriching the lives of others and contributing to the greater good in their communities.

Peschel, a junior from Sauk Centre, Minnesota, has played in every game for the Hawkeyes the last two seasons, making 22 starts. She was a 2014 Academic All-Big Ten honoree.

HAWKEYES 22/19 IN RANKINGS:
Iowa is No. 22 in this week’s Associated Press Top-25 poll and No. 19 in the USA Today Preseason Coaches poll.

She has also been named a 2014-15 “Wade Watch” list candidate for the prestigious award (The Wade Trophy), the Women’s Basketball Coaches Association (WBCA) announced.

1,000-POINT CLUB:
Four members of this year’s team have reached, or have the potential to reach 1,000 career points this year.

Senior Bethany Doolittle has 959 career points. She needs 41 points to become the 33rd career member of the 1,000-point club.

Sophomore Ally Disterhoft has 595 career points. She tallied 474 in 36 games as a freshman last year (13.2 per game), and is averaging 15.1 points per game this season.