Hawkeye Softball Gives Back Over the Holidays 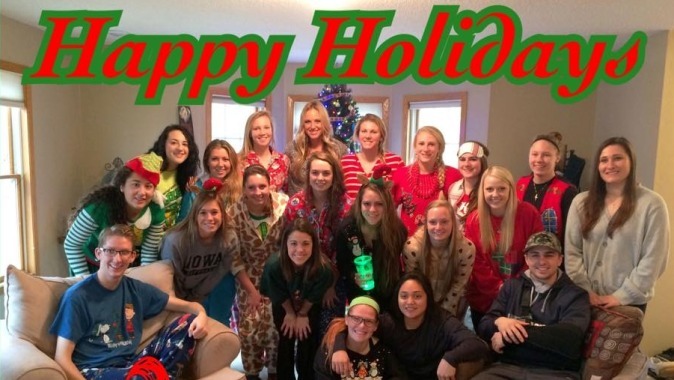 IOWA CITY, Iowa — For the second straight year, the University of Iowa softball team made the decision to give back over the holiday season. The Hawkeyes adopted a local family of four — a mother, son, daughter, and baby boy — through Children and Families of Iowa.

“It’s a good way to understand the holiday season,” junior outfielder Haley Hansel said. “Between school and softball this time of year almost slips by, so this is a good way to put things in perspective for our team and for me personally.”

Each Hawkeye committed to donate $20 to raise a total of $700. The team then split into groups to shop for gifts to give each family member.

Last Saturday, the student-athletes and staff gathered at head coach Marla Looper‘s home to wrap the gifts and celebrate the season. The gifts were dropped off early last week, which allowed for the family to open on Christmas.

“It’s a good way for all of us to come together on one project because we do a lot of community service stuff on our own throughout the year,” said Hansel. “We got the opportunity to come together as Iowa softball and make a difference in one family’s Christmas. It’s a big deal, and we were excited about it.”

While the Hawkeyes do not get to meet the family that will benefit from their gift, they are grateful for the experience.