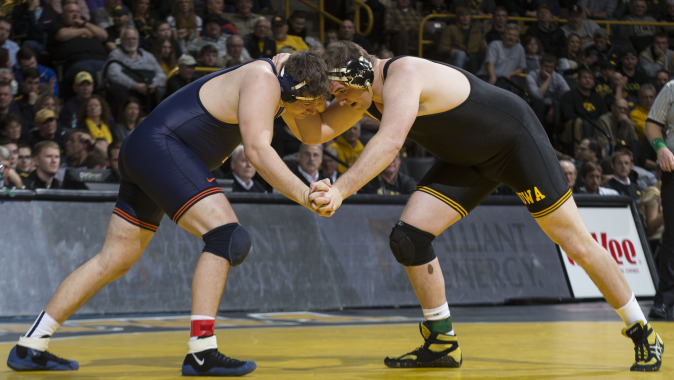 ON THE MAT
The top-ranked University of Iowa wrestling team hosts No. 24 Northwestern on Friday at 7 p.m. (CT) on Mediacom Mat inside Carver-Hawkeye Arena. The dual will be streamed live on BTN Plus via BTN2Go.

40 YEAR ANNIVERSARY
Iowa will celebrate the 40th anniversary of its first national championship on Friday. Gary Kurdelmeier led Iowa to its first NCAA Championship in 1975, and in the 40 years since, the Hawkeyes have accumulated 23 team titles, more than any other school — Oklahoma State (7), Penn State (4), Minnesota (3), Iowa State (2), and Arizona State (1).

BEST-OF-SEVEN
Friday’s heavyweight match will be the seventh meeting between Iowa’s Bobby Telford and Northwestern’s Mike McMullan. The head-to-head series is tied, 3-3. They split a pair of meetings as redshirt freshman in 2011-12. McMullan won two-of-three last season, and Telford won their only meeting this season, a 4-2 decision in the Midlands finals. Friday marks the third meeting when one wrestler was ranked No. 1. McMullan, ranked third when the Hawkeyes traveled to Northwestern last season, defeated top-ranked Telford, 3-1, in sudden victory. In the 2014 Midlands finals, the third-ranked Telford returned the favor, knocking off top-ranked McMullan, 4-2. Telford enters Friday’s dual ranked No. 1. McMullan is ranked No. 4.

LOTS OF W’S AT 149
Northwestern’s defending NCAA Champion Jason Tsirtsis has won 40 straight dating back to last season. Tsirtsis is the top-ranked 149-pounder in the country. His brother Alex started 74 duals for the Hawkeyes from 2005-09 and was an All-American in 2006 at 141 pounds. Brandon Sorensen, ranked No. 3 in the nation, has won 36 of his last 38 matches dating back to last season. He won his final 13 bouts wrestling unattached last year, and is 23-2 as a redshirt freshman this season. He has won six straight, including three against ranked opponents.

HAWKEYE TRAINED
Northwestern assistant coach Jay Borschel won the 174-pound NCAA championship at the University of Iowa in 2010. The Marion, Iowa, native was a two-time All-American and a member of three NCAA title teams from 2008-10. He was named Iowa Male Athlete of the Year in 2010.

HAWKEYES IN THE RANKINGS
Iowa has nine wrestlers ranked in the top 10 of the latest Intermat rankings (Jan. 20), more than any other school. Six of Iowa’s wrestlers are ranked in the top 5, including Thomas Gilman (5), Cory Clark (5), Brandon Sorensen (3), Mike Evans (2), Nathan Burak (4) and Bobby Telford (1). Two more Hawkeyes are projected in the top eight, including Josh Dziewa (6) and Sammy Brooks (8). Nick Moore is ranked No. 9 at 165, while Michael Kelly is ranked No. 17 at 157.

LAST OF THE UNBEATENS
Mike Evans (17-0), Nathan Burak (12-0), and Bobby Telford (18-0) enter the dual with undefeated records. All three streaks are career bests. In the history of Iowa wrestling, 15 wrestlers have finished the season with a perfect record (minimum 20 matches). Four of those wrestlers were able to perform the feat twice. They include Mark Ironside, Lincoln McIlravy, T.J. Williams and Jim Zalesky. Iowa coaches Tom Brands and Terry Brands are among the 15 wrestlers. Tom went 45-0 in 1990-91 and Terry went 35-0 in 1991-92.

UNDEFEATED ALL-AMERICANS
Three of Iowa’s four returning All-Americans — Mike Evans (174), Nathan Burak (197), and Bobby Telford (285) — are a combined 47-0 this season with 22 pins. Telford is 18-0 with nine pins, one major decision, and one win via medical forfeit. Evans is 17-0 with 10 wins by bonus points. Burak is 12-0 with two pins, one major decision, and one technical fall. He has claimed two tournament titles wrestling unattached at the Luther Open and Midlands Championships. He wrestled attached for the first time Jan. 4 at Ohio State and earned a 2-1 win over No. 7 Kyle Snyder. Clark, Iowa’s other returning All-American, was 14-0 before losing for the first time to Ohio State’s ninth-ranked Johnny DiJulius, 7-5. Clark is 15-2 overall with seven falls, one technical fall, and one major decision. All four returning All-Americans won Midlands individual titles on Dec. 30. The Hawkeyes have crowned at least one All-American every year since 1972, a span of 43 seasons. Iowa has totaled 261 All-America honors during that stretch. The Hawkeyes crowned six All-Americans in 2014, including four-time All-American Derek St. John (157) and first-timers Clark (125) and Burak (197). Tony Ramos earned his third career All-America honor, winning the 133-pound bracket, and Evans (174) and Telford (285) were both named All-Americans for the second time in their careers.

EVANS LEADS ACTIVE HAWKEYES
Senior Mike Evans recorded a 16-1 technical fall at Oklahoma State to improve to 17-0. The 17 consecutive wins is a career-long, and six better than his previous streak of 11 set in 2013-14. Evans has 94 career wins, more than any other active Hawkeye, and his 61 career dual starts are most on the team. He is 51-10 all-time in duals.

B1G WEEKLY HONORS
Redshirt freshman Brandon Sorensen and senior Bobby Telford have been recognized by the Big Ten office this season. Sorensen was named Big Ten Co-Wrestler of the Week by the conference office Jan. 13, two weeks after Telford received the honor on Dec. 31. Sorensen, a native of Cedar Falls, Iowa, was recognized after defeating second-ranked Josh Kindig of Oklahoma State, 6-1. Telford won the Midlands 285-pound title on Dec. 30, knocking off No. 5 Connor Medbery (Wisconsin) in the semifinals and defeating then-top ranked Mike McMullan (Northwestern), 4-2, in the finals. Later that week Telford defeated No. 8 Billy Smith of Rutgers, and completed Iowa’s come-from-behind dual win at Ohio State with a 4-0 shutout against No. 10 Nick Tavanello. For his efforts he was also named USA Wrestling Athlete of the Week.

TICKET INFORMATION
Single dual tickets are now available for purchase on hawkeyesports.com. Single dual tickets are $12 for duals against Illinois (Jan. 16), Northwestern (Jan. 23), and Michigan (Feb. 13). Youth tickets (18 and younger) are $8. UI students and kids five-years old and younger are admitted free. Adult tickets are $15 for Virginia (Feb. 15) — Iowa’s opening round opponent of the Cliff Keen National Duals. Tickets to the second round of the Cliff Keen National Duals (Feb. 21-22) — featuring eight teams and three rounds of competition — are $10 for Saturday’s quarterfinals and semifinals, and $20 for Sunday’s final round.

HAWKEYES ON TV
Iowa’s regular season duals Minnesota, and Penn State will air live on BTN. The Hawkeyes wrestle at Minnesota on Jan. 30 at 6 p.m. (CT), and at Penn State on Feb. 8 at 12 p.m. BTN will televise the semifinal and final rounds of the Cliff Keen National Duals, hosted by the University of Iowa on Feb. 21-22. The semifinals will air Saturday on BTN at 3 p.m. The finals will be televised Sunday at 11:30 a.m. BTN is televised the final round of the Midlands Championships, and will televise the final round of the Big Ten Championships on March 8, 2015, at 2 p.m. The 2015 conference tournament is hosted by Ohio State.