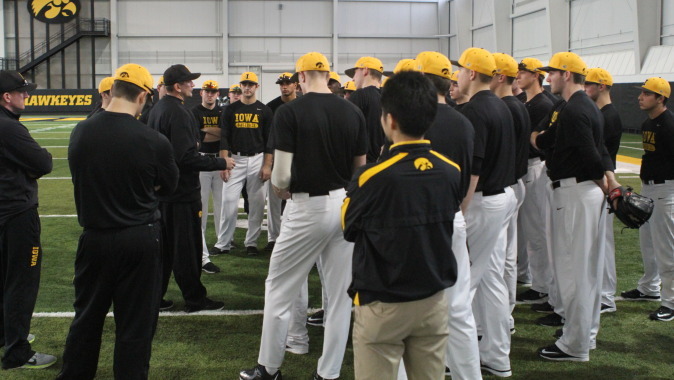 IOWA CITY, Iowa — Friday marked the beginning of a 4 1/2 month journey with the University of Iowa baseball team officially beginning practice for the 2015 season.

“It all starts today,” UI head coach Rick Heller told his team. “I need you to work hard every day and bring somebody with you. It’s a long season and 4 1/2 months from now let’s be competing for a championship.”

The Hawkeyes started practice in the Indoor Practice Facility before catching a break from Mother Nature and moving outside. Iowa went through live hitting and fielding at Duane Banks Field, and the team expects to be able to get outside again Saturday.

“It’s huge for us to be able to be outside,” said senior Eric Toole, one of four Hawkeye captains. “We have two nice indoor facilities, but there is nothing like seeing live reads of the ball off the bat and pitchers off the mound.”

Toole says there is an excitement around the team and everyone is excited to be back to build off last season’s 30-win campaign, which included a victory in the Big Ten Tournament.

“It’s awesome getting everyone back together and having the first day of practice,” said Toole. “Everyone is ready to go and get this season underway. Good things are happening in this program.”

The Hawkeyes open the 2015 season three weeks from today at the Snowbird Baseball Classic in Port Charlotte, Florida. Iowa will face Kansas State, Saint Louis, and George Mason from Feb. 13-15.