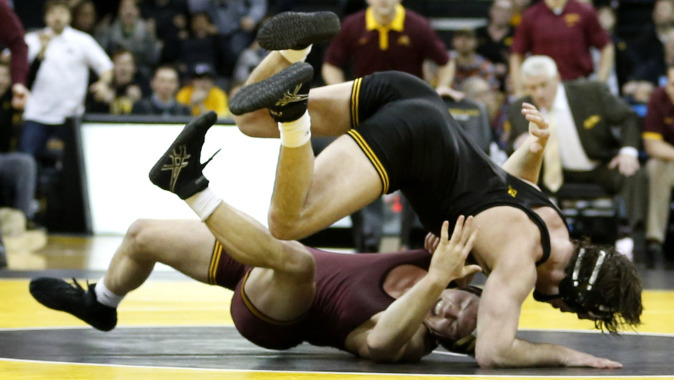 IOWA CITY, Iowa — If you could put a number to the phrase “skin of your teeth,” it appears to be ¾ of a point.

At least it is when you use the expression in context of the college wrestling rivalry between seniors Mike Evans of Iowa and Logan Storley of Minnesota.

Storley prevailed in three meetings during the 2012-13 season by scores of 4-3, 3-1, and 3-2. Evans won the only head-to-head bout in 2014, 2-1 in overtime. Combined, Storley holds a minuscule three-point edge over Evans in four matches.

Last season in Carver-Hawkeye Arena, Evans tied the team score, 12-12, by escaping in the first tiebreak period and then riding Storley for 30 seconds. The Gophers won two of the next three bouts to win the dual, 19-15.

“There will be a lot of good matchups,” UI head coach Tom Brands said. “We believe in our guy. (174) is a big match for them, too. We have a guy there who likes to back up the hype.”

During career-best 18-match winning streak, only four of Evans’ matches have been within four points. He has compiled four falls, four technical falls, and two major decisions. Twelve of the wins have come away from home, including a 16-1 technical fall over No. 18 Jordan Rogers of Oklahoma State in Gallagher-Iba Arena. Williams Arena will be just as hostile.

Since Evans and Storley have been in the varsity lineup, the series between the Hawkeyes and Gophers has been nearly as tight as results of the battles at 174. Minnesota holds a 3-2 edge in dual meets since 2011-12; during that span the Gophers have finished second, third, and second at the NCAA Championships, while Iowa has been third, fourth, and fourth.

“There is still a lot of wonderment, what does a dual meet mean?” Brands said. “It is everything. It’s the next thing on the schedule, your next test, your next assignment, your next mission. It’s a big deal and it’s a big deal to both programs.”

Action begins at 6 p.m. (CT) with BTN televising the dual.