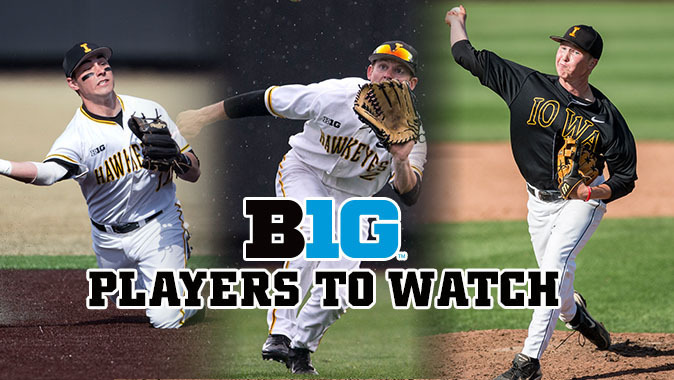 Mangler, a second baseman from Clinton, Iowa, was a second-team All-Big Ten selection as a junior after hitting .315 with 38 runs and a team-high 45 RBIs. During the year, he hit safely in 41-of-52 games and had a 29-game reached base streak. Mangler hit .382 with runners in scoring position, which led to a team-best 13 multi-RBI games.

Toole, an outfielder from Council Bluffs, Iowa, earned third-team All-Big Ten honors in 2014 — the second all-league nod of his career. Toole started 52 games as the Hawkeyes’ center fielder and leadoff hitter, where he hit .302 with 48 runs and 30 RBIs. He scored 23 runs in Big Ten games, the third most in the league.

Peyton, a first baseman/starting pitcher from Grimes, Iowa, was a strong two-way player in his first season as a Hawkeye, starting 38 games in the field and making 14 starts on the mound. Peyton was second on the team with a .331 average with 28 RBIs and 23 runs, and he went 5-1 with a 4.86 ERA on the hill.

The league office also released the 2015 Big Ten baseball preseason poll, which was comprised of a vote of the 13 head coaches. League newcomer Maryland was tabbed as the favorite followed by Nebraska, Illinois, Indiana, Michigan, and Ohio State. Only the top six teams in the voting were released.

Iowa opens the 2015 season Friday at 2 p.m. (CT) against Kansas State in the Snowbird Baseball Classic in Port Charlotte, Florida.