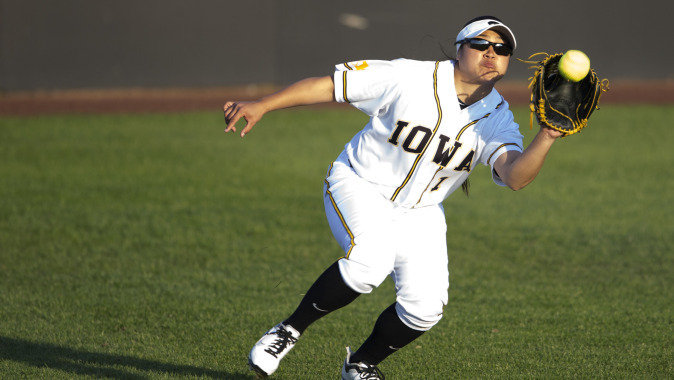 PLAY BALL
The University of Iowa softball team (3-2) travels to Gainesville, Florida, for the University of Florida Tournament on Friday and Saturday. Iowa will play a double-header against No. 1 Florida (5-0) and North Carolina State (2-3) on Saturday and conclude the weekend with another game against the Gators on Sunday.

REPOLE PLATES 7
Whitney Repole plated seven runners at the UNI Dome Tournament on Feb. 6-8. including five against Northern Iowa. The junior designated player hit .357 on the weekend, recording five hits in 14 at bats. Repole is batting .400 (4-10) with runners in scoring position and .600 (3-5) with two outs.

BATS COME TO LIFE AT UNI
After falling to Drake,8-0, in the 2015 season opener, the Hawkeyes bats came to life against Northern Iowa. Iowa plated 12 runs on 13 hits in the contest. Leadoff hitter Sammi Gyerman and designated player Whitney Repole led the way for the Hawkeyes with 3 hits each. Repole recorded 5 RBIs in the contest.

SCOUTING FLORIDA
The Florida Gators posted a 55-12 overall record in 2014 to become the NCAA National Champions. The Gators defeated Alabama two games to none in the final of the Women’s College World Series. Florida has a perfect 5-0 record and is ranked No. 1 this week’s top 25 polls. The Gators defeated Hampton (17-0), No. 7/8 Michigan (2-1), Illinois State (8-0), Jacksonville (9-0) and USF (10-5) in the USF Softball Classic on Feb. 6-8. The Gators hold a 1-2 advantage in the all-time series.

SCOUTING NORTH CAROLINA STATE
The North Carolina State Wolfpack finished 36-18 overall and 16-8 (4th) in the ACC in 2014. The Wolfpack are 2-3 on the season with all three losses coming to ranked opponents. NC State lost to No. 7/8 Louisiana-Lafayette and dropped two to No. 16 LSU. The Hawkeyes hold a 1-0 lead in the all-time series.

IN THE RANKINGS – B1G
Four Big Ten teams appeared the ESPN.com/USA Softball Collegiate Top 25 released Feb. 10. No. 7 Michigan, No. 12 Minnesota, and No. 20 Nebraska are ranked within the top 25, while Ohio State is receiving votes.

SCHEDULE AT A GLANCE
The Hawkeyes compete in six non-conference tournaments before opening Big Ten play. Iowa opens conference action on March 20 when it hosts Maryland at Pearl Field in Iowa City, Iowa.

GAME DAY ATMOSPHERE ADDITION
Hawkeye softball added a video scoreboard to their game day atmosphere in 2014. The board, which is approximately 16-feet tall and 28-feet wide, was a repurposed video wall from football’s Kinnick Stadium. A border of Iowa softball accolades surrounds the video scoreboard and completes the new look. The video scoreboard made its debut at the 2014 home opener against Drake on April 2, 2014. Since then, it has been used to show in-game highlights, introductory videos, graphics, advertisements and additional content.

HAWKEYE TRADITION
Iowa has made four Women’s College World Series appearances (1995, 1996, 1997, 2001) and played in 16 NCAA Tournaments in school history. The 16 appearances are the second most in Big Ten history, and the four WCWS appearances equal the second most in conference history. The Hawkeyes have won four Big Ten Conference regular season championships (1989, 1997, 2000, 2003) and two Big Ten Tournament titles (2001, 2003).