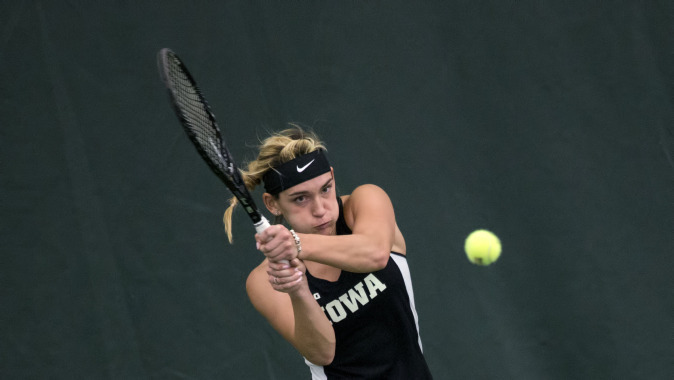 THIS WEEK FOR THE HAWKEYES
The University of Iowa women’s tennis team returns home to host the University of Oklahoma on Friday. Competition begins at 2:30 p.m. (CT) at the Hawkeye Tennis and Recreation Complex.

IOWA OPENS THE SEASON WITH A 4-1 RECORD
Iowa is 4-1 for the first time since 2011. That season the Hawkeyes lost to No. 6 Notre Dame to start the season, but went on a five-match win streak. Iowa beat Eastern Michigan, Kansas State, Kansas, Marquette, and Iowa State on the run, taking down Kansas State and Kansas on the road.

QUOTING @COACHKDOUGH
“We’re looking forward to hosting Oklahoma Friday. They’re a strong team and off to a good start, playing a top 35 team at home is a great opportunity for us.”

GOING AGAINST THE SOONERS
Iowa trails the all-time series against Oklahoma, 4-0. The last meeting between the schools swung in No. 28 ranked Oklahoma’s favor as it collected a 6-1 win at home last season.

UNDEFEATED HAWKEYES
Iowa traveled to Eugene, Oregon, to take on the Montana Griz and Oregon Ducks on Feb. 14 and 15, respectively. Senior Shelby Talcott collected her fifth straight win of the season and holds an undefeated singles record of 5-0 at the No. 1 position. Three of her teammates also hold undefeated records, including senior Ellen Silver (3-0), junior Annette Dohanics (3-0), and freshman Zoe Douglas (2-0).

SENIORS DELIVERING
The Hawkeye roster features four seniors who were tabbed the No. 18 recruiting class in the country four years ago. Shelby Talcott, Katie Zordani, Ellen Silver and Morven McCulloch have a combined 15-3 singles record this season. Silver and Zordani are the only seniors to have paired up for doubles play and currently hold a 1-0 record as a duo.

TAKING DOWN RANKED OPPONENTS
Last season, the Hawkeyes beat three ranked opponents, the most since Dougherty’s first season when Iowa overcame five ranked competitors. The most recent win was against No. 42 Illinois, 4-3, in Champaign, Ill. on April 12, 2014.

COMING UP FOR THE HAWKEYES
Iowa women’s tennis returns to action on Feb. 28, hosting Purdue at the Hawkeye Tennis and Recreation Complex. The dual is set to begin at 2:30 p.m (CT).