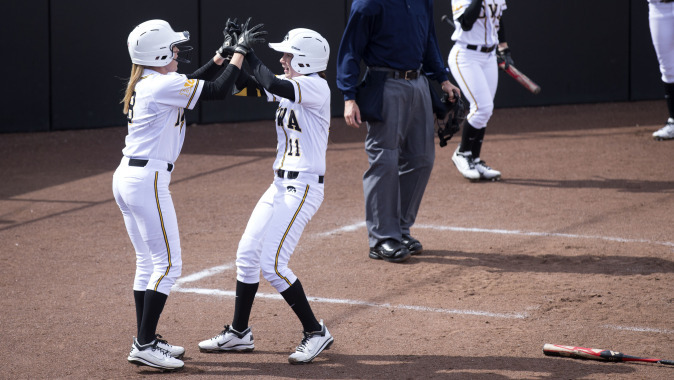 PLAY BALL
The University of Iowa softball team (3-5) travels to Lafayette, Louisiana, for the Ragin’ Cajun Invitational this weekend. Iowa will play a doubleheader against Hofstra (2-3) and No. 6 Louisiana-Lafayette (9-0) on Friday, a twinbill against Hofstra and Missouri State (6-4) on Saturday, and conclude the weekend with another game against Missouri State on Sunday.

FOLLOW THE ACTION
Fans can follow all the action with live stats. Links can be accessed on the softball schedule page at hawkeyesports.com. For in-game updates, follow @IowaSoftball on Twitter and “like” our official page on Facebook, facebook.com/iowahawkeyessoftball. A live stream is available for Iowa’s game against tournament host Louisiana-Lafayette on Friday. Fans can keep up with the action at the tournament central page HERE.

GYERMAN LEADING THE WAY
Sammi Gyerman leads the team in hits (8) and batting average (.348) through the first eight games of the 2015 season. The redshirt sophomore has eight hits in 23 at bats this season. She has reached base successfully in five-straight games and has recorded at least one hit in Iowa’s last four games.

SIBLING RIVALRY
Junior Whitney Reople’s twin sister, Katie, plays for Louisiana-Lafayette. The junior transferred to Louisiana-Lafayette after two seasons at Illinois. Friday marks the third consecutive year the Repole sisters will face off in a series or tournament. The Repole’s are a competitive family that keeps score of their daughters’ rivalry. Katie currently holds a 4-2 advantage.

STARKENBURG STRIKEOUTS
Redshirt sophomore Shayla Starkenburg has recorded at least six strikeouts in every start this season. Starkenburg fanned a career high eight batters in seven innings of no-hit work against Southern Utah on Feb. 7. She has 35 strikeouts in 30.2 innings this season — more than half of her total from last season (51 strikeouts; 78.1 innings).

SCOUTING HOFSTRA
Hofstra is 2-3 on the season and receiving votes in the latest USA Today/NFCA Division I Top-25 Poll. Hofstra is coming off its 15th NCAA appearance and has qualified for the NCAA Regionals for three consecutive seasons from 2012-14. Iowa holds a 3-1 record in the all-time series. The teams last met in the 2003 NCAA Tournament where Iowa notched a 3-0 win in the Lincoln Regional in Nebraska.

SCOUTING LOUISIANA-LAFAYETTE
Louisiana-Lafayette is currently ranked No. 6 in the latest USA Today/NFCA Division I Top-25 Poll. The Ragin’ Cajuns own a 9-0 record and have been ranked in the Top 10 since the preseason. Louisiana-Lafayette advanced to the Women’s College World Series last season with an overall record of 49-10-1. The Ragin’ Cajuns hold a 3-2 advantage in the all-time series.

YOWAYS IN A NEW ROLE
Freshman Ashley Yoways was recruited as an infielder, but she is now finding success in the circle for the Hawkeyes. Yoways notched her first career win against Northern Iowa on Feb. 6. She has started three games for the Hawkeyes this season.

IN THE RANKINGS – B1G
Three Big Ten teams appeared the USA Today/NFCA Division I Top-25 Poll released Feb. 17. No. 5 Michigan and No. 15 Minnesota are ranked within the top 25, while Nebraska is receiving votes.

GAME DAY ATMOSPHERE ADDITION
Hawkeye softball added a video scoreboard to their game day atmosphere in 2014. The board, which is approximately 16-feet tall and 28-feet wide, was a repurposed video wall from football’s Kinnick Stadium. A border of Iowa softball accolades surrounds the video scoreboard and completes the new look. The video scoreboard made its debut at the 2014 home opener against Drake on April 2, 2014. Since then, it has been used to show in-game highlights, introductory videos, graphics, advertisements and additional content.

HAWKEYE TRADITION
Iowa has made four Women’s College World Series appearances (1995, 1996, 1997, 2001) and played in 16 NCAA Tournaments in school history. The 16 appearances are the second most in Big Ten history, and the four WCWS appearances equal the second most in conference history. The Hawkeyes have won four Big Ten Conference regular season championships (1989, 1997, 2000, 2003) and two Big Ten Tournament titles (2001, 2003).