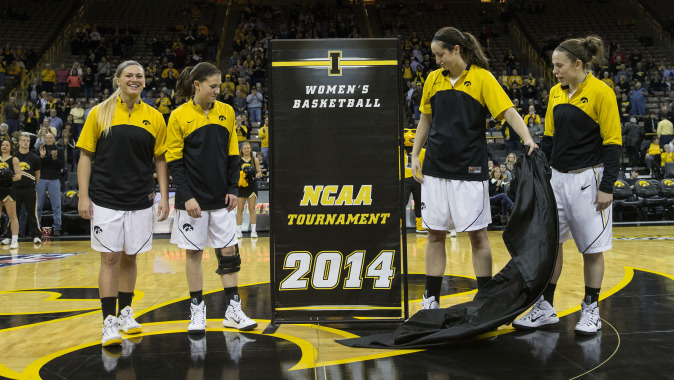 WATCH THE ACTION:
Sunday’s contest will be broadcast live on BTN and BTN2Go. Eric Collins and Shelley Till will call the action. Iowa is 18-2 when playing on BTN since the start of last season.

AUDIO COVERAGE:
Brent Balbinot and Kristi Faulkner will call the action for the Hawkeye Radio Network. Hawkeye fans can listen to the contest on the Hawkeye Radio Network (AM-800 KXIC in Iowa City, AM-1360 KMJM in Cedar Rapids, AM-1040 WHO in Des Moines) or on the Hawkeye All-Access page of hawkeyesports.com. Balbinot is in his 11th season as Iowa’s play-by-play voice. Faulkner ranks 21st in program history in scoring (1,242).

QUICK HITS:
? The Hawkeyes are 15-0 at home this season, tying the program record for home wins in a single season. Iowa finished 15-0 in 1992-93, and advanced to the NCAA Final Four that season. The Hawkeyes have finished undefeated at home four times (1987-88, 14-0; 1988-89, 14-0; 1992-93, 15-0; 1995-96, 14-0).
? The University of Iowa will honor seniors Melissa Dixon, Bethany Doolittle, Samantha Logic, and Kathryn Reynolds following the conclusion of the game. The #CourFour is Iowa’s winningest graduating class in 21 years, in terms of total victories over four seasons.
? Iowa is ranked No. 17 in the Associated Press Top-25 poll and No. 16 in the USA Today Coaches poll. Iowa has been ranked in all 16 weeks this season.
? Iowa’s NCAA RPI (Feb. 28) is No. 8. Iowa is 11-5 against teams in the top 55 of the RPI.
? Iowa has won 10-straight regular season home finales.
? Samantha Logic and Ally Disterhoft were both named Academic All-Americans, representing 2-of-15 student-athletes nationally to earn the honor.
? Logic, the NCAA’s active career assists leader (831), is the first player in NCAA history to record at least 1,400 career points, 800 rebounds, 800 assists, and 200 steals.
? Iowa set the school record for scoring offense (78.2) last season, leading the league in scoring while notching the second-most points in a season in Big Ten history (2,814). The Hawkeyes rank eighth nationally this season (79.4).
? Iowa is the only Big Ten team, and one of only 14 teams in the country, to appear in the last seven NCAA Tournaments. There are 349 Division I teams.

#COREFOUR:
? The University of Iowa will honor seniors Melissa Dixon, Bethany Doolittle, Samantha Logic, and Kathryn Reynolds following the conclusion of the game.
? The group has led Iowa to 89 victories over the last four seasons, and the NCAA Tournament in each of the last three years.
? The #CoreFour is Iowa’s winningest (89 wins in four years) graduating class in 21 years, in terms of total victories. The 1994 class had 94 total wins. The 1990 class holds the record with 105 wins in four seasons.

HAWKEYES IN BIG TEN PLAY:
Iowa head coach Lisa Bluder is a three-time Big Ten Coach of the Year (2001, 2008 and 2010). She has guided Iowa to 11 upper-division finishes in the Big Ten in 15 seasons. Iowa won a share of the Big Ten regular season championship in 2008 and finished in a three-way tie for second in 2009. The Hawkeyes clinched a share of the title in 2008 with a win at Wisconsin in the regular season finale (March 2, 2008).

Since the 2008 season, Iowa has finished first once, second three times, third twice, fourth once, and seventh once.

LOGIC NAMED LIEBERMAN AWARD FINALIST FOR 2ND-STRAIGHT YEAR:
Senior point guard Samantha Logic has been named a finalist for the 2015 Nancy Lieberman Award, the Naismith Memorial Basketball Hall of Fame announced on Feb. 23. It marks the second-straight year Logic has been named a finalist. The award recognizes the top point guard in women’s NCAA Division I college basketball. Candidates exhibit the floor leadership, play-making and ball-handling skills of Hall of Famer Nancy Lieberman.

MOVING UP CAREER CHARTS:
? Samantha Logic (840 career assists) surpassed Cara Consuegra (1997-2001; 576) as Iowa’s all-time assists leader during Iowa’s win at Illinois on March 2, 2014, during the 2013-14 regular season finale. She is third in assists in Big Ten history. Nancy Kennelly of Northwestern is second (892) and Ohio State’s Samantha Prahalis is first (901).
? Melissa Dixon is Iowa’s career record holder for 3-pointers (311). She is third in Big Ten history. Kelly Mazzante of Penn State is second (357), while Maggie Lucas of Penn State is the Big Ten record holder (365).
? Bethany Doolittle is second all-time in program history with 251 career blocks. Morgan Johnson is first with 293.

ANOTHER TOP ATTENDANCE YEAR:
Iowa currently ranks 16th in average attendance (4,912) and 16th in total attendance (73,680). Iowa ranked 22nd in the country in attendance last season, averaging 4,395 fans per contest. Last year marked the fourth-straight season that Iowa has ranked inside the top 25 in attendance. The Hawkeyes were 19th in attendance in each of the previous two years, and were 13th in 2010.

UP NEXT:
The Hawkeyes travel to Hoffman Estates, Illinois, to compete in the 2015 Big Ten Tournament. Iowa will receive a double-bye and play Friday in the quarterfinals. Time and opponent will be announced at the conclusion of the regular season. The game will be broadcast live on BTN.