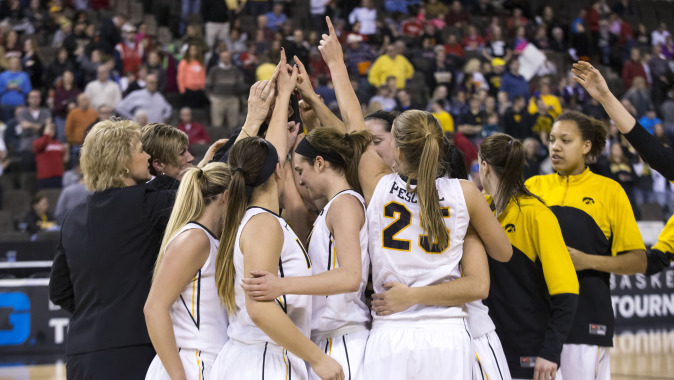 THE SETTING:
The 14th-ranked and second-seeded University of Iowa women’s basketball team (24-6, 14-4) faces No. 3 seed Ohio State(22-9, 13-5) on Saturday at 8:30 p.m. (CT) in the Big Ten Tournament semifinals at Sears Centre Arena in Hoffman Estates, Illinois. The winner advances to Sunday’s championship game (6 p.m., ESPN) to face No. 1 seed Maryland or No. 4 seed Northwestern. The Hawkeyes opened tournament action with a 74-65 victory over seventh-seeded Nebraska on Friday in the quarterfinals.

WATCH THE ACTION:
Saturday’s contest will be broadcast live on BTN and BTN2Go. Lisa Byington, Stephanie White, and Christy Winters Scott will call the action. Iowa is 20-2 when playing on BTN since the start of last season. BTN will carry 10 games of the Big Ten Women’s Basketball Tournament on Thursday, Friday, and Saturday, while Wednesday’s opening games will appear on BTN Plus. The championship game will be televised by ESPN.

QUICK HITS
? Iowa, the No. 2 seed, defeated Nebraska, the No. 7 seed, 74-65, for the third time this season on Friday night in the quarterfinals to advance to the semifinals for the second-straight season, and 10th time overall.
? Iowa defeated Ohio State in the Big Ten Tournament semifinals a year ago, 77-73.
? Ohio State’s Kelsey Mitchell leads the nation in 3-pointers per game (3.68), while Iowa’s Melissa Dixon is second (3.67).
? Iowa advanced to the Big Ten Tournament title game last year. The Hawkeyes have won two tournament titles (1997, 2001), and advanced to four championship games.
? Samantha Logic (first team), Melissa Dixon (second), Ally Disterhoft (second), and Bethany Doolittle (second) earned All-Big Ten honors. Iowa equaled Maryland for the most all-league selections.
? Iowa’s senior class — Melissa Dixon, Bethany Doolittle, Samantha Logic, and Kathryn Reynolds — is the program’s winningest graduating class in 21 years, in terms of total victories over four seasons (91 wins).
? Iowa is ranked No. 14 in the Associated Press Top-25 poll and No. 15 in the USA Today Coaches poll. Iowa has been ranked in all 17 weeks this season.
? Iowa’s NCAA RPI is No. 8. Iowa is 13-5 against teams in the top 50 of the RPI.
? Samantha Logic and Ally Disterhoft were both named Academic All-Americans, representing 2-of-15 student-athletes nationally to earn the honor. Iowa is the only Division I school in the nation to have two honorees.
? Logic, the NCAA’s active career assists leader (859), is the first player in NCAA history to record at least 1,400 career points, 800 rebounds, 800 assists, and 200 steals.
? Iowa is the only Big Ten team, and one of only 14 teams in the country, to appear in the last seven NCAA Tournaments. There are 349 Division I teams.

BIG TEN TOURNAMENT NOTES:
? The 14th-ranked Hawkeyes finished second in the Big Ten and earned the No. 2 seed in the 2015 Big Ten Conference Tournament. The tournament, set for March 4-8, features a five-day format for the first time in conference history. Iowa earned a double-bye in the inaugural 14-team format.
? The Hawkeyes fell short of their quest to win four games in four days in last year’s Big Ten Tournament, falling to Nebraska in the Big Ten title game, 72-65. Iowa defeated Illinois in the first round (81-62), and Purdue in the quarterfinals (87-80), before downing Ohio State in the semifinals (77-73). Ally Disterhoft, Bethany Doolittle, and Samantha Logic were all selected to the Big Ten All-Tournament Team.
? Iowa is making its second-straight semifinal appearance and 10th overall.
? Iowa is 21-18 all-time in the Big Ten Tournament; only three schools have won more tournament games.
? The Hawkeyes have claimed two tournament titles (1997, 2001), and made four championship game appearances.
? Iowa (5-1 all-time as the No. 2 seed) won the tournament as a No. 2 seed in Lisa Bluder’s first season as head coach (2001), and advanced to the semifinals as the second seed in 2008.

4 HAWKEYES EARN ALL-BIG TEN HONORS:
? Samantha Logic, Melissa Dixon, Ally Disterhoft, and Bethany Doolittle have earned All-Big Ten honors.
? For the second-straight year, Logic has been named a unanimous first team selection by the coaches, and a first team selection by the media.
? Logic becomes the first Hawkeye since Kachine Alexander (2010, 2011) to earn multiple first-team All-Big Ten honors, and the ninth in program history. The team co-captain has been honored by the Big Ten in all four years, earning third team honors as a sophomore, while being named to the All-Freshman Team in 2012.
? Dixon and Disterhoft earned second team honors from both the coaches and the media, while Doolittle earned second team honors from the coaches, and honorable mention honors from the media. Dixon also earned Iowa’s Sportsmanship Award nomination.
? Iowa equaled Maryland for the most all-league selections.
? Iowa’s four selections are the most since 2009. The Hawkeyes have had three All-Big Ten honorees in each of the previous five years.

LOGIC NAMED BIG TEN AND NATIONAL PLAYER OF THE WEEK:
? Senior point guard Samantha Logic was named Big Ten Player of the Week and ESPN’s National Player of the Week on March 2.
? The laurel marked Logic’s sixth career weekly honor.
? Logic averaged 22 points, eight rebounds, and 11 assists per game last week, leading the Hawkeyes to wins over Wisconsin and Minnesota. Against the Badgers, she finished one assist shy of her sixth career triple-double, registering 20 points, 10 rebounds, and ninevassists. In the Senior Day win over the Gophers, Logic recorded her 30th career double-double, recording 24 points and 13 assists, to go along with six rebounds.

#COREFOUR:
? The University of Iowa honored seniors Melissa Dixon, Bethany Doolittle, Samantha Logic, and Kathryn Reynolds following the conclusion of Iowa’s win over Minnesota on March 1.
? The group has led Iowa to 91 victories over the last four seasons, and the NCAA Tournament in each of the last three years.
? The #CoreFour is Iowa’s winningest (91 wins in four years) graduating class in 21 years, in terms of total victories. The 1994 class had 94 total wins. The 1990 class holds the record with 105 wins in four seasons.

HAWKEYES IN BIG TEN PLAY:
Iowa head coach Lisa Bluder is a three-time Big Ten Coach of the Year (2001, 2008 and 2010). She has guided Iowa to 11 upperdivision finishes in the Big Ten in 15 seasons. Iowa won a share of the Big Ten regular season championship in 2008 and finished in a three-way tie for second in 2009. The Hawkeyes clinched a share of the title in 2008 with a win at Wisconsin in the regular season finale (March 2, 2008). Since the 2008 season, Iowa has finished first once, second three times, third twice, fourth once, and seventh once. Iowa finished second in the inaugural 14-team league in 2015.

LOGIC NAMED LIEBERMAN AWARD FINALIST FOR 2ND-STRAIGHT YEAR:
? Senior point guard Samantha Logic has been named a finalist for the 2015 Nancy Lieberman Award, the Naismith Memorial Basketball Hall of Fame announced on Feb. 23. It marks the second-straight year Logic has been named a finalist.
? The award recognizes the top point guard in women’s NCAA Division I college basketball. Candidates exhibit the floor leadership, play-making and ball-handling skills of Hall of Famer Nancy Lieberman.

#LOGICALCHOICE:
? Hawkeye guard Samantha Logic was named one of 10 finalists for the 2014-15 Senior CLASS Award on Feb. 12.
? Nationwide fan voting has begun to select the winner at seniorclassaward.com.
? Fans can vote for Logic — the #LogicalChoice — once per day on every device until March 23.
? The Racine, Wisconsin, native is the lone finalist from the Big Ten Conference.
? An acronym for Celebrating Loyalty and Achievement for Staying in School, the Senior CLASS Award focuses on the total student-athlete and encourages students to use their athletic platforms to make a positive impact as leaders in their communities.
? To be eligible for the award, student-athletes must be classified as NCAA Division I seniors and have notable achievements in four areas of excellence: community, classroom, character and competition.

THE TOP 3-POINT SHOOTER IN THE LAND:
? Iowa senior Melissa Dixon is second in the nation in 3-point field goals per game, averaging 3.67. Ohio State’s Kelsey Mitchell is first at 3.68.
? Dixon is second in the Big Ten and sixth nationally in 3-point percentage (44.9%).
? Dixon has made 110 in 30 games, while Ohio State’s Kelsey Mitchell has made 114 in 31 games. No other player in the country has converted more than 94. Dixon has attempted 245 3-pointers this year, and Mitchell has attempted 303.
? Dixon is third in Big Ten history with 320 career 3-pointers. She is five 3-pointers from the NCAA’s all-time top-25 list, and third in career 3-pointers among active players.
? Dixon has set an arena record at four venues this season (Iowa – 8, Illinois – 8, Drake – 10, Northwestern – 9).
? Dixon made six 3-pointers (6-of-10) in the win at Rutgers on Jan. 4, surpassing Lindsey Meder (261) for the most in Iowa history.
? She scored 31 points in Iowa’s win at Drake on Dec. 21, making 10 3-pointers (10-of-14), setting a new school record. The previous school record was seven, accomplished five times in program history, twice by Dixon; the NCAA and Big Ten record for 3-pointers in a single game is 12.
? Dixon finished 9-of-10 from 3-point range in Iowa’s 102-99 win at Northwestern (Jan. 29).
? Dixon finished 8-of-11 from 3-point range in the Senior Day win over Minnesota (March 1), marking the fourth game this season she has made at least eight 3-pointers in a game (10 at Drake, 8 at Illinois, 9 at Northwestern). The eight 3-pointers set a new Carver-Hawkeye Arena record.

MOVING UP CAREER CHARTS:
? Samantha Logic (859 career assists) surpassed Cara Consuegra (1997-2001; 576) as Iowa’s all-time assists leader during Iowa’s win at Illinois on March 2, 2014, during the 2013-14 regular season finale. She is third in assists in Big Ten history. Nancy Kennelly of Northwestern is second (892) and Ohio State’s Samantha Prahalis is first (901). She ranks 15th in NCAA history in assists.
? Melissa Dixon is Iowa’s career record holder for 3-pointers (320). She is third in Big Ten history. Kelly Mazzante of Penn State is second (357), while Maggie Lucas of Penn State is the Big Ten record holder (365).
? Bethany Doolittle is second all-time in program history with 264 career blocks. Morgan Johnson is first with 293. Doolittle needs 10 blocks for ninth in Big Ten history.

NCAA STREAK BEST IN BIG TEN:
Iowa is the only Big Ten team, and one of only 14 teams in the country, to appear in the last seven NCAA Tournaments. There are 349 Division I teams. Iowa is 1-of-21 teams to advance to the Second Round of the NCAA Tournament in each of the last two seasons. The Hawkeyes, a No. 6 seed in the 2014 NCAA Tournament, defeated 11th-seeded Marist in the First Round, 87-65, marking the fourth-largest margin of victory in an NCAA Tournament game in program history.

UP NEXT:
The Hawkeyes will make their eighth-straight appearance in the NCAA Tournament.