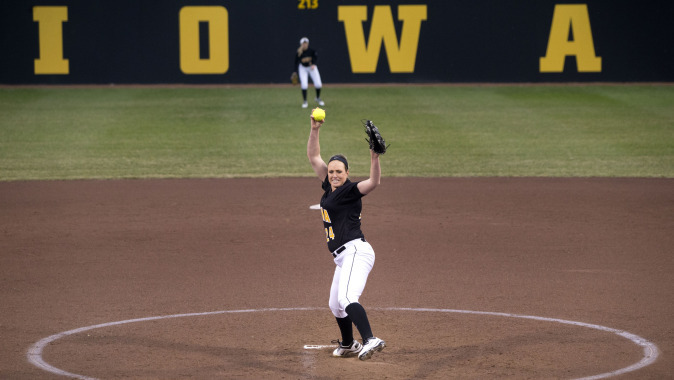 BACK-TO-BACK
Redshirt sophomore Sammi Gyerman and senior Megan Blank delivered back-to-back home runs in the top of the fourth inning to help Iowa register a 12-11 victory over Cal State Fullerton on March 7. Gyerman’s three-run blast was the first of her career, while Blank’s was the 19th of her career and first of the season. It marked the first time Iowa recorded back-to-back home runs since April 21, 2013.

CAREER GAME FOR GYERMAN
Redshirt sophomore Sammi Gyerman registered the first two home runs of her career against Cal State Fullerton on March 7. The San Pedro, California, native sent a three-run shot over the center field fence in the top of the fourth inning before putting a solo shot over the left field wall in the top of the seventh. Gyerman recorded a career high four RBIs and tied her career high in hits (3) and runs scored (3).

DOUBLE PLAYS
Iowa ranks second in the Big Ten in fielding double plays. The Hawkeyes have turned 11 double plays on the season, including two against No. 6 Louisiana-Lafayette on Feb. 20.

DOUBLE TROUBLE
The Hawkeyes are tied for fourth in the Big Ten in doubles. Iowa has recorded 31 doubles on the season. Senior Megan Blank leads the team with six, while redshirt sophomore Sammi Gyerman, sophomore Kaitlyn Mullarkey, redshirt junior Holly Hoffman and junior Whitney Repole each have three.

STARKENBURG STRIKEOUTS
Redshirt sophomore Shayla Starkenburg ranks fourth in the Big Ten in batters struck out (79) and ties for third in batters struck out looking (19). Starkenburg fanned a career high nine batters against Florida A&M on March 1. She recorded her first career no-hitter against Southern Utah on Feb. 7. The Ankeny, Iowa, native has 79 strikeouts in 88.2 innings this season. Starkenburg has already registered more strikeouts than she did in 20 appearances last season (51).

SCOUTING EAST CAROLINA
East Carolina owns a 7-16 record this season. The Pirates finished 28-20 overall and 14-10 in the American Athletic Conference in 2014. The all-time series is currently tied at one game apiece.

SCOUTING OKLAHOMA
No. 6 Oklahoma holds an 18-3 record this season. The Sooners finished 51-13 last season and won the Big-12 with a 16-2 record. Oklahoma advanced to the Women’s College World Series before falling, 4-2, to Oregon. The Sooners hold a 7-4 advantage in the all-time series.

SCOUTING TULSA
The Golden Hurricanes are 12-7 this season. Tulsa posted a 53-9 overall record last season and won the Conference USA regular season (19-4) and tournament titles. Tulsa advanced to its fourth straight NCAA Regional. The all-time series is currently tied at one game apiece.

MULLARKEY, ERICKSON PROVIDE OFFENSE
Junior Erin Erickson and sophomore Kaitlyn Mullarkey recorded solo homeruns against Missouri State on Feb. 22. Erickson sent her first homerun of the season and the fifth of her career over the center field wall. Mullarkey’s blast was the second of her career and her first of the season.

IN THE RANKINGS – B1G
Two Big Ten teams appeared the USA Today/NFCA Division I Top-25 Poll released March 3. They include No. 3 Michigan and No. 16 Minnesota.

RACTICE FACILITY
The Hawkeyes have benefited from two new facilities in 2015 — the indoor Iowa Turf Facility, located at the Hawkeye Tennis and Recreation Complex, and the Jacobson Hitting Facility, located in football’s former weight room. The HTRC Iowa Turf Facility has enabled the program to have consistency in team practices, while the Jacobson hitting cages have allowed student-athletes to take extra reps at any time.