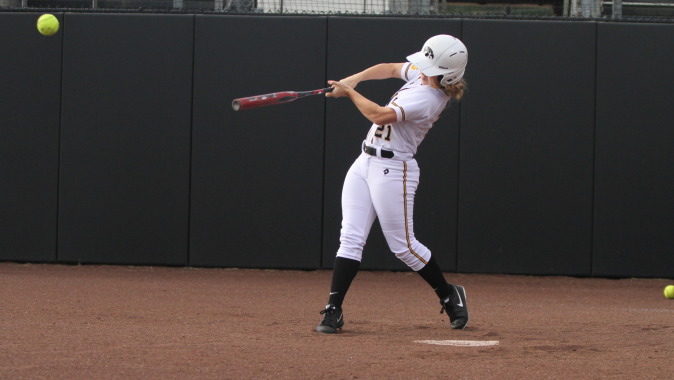 TULSA, Okla. — The University of Iowa softball team used three home runs to defeat Tulsa, 7-6, Wednesday afternoon. The Hawkeyes improve to 9-20 with the win, while the Golden Hurricanes fall to 16-9.

Sammi Gyerman led the Hawkeyes at the plate with a 3-for-3 effort. The redshirt sophomore recorded a single, two home runs and a walk in the contest. The San Pedro, California, native plated four of Iowa’s seven runs.

After trading zeros the first two innings, the Hawkeyes reached the scoreboard in the top of the third. Gyerman sent the third home run of her career over the left field fence to give Iowa a 1-0 lead.

The Tulsa lead did not last long as the Iowa bats came to life in the top of the fifth. Redshirt junior Holly Hoffman led off the inning with a pinch-hit single. Freshman Allie Wood followed with a single to center, and sophomore Claire Fritsch took advantage of the RBI opportunity with a single to left. Gyerman stepped up to the plate with two runners on and delivered her second blast of the game – the fourth of her career – to tie the game at 5. Senior Megan Blank added to the Hawkeye rally with a solo shot to center to give Iowa a 6-5 lead. Blank’s blast was the 21st of her career and third of the season.

“I liked how we jumped out early,” said head coach Marla Looper. “Unfortunately we allowed them to go ahead, but we did a really nice job of fighting right back.”

Tulsa got a run back in the bottom of the sixth. The Golden Hurricanes used a walk and a double to plate the tying run.

The Hawkeyes showed resiliency and scored the go-ahead run in the top of the seventh. Junior Erin Erickson and Gyerman reached on back-to-back walks to start the inning, and Blank trailed with a line drive single to the Tulsa pitcher. With the bases loaded sophomore Alyssa Navarro drew an RBI walk to give Iowa the 7-6 lead.

Shayla Starkenburg (7-12) was credited with the win. The redshirt sophomore allowed one earned run on one hit in 3.2 innings. Starkenburg notched three key strikeouts in the final two innings to help secure the Iowa victory. Freshman Ashley Yoways got the start in the circle. The Cedar Lake, Indiana, native allowed four earned runs on seven hits in 3.1 innings.

The Hawkeyes open the Big Ten season with a three-game series against Maryland at home March 20-22. The series begins with a 4 p.m. (CT) game Friday, continues with a 2 p.m. (CT) contest Saturday, and concludes with a 1 p.m. (CT) game Sunday.

“We had some nice plays today,” said Looper. “Overall it was a great effort. We still have stuff to be better at, but I was proud of the girls and how they came back. It’s been a long road trip and we are ready to get home and play on our own field.”