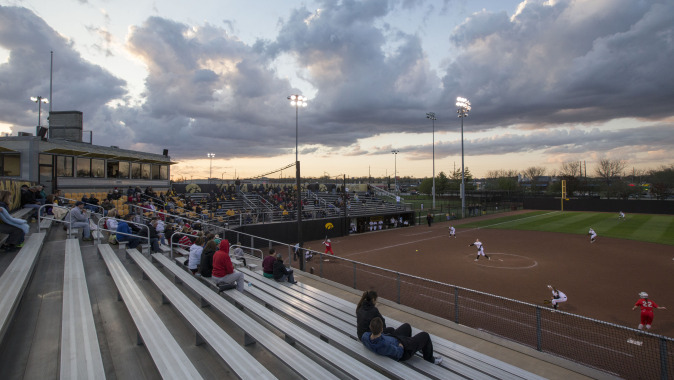 PLAY BALL
The University of Iowa softball team (9-20) hosts Maryland in its Big Ten and home opener this weekend. The series begins with a 4 p.m. (CT) game Friday, continues with a 2 p.m. (CT) contest Saturday, and concludes with a 1 p.m. (CT) game Sunday.

SEE IT LIVE
Fans can watch all three games of the series online. Friday and Saturday contests will be streamed on Hawkeye All-Access available at hawkeyesports.com, while Sunday’s game will be shown on BTN Plus online at btn2go.com.

LIVE ALTERNATIVES
Audio for every game this weekend will be available on Hawkeye All-Access online at hawkeyesports.com. Jon Swisher will have the call on Friday, with Rob Brooks taking the reins for Saturday and Sunday broadcasts. Gametracker is also available for all games at Pearl Field. Links can be accessed on the softball schedule page at hawkeyesports.com.

PROMOTIONS
? Friday: The first100 fans will receive free gold pom poms and free hot chocolate will be given away for the first 150 fans.
? Saturday: The first 250 fans at Saturday’s game will receive Iowa Softball trading cards. Kids will be allowed to run the bases following the game.
? Sunday: Fans are encouraged to wear their favorite baseball/softball team’s hat on Sunday. Free Iowa Softball visors will be given to the first 100 fans, and one lucky hat wearer will win a prize. The Hawkeyes will be available for autographs following the game.

10 STRAIGHT
Megan Blank is currently riding a10-game hitting streak. The senior has notched a .545 clip, a .970 slugging percentage and a .571 on base percentage in the last 10 games. The Culver City, California, native has registered 18 hits in 33 at bats since March 7. Eight of her 18 hits have been for extra bases (5 doubles; 3 home runs).

BLANK IN THE B1G
Megan Blank is currently ranked among the top ten in the conference in four different categories. Blank is tied for second in the Big Ten in doubles (9), third in hits (36), ninth in batting average (.424) and 10th in total bases (54).

DOUBLE PLAYS
Iowa leads the Big Ten in fielding double plays. The Hawkeyes have turned 15 double plays on the season. They have recorded two double plays in a game three times: No. 6 Louisiana-Lafayette (Feb. 20), No. 6 Oklahoma (March 15) and Tulsa (March 18).

DOUBLE TROUBLE
The Hawkeyes rank second in the Big Ten in doubles. Iowa has recorded 41 doubles on the season. Senior Megan Blank leads the team with nine, while redshirt sophomore Sammi Gyerman has five.

STARKENBURG STRIKEOUTS
Redshirt sophomore Shayla Starkenburg ranks fourth in the Big Ten in batters struck out (98) and third in batters struck out looking (27). Starkenburg has fanned a career high nine batters twice this season (Florida A&M on March 1; East Carolina on March 14. She recorded her first career no-hitter against Southern Utah on Feb. 7. The Ankeny, Iowa, native has 98 strikeouts in 116.0 innings this season. Starkenburg has already registered more strikeouts than she did in 20 appearances last season (51).

CAUGHT STEALING
Holly Hoffman is currently tied for ninth in the Big Ten in runners caught stealing. The redshirt junior has gunned down five runners this season, including two against Oklahoma State on March 17.

SCOUTING MARYLAND
Maryland currently ranks fourth in the Big Ten with a 17-11 overall record. The Terrapins are entering their first season in the Big Ten. They posted an 11-35 overall record last season and finished ninth in the ACC at 7-16. Iowa holds a 3-1 advantage in the all-time series. The Hawkeyes won the last meeting, 9-4, on March 9, 2013.

3 IN A ROW
Senior Megan Blank received her third-straight First Team All-Big Ten accolade and was also named to the conference’s All-Defensive Team, following the 2014 season. The shortstop is the eighth Iowa player to earn first team distinction three times.

Heading into her senior season, Blank ranks in several career categories at Iowa. She is second with a .398 batting average, sixth with 43 doubles, eighth with 18 home runs, ninth with 113 RBIs and 10th with 10 triples with one season remaining with the Hawkeyes. Blank led the team with 13 multiple-hit games and six multiple-RBI games, had the longest reached base streak (14) and owned the longest hitting streak (9). She ended the season with a seven-game reached base streak.