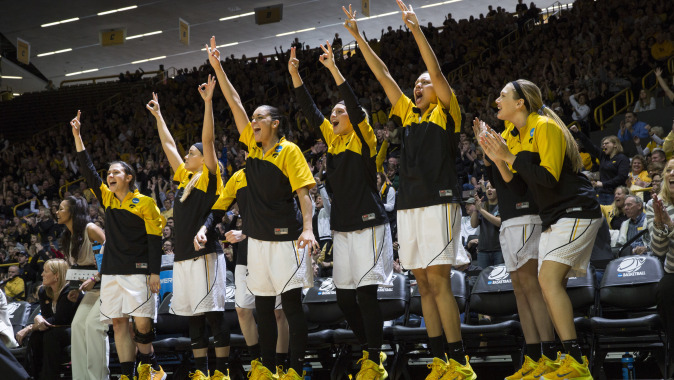 Lisa Bluder: I am almost in disbelief right now, not that we did it. We knew we were going to do it. We felt great about it. But just the way it happened. Our great crowd, I mean, our crowd was amazing today. To go 17 0 on our home court this season, with these excuse me, 18 0 see, Sam’s always correcting me. 18 0 on our home floor and with this group of four seniors has been so special.

You know, we beat a really good Miami team. Katie is an excellent coach, very talented team, a team that did great things and beat some really good people during the year. But four people in double figures, we shot the ball well again. That’s kind of our M.O.

I’m just really, really proud of our team and proud of all of our Hawkeye fans, too. They just came out and we want to share it with all of them, we really do.

Q. Could you recognize even within the first two possessions that you were not going to get any open looks, pretty much all day, unless you created them? How difficult was that once you saw that because that really limits what you can do on the arc.
Melissa Dixon: Yeah, they did a really good job of just knowing where I was at all times. But the beauty of our team is there’s so many different threats on our team that if they are going to take away my shooting; that I have four other teammates that are going to have wide open looks. You can’t take away everything on our team and if they tried to take away that, then other people are going to be open.

Q. Sam, what do you think Bethany Doolittle looked like today?
Samantha Logic: A stud. I mean, simply put. She just played one of her best games I’ve seen in a really long time, if ever. We just wanted to keep feeding her and keep going to her and if she didn’t do it, she got the O board and she got it herself. We play like that, and then you combine it with like she said, four other people on the floor that can spread you out and have so many offensive weapons, it’s going to be tough.

Q. Sam, it’s no secret that this has been a goal. Coach called this a mission since day one this year. How does it feel to finally make it?
Samantha Logic: Unbelievable. We are really excited. I think it has not even completely hit me yet. We are still playing, like Coach said, 18 0 on our floor, going to the Sweet 16 is something we’ve wanted to do since we’ve gotten here. Obviously it took four years but we’re happy to do it right now.

Q. Bethany, was this your best game?
Bethany Doolittle: I mean, with the circumstances at hand, I think it was pretty good outcome for us. I obviously don’t want this season to be over, and ending on this note at home is great, 18 0. So I think we just wanted to keep going and I wanted to play hard for my teammates and play hard for the crowd that came out today.

Q. What is it like for a starter when you see, I think the three players off the bench combined to go 7-for-9 from the field. What’s it like when you see that support coming off the bench?
Samantha Logic: It’s huge. We flow, we have that much confidence in them every single time they are on the floor. Kali played huge minutes; Lexi has played huge minutes. Chase was in there for five, but I mean, she had six points. It’s just huge. We’re so happy for our bench.

Q. For Beth, did you think you were going to get you had shots from pretty much all over the floor. Was that where you thought you would get shots today?
Bethany Doolittle: I don’t think you can ever kind of predict where you’re going to get shots but I just tried to take what was given to me and my teammates found me in the right places and I tried to get positions so they could get out better passes into me.

So it just kind of worked out in our favor today. But that’s what you look for in this kind of energy or this kind of environment, and the energy we get from our crowd here. We got the best for what we were given in the game.

Q. For all three student athletes, how will you remember this day with this crowd with the stakes this high?
Bethany Doolittle: It’s something we’ll never forget. The crowd that came out today, our friends and family supporting us, this group of girls; our awesome coaching staff, just seeing everybody in the center of the court after the game smiling, singing, dancing everything together, is just something that will be in my memory for the rest of my life. I can’t wait to keep it going.

Samantha Logic: Yeah, I think she said it all. We’ve had that much support so often since we have been here. It’s just awesome to go out and win our last game in Carver, and with those stakes so high, getting to the Sweet 16 and finally reaching that goal.

Melissa Dixon: Yeah, like the other two said, we are going to remember this forever. We are so happy, especially with the huge crowd that came out; and to play our last game in Carver and to make it to the Sweet 16 is pretty special, and we’re going to remember it forever.

Q. In the last eight minutes of the game, this team was at it’s very best, wasn’t it?
Lisa Bluder: I think we were pretty focused. I think the last three minutes took forever and I thought this team was incredibly focused; that last ten minutes, I thought we played very good basketball and we shot the ball well. And when you shoot the ball 75 percent, you’re going to be hard to beat.

Q. So much of your success has been driven by the senior class. Can you touch a little bit on the growth of the people that will be back in the program next year and how much they have contributed to this run, too?
Lisa Bluder: Well, I think our bench was really good today. The three women that did get in today, Kali Peschel, people don’t realize she’s the second best three point shooter on our team. She’s the second best free throw shooter on our team. She’s coming in and doing great things. I think she’s playing the best basketball of her career right now.

Chase Coley, she’s automatic. She has got the best left hand I’ve ever seen. We need to get her a little stronger over the summer, but we will. She obviously played well. Lex came in and did some great things for us defensively, took care of the ball.

And then the other six players, as Sam said, that didn’t get into the game today, that worked so hard every single day and don’t get the glory; and to me they are the heroes. Because you come to practice, and you give everything you have to practice without the reward of getting in, which is everybody’s ultimate reward, that’s hard work. That’s mental toughness right there.

Q. Coach Meier said that, I think I’ve got the right place in the game, they cut the lead down to six, it was 69 63, and Sam missed a free throw and then Bethany got the rebound, and then she scored on a 15 foot jumper. She said that really sort of turned the game around. Was that indicative of the kind of game Bethany played?
Lisa Bluder: Well, I thought Bethany was outstanding, and you know, she was pretty humble up here, but she’s so capable of that. I told her over and over again, I have so much confidence with the ball in your hands, and we really challenged her to rebound today and she did it.

She came out; and how important were those six offensive rebounds, and especially the one I felt like when she missed and got it on rebound and put it back in, that was big. But I mean, when you’re getting down to now you’re playing against such good competition, it’s about possessions, it’s about taking care of the ball and rebounding and today we out rebounded a pretty good basketball team by nine.

Q. Coach Meier said she was happy for you. She says you do things the right now. These kids have been here four years and you’ve been doing this for about 30. What does this mean to you?
Lisa Bluder: Do I look a lot lighter? I think there’s a monkey off my back. I feel like I might look a little bit lighter right now. You know, we’ve been there so many times, and just not been able to finish it.

This year, coming into the year, knowing that the Top 4 seeds were going to be hosting; and we started talking about it right away, how it was a different year. It was a special year with the experience that we had returning. We had so much coming back.

This group had been there. They had been there before and it’s time to be able to finally do it and to do it on Carver Hawkeye Arena floor, it’s a good feeling. Quite probably has not sunk in all the way for me yet. I’m just so happy for this group of seniors and Kathryn Reynolds in there with it, as well. She’s going to be a heck of a lawyer and I told her yesterday, she’s got one thing left to add to her resumé, she’s a Sweet 16 basketball player and today she did that for us.

Q. In the first half you didn’t shoot all that well did you notice something they changed defensively that allowed such a drastic change in the second half?
Lisa Bluder: They really spread out. They were trying to take away the three in our opinion. But again, if you take away the three, that’s fine. We were smart. We didn’t shoot a bunch then. We didn’t try to make a bunch of threes that weren’t there and I thought was really important because sometimes we really want to make those threes.

We only shot nine today and we made five of them, great percentage but what that does is open up the middle. It opened up things for Beth. It opened up drives for other players. We always felt as a team, you take away one of our weapons, we’ve got a lot more.

Q. Question on fouls, especially the first half, Miami was really racking them up. Did you and the rest of your staff get a sense of, just have to lean on them a little bit and eventually that foul trouble will decimate their offense; we saw some of that when some of their top players ran into that. Did you get a sense it was going to work out if it stayed like that in the second half?
Lisa Bluder: We felt like when their centers got in foul trouble, we really tried to isolate them with Beth because those two players are really good rebounders. And we wanted them out of the game.

And we felt like Beth had the upper hand inside, and I thought we did a really good job of iso’ing those post players and being able to get them out of the game.