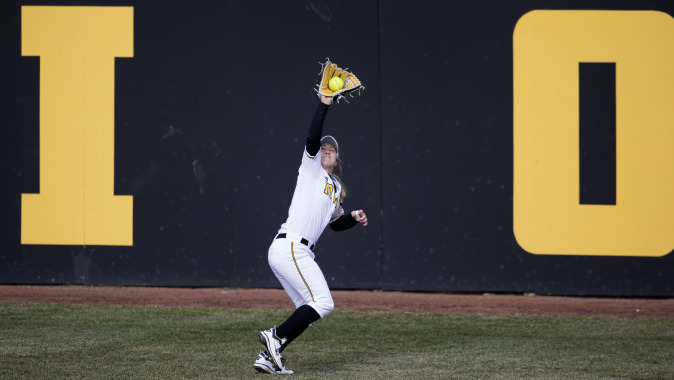 PLAY BALL
The University of Iowa softball team travels to Des Moines, Iowa, to take on Drake on Wednesday before welcoming Western Illinois to Bob Pearl Field on Thursday. Wednesday’s game is set to begin at 5:30 p.m. (CT) at Ron Buel Field, while Thursday’s action will begin at 6:30 p.m.

FOLLOW ALONG
Fans can follow the action with Gametracker (live stats). Audio will also be available on Hawkeye All-Access. Jon Swisher will call the action on Wednesday, while Rob Brooks will call Thursday’s contest. Links can be accessed on the softball schedule page at hawkeyesports.com. To receive more frequent game updates, follow @IowaSoftball on Twitter and “like” our official page on Facebook, facebook.com/iowahawkeyessoftball.

WATCH LIVE
Thursday’s contest against Western Illinois can be seen live online on BTN Plus, which is available at btn2go.com.

HOFFMAN, WOOD PROVIDE SPARK
Redshirt junior Holly Hoffman and freshman Allie Wood went yard in Iowa’s 6-4 come-from-behind triumph against No. 4 Michigan on March 29. Hoffman sent her second home run of the season and fifth of her career over the center field wall. One batter later, Wood delivered a solo shot — the fourth home run of her career — to left to pull the Hawkeyes within a run of the Wolverines.

DOUBLE PLAYS PIVOTAL IN IOWA VICTORY
Iowa turned two double plays in its 6-4 win at No. 4 Michigan on March 29. The Hawkeyed turned two to end the second inning before swinging a 4-6-3 double play in the bottom of the seventh to clear the bases and ultimately secure the upset victory. Iowa currently leads the Big Ten and ranks 12th nationally in fielding double plays. The Hawkeyes have turned two 20 times this season. They have recorded two double plays in a game five times: No. 6 Louisiana-Lafayette (Feb. 20), No. 6 Oklahoma (March 15), Tulsa (March 18), Nebraska (March 25), and No. 4 Michigan (March 29).

TOUGH OUT
Senior Megan Blank has just seven strikeouts in 105 at bats this season. Blank currently leads the team in batting average (.429), slugging percentage (.648), and on base percentage (.429).

BLANK IN THE B1G
Megan Blank is currently ranked among the top five in the conference in three different categories. The senior is tied for second in the Big Ten hits (45), tied for third in doubles (11) and fourth in batting average (.429).

DOUBLE TROUBLE
The Hawkeyes are tied for third in the Big Ten in doubles. Iowa has recorded 55 doubles on the season. Senior Megan Blank, the career doubles school record holder, leads the team with 11, while redshirt sophomore Sammi Gyerman has seven.

B1G HITS
Iowa is ranked 10th in the Big Ten in hits. Iowa has accumulated 241 hits in 37 contests this season. Senior Megan Blank leads the team with 45 hits, while redshirt sophomore Sammi Gyerman has 35.

STARKENBURG STRIKEOUTS
Redshirt sophomore Shayla Starkenburg ranks sixth in the Big Ten in batters struck out (120) and fourth in batters struck out looking (33). Starkenburg has fanned a career high nine batters twice this season (Florida A&M on March 1; East Carolina on March 14. She recorded her first career no-hitter against Southern Utah on Feb. 7. The Ankeny, Iowa, native has 110 strikeouts in 128.0 innings this season.

SCOUTING DRAKE
Drake is 16-12 on the season and 7-2 in the Missouri Valley Conference. The Bulldogs and Hawkeyes met in the 2015 season opener at the UNI Dome Tournament on Feb. 6. The Bulldogs registered the 8-0 run-rule win in six innings. Iowa holds a 35-12 advantage in the all-time series.

SCOUTING WESTERN ILLINOIS
Western Illinois is 11-12 overall and 1-4 in Summit League play. The Hawkeyes and Leathernecks last met on Feb. 24, 2013 where Iowa recorded a 12-4 run-rule victory in six innings. The Hawkeyes hold a 32-14 advantage in the all-time series.

BLANK MAKES HISTORY
Senior Megan Blank recorded her 53rd career double against Nebraska on March 25. Blank is now in sole possession of the Iowa Softball career doubles record. The previous record of 52 was set by Kari Knopf in 1997.

ON DECK
Iowa returns to Big Ten Conference action with a three-game series against Illinois. The Hawkeyes and the Fighting Illini begin their series with a 6 p.m. (CT) contest Friday, continue with a 2 p.m. game Saturday, and conclude the weekend with a 1 p.m. contest on Sunday.