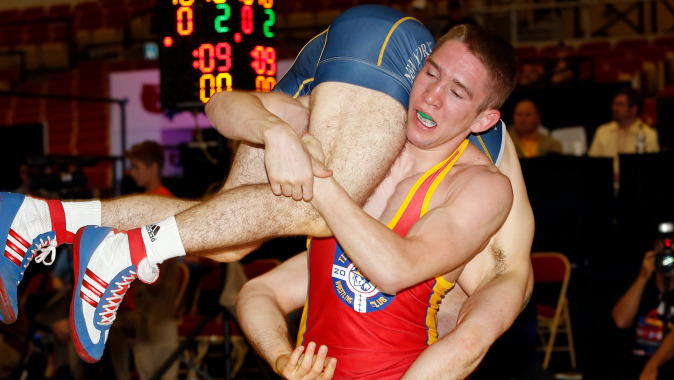 IOWA CITY, Iowa — Don’t tell Matt McDonough he is an understudy. The two-time NCAA champion is on the best freestyle wrestling team the United States can put together, and he’s planning on leading that team to the top of the world standings.

“You’re always wrestling for yourself,” McDonough said before leaving for Los Angeles to join Team USA at the 2015 Freestyle World Cup. “But now you have a team of guys who are all from the United States and we want to prove that we are the best country in the world.”

McDonough is one of 16 members of Team USA. He won a bronze medal at 57 kg at the 2014 University World Championships in Pecs, Hungary, last July, but for this event he will backup 2012 Olympic bronze medalist Coleman Scott at 61 kg.

McDonough won bronze at 61 kg at the 2015 Paris Grand Prix — winning one match by technical fall and another by fall — and it is that performance in February that likely earned him a chance to compete this weekend.

“I wasn’t surprised (to make the team), but I wasn’t on the world team last year so I wasn’t expecting it either,” McDonough said. “But that’s what you wrestle for in the winter. You wrestle the winter for the World Cup and to prove that you are one of the elite guys in the U.S. and you belong on that team. I was blessed to be asked to be on this team and it’s an honor.”

When national freestyle head coach Bruce Bennett announced Team USA’s roster in March, he said he expects the top guy at each weight class to wrestle all four matches — three in pool play, and one in the finals.

That could leave McDonough on the outside looking in. But he isn’t approaching it that way.

“I haven’t been told specifically (if I’ll wrestle),” he said. “It doesn’t change my approach. I’m planning on wrestling every match and if I don’t wrestle any matches, I’m going to be getting ready the same. I trust my coaches will keep me informed, and it’s my job to keep my body ready, keep my mind ready, and keep my heart ready.”

The World Cup is broken into two pools consisting of the top eight teams in the world. The United States’ pool includes Cuba, Mongolia and Russia. Following pool play, the U.S. will be paired against its equal placer from Pool B — Azerbaijan, Belarus, Iran, or Turkey.

The United States placed third behind Iran and Russian in 2014, but with a pair of Olympic champions on the roster (Jordan Burroughs and Jake Varner) and a trio of Hawkeyes (McDonough, Brent Metcalf, and Tony Ramos) it is among the favorites to win what is considered one of the top international events of the year, behind only the Olympic Games and World Championships.