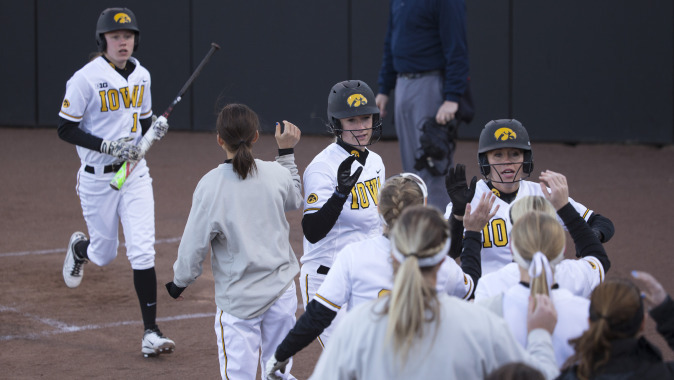 MADISON, Wis. — The University of Iowa scored 10 runs in the first frame — the second-most runs allowed by the Badgers in an inning — and never let up to secure its 16-4, run rule victory over Wisconsin on Friday night.

“They did a really nice job of jumping on her early and forcing them to go to the bullpen in that first inning,” head coach Marla Looper said. “They continued to attack and that’s what I really liked the best.

“You can’t afford not to continue to press along, because you never know what the opponent is going to do. We just started to get outs instead of giving up runs. Our offense continued to fight and put up runs.”

The Hawkeyes improve to 13-30 overall and 4-8 in Big Ten Conference play following the win after five innings, while the Badgers drop to 16-21 on the season and 1-8 in conference action.

The Iowa offense got off to a hot start in the series, sending 16 hitters to the plate and scoring 10 runs in the top of the first inning. Claire Fritsch led it off with a single up the middle, and moved into scoring position on a groundout. Five straight hits — a Megan Blank double, Holly Hoffman single, Whitney Repole single, Kaitlyn Mullarkey single, and Erin Erickson double — followed for Iowa to produce the first four runs.

Sarah Kurtz drew a walk to load the bases in the next at bat, then three additional free passes — a Fritsch hit by pitch, Sammi Gyerman walk, and Blank walk — plated three more runs. Hoffman drove in the final three runs with a hard single to the fence in center to extend her team’s lead to 10-0 over the Badgers.

After starting pitcher Shayla Starkenburg and the defense retired Wisconsin in order in the bottom half — including two looking strikeouts, Iowa continued to produce at the plate in the second. Kurtz opened the frame with her second walk in as many at bats, moved to second on a groundout, and touched home on a Gyerman single through the right side to bring the Hawkeye lead to 11-0.

The Hawkeyes responded in the fourth, tacking on four runs to go up 15-3. Kurtz started it off once again, hitting a single to center. An error allowed Pratt to reach and Fritsch followed with a single to load the bases. Gyerman came through in the scoring opportunity, driving in a run with a single through the left side. The Hawkeyes took advantage of a passed ball and an error to clear the bases during the next at bat.

Blank followed with a single — reaching in her fifth consecutive at bat dating back to the Illinois series finale — before the Badgers could end the rally.

After holding the Badgers scoreless in the bottom of the fourth, the Hawkeyes added their 16th run in the top of the fifth. Mullarkey led off the inning with a hit by pitch, and Allie Wood followed with a pinch hit single. With teammates at first and second, Kurtz brought home a run with a fielder’s choice.

Iowa held Wisconsin to one run in the bottom half of the inning to trigger the run rule and secure its 16-4 final victory.

Blank paced the Iowa offense with a 3-for-3 performance at the plate, two RBIs, two runs scored, and a walk. Three others posted multiple hit games including Fritsch (2-for-3), Gyerman (2-for-3), and Hoffman (2-for-4). Driving in multiple runs were Gyerman (3), Blank (2), and Hoffman (3).

Starkenburg (11-17) was credited with the complete game win. She struck out four — three looking — and held the Badgers to five hits.

“I don’t know that Shayla really had her best stuff, but she did a nice job,” Looper said. “We have to work on the walks, but she let our defense play and took care of business. She went hard on the mound and gave us what she had tonight.”

Iowa and Wisconsin meet for game two on Saturday, April 11. First pitch is set for 12 p.m. (CT), and the game will be shown live on BTN Plus.

“We can’t rest on tonight,” Looper said. “We have to be ready to go tomorrow. It’s going to be a different day and any team can show up.”