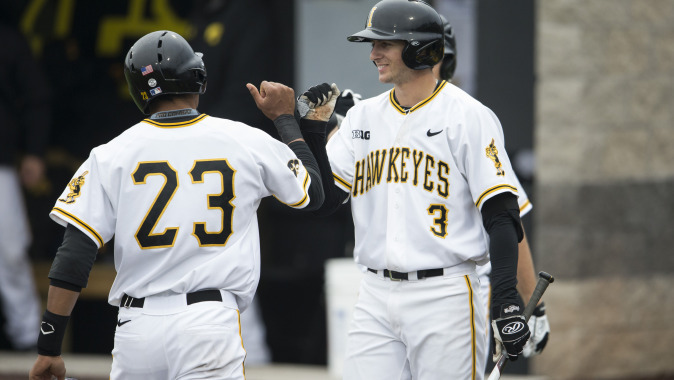 That’s the 15th-ranked and Big Ten-leading Hawkeyes’ mindset heading into their three-game weekend series at 16th-ranked Maryland from April 10-12 at Bob “Turtle” Smith Stadium. The Terrapins are 23-8 overall and tied for third in the Big Ten at 7-2.

The Hawkeyes have been believing — and producing — during the first two weekends of conference action, posting back-to-back sweeps over No. 17 Indiana and at Purdue to push its record to 6-0 in league play for the first time in school history. It resulted in Iowa moving to No. 15 in the Collegiate Baseball national rankings.

Iowa’s first trip to Maryland in its 124-year history will be a tall task. The Terrapins are 11-1 at home this season, including Big Ten sweeps over Minnesota and No. 17 Nebraska. Maryland advanced to the Super Regionals last season, and was a win away from the College World Series in Omaha.

The Terrapins have the Big Ten’s top starting pitcher in Mike Shawaryn (7-0, 2.00 ERA) — Iowa’s Friday night foe — and one of the conference’s top offenses. Maryland is third in the league with a .289 batting average with a conference-best 31 home runs and 145 RBIs. It averages 7.4 runs per game.

“It’s going to be tough,” said senior Jake Mangler. “They have a good weekend staff, good guys in the bullpen, and swing it well. We need to come out with the same energy and focus we have been on the weekends — do the little things: pitch well, execute, and play good defense. That will be the most important thing.”

UI head coach Rick Heller will lean on upperclassmen to keep the team focused. He continues to stress the pitch-to-pitch, inning-to-inning, day-to-day approach.

“Our message will never change, it’s the same every day we go out there,” said Heller. “Whether they believe the message is the key.

“With the older guys we have, they’re looking forward to the challenge. I expect them to go out, give their best effort, and control what they can control. It will be a good test to see if we can do that.”

The Hawkeyes have played into a good position in the Big Ten standings with the 6-0 start, but it’s a matter of building and pushing forward.

“If we play like we have been on the weekends, we’ll have a chance in all three games,” said Heller. “If we don’t, it will go the other way. I am looking at it as a big challenge and something we’re all looking forward to. Hopefully we’ll find a way to win some games at Maryland and then we’ll finally be able to be home for 10 of our next 11 games.”

Friday’s game is set for a 5:30 p.m. (CT) start followed by a 1 p.m. and 11 a.m. first pitch Saturday and Sunday. The final two games will be streamed live on BTN Plus on BTN2Go, while Friday and Saturday’s games will be on 800-AM KXIC and 1360-AM KMJM. All three games will be on Hawkeye All-Access.