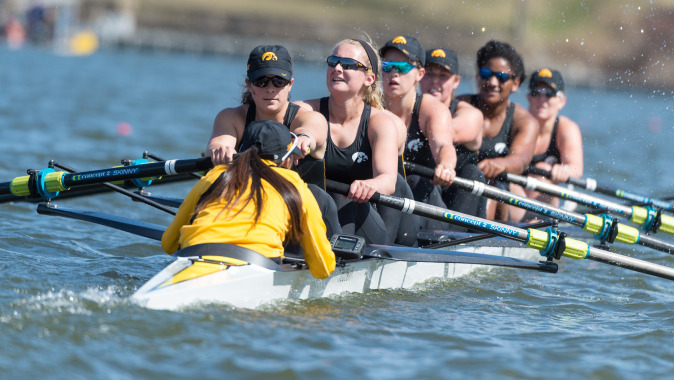 IOWA CITY, Iowa — The University of Iowa women’s rowing team put on a dominant performance Saturday at the Big Ten Double Dual in Ann Arbor, Michigan, earning four victories against Michigan State, one win over No. 15 Indiana, and two over No. 7 Michigan.

The Hawkeyes raced with fair conditions on Belleville Lake throughout the day, with sunshine and 10-15 mile per hour tailwinds over most of the course.

“I think that our crews raced as effectively against Big Ten competition as they have in recent memory,” said head coach Andrew Carter. “I think they performed as well as any crew has in the last several years.”

Iowa opened the morning session against Michigan State in the 2N8+ race. The Hawkeyes battled closely with the Spartans and finished a short seven seconds behind the opposing crew with a time of 7:31.22.

Iowa looked to even the score in the 1N8+ race, where they faced off with Michigan State once again. The Hawkeyes’ strong effort pushed them to a 7:07.45 finish behind the Spartans (6:54.30).

Iowa met Michigan State on the water once more for the 1V4+ race, where the Hawkeyes sent out an extra boat for the contest. The difficulty of the race was heightened due to the strength of Michigan State’s 1V4+ boat, which had the strongest performance at last year’s Big Ten Championship. However, the third time proved to be the charm for the Hawkeyes with both the 1V4+ and 2V4+ boats finishing 15 seconds and 11.47 seconds ahead of Michigan State’s crew (7:54.42), respectively.

The Hawkeyes continued the momentum into the 2V8+ race, where Alyssa Armstrong, Rebecca Thompson, Gabby Watson, Kat Tillman, Kaelyn Heiberg, Gemma Kerr, Claire Benschoter, Maddie Anglin, and coxswain Destinee Gwee pushed through a close race for a first place finish and a time of 6:44.8 against the Spartans (6:49.23).

Following an hour and a half break, Iowa returned to the water to begin the challenging afternoon slate against seventh-ranked Michigan in the 2N8+ race. In the first race, Hawkeyes battled it out on the water to finish a short 10 seconds behind last year’s Big Ten Championship runner-up, with a time of 7:26.4.

The Hawkeyes closed the gap against No. 7 Michigan in the 1N8+, crossing the finish line with a time of 6:56.9, a full six seconds ahead of the impressive Big Ten opponent.

No. 15-ranked Indiana joined Iowa and Michigan on the water for the 2V4+ race. In the closest contest of the day, Iowa’s boat came from behind to edge both of the top ranked crews, crossing the finish line at 7:22.9; just three seconds ahead of Michigan and a full 50 seconds ahead of the Hoosiers. Iowa’s boat posted the fastest V4+ time of the day.

The 1V8+ battled to close the gap against a strong Michigan crew and crossed the finish line at 6:35.60, less than six seconds out of first place. Both of Iowa’s varsity eight crews started the race ahead of Michigan and held the lead until the last 250 meters of the course, where Michigan made up ground for the win.

“Iowa was all over Michigan for the vast majority of the course,” said Carter. “I think they are on the right track. There are a lot of positives to take away from the day. We looked critically at how they raced and found some areas where they can improve, so we will focus on that as we go into a bye week.”

The Hawkeyes travel to Kansas City, Kansas, next for the B1G/Big12 Challenge on April 25-26. Iowa will take on Kansas and Oklahoma in a full weekend of racing.