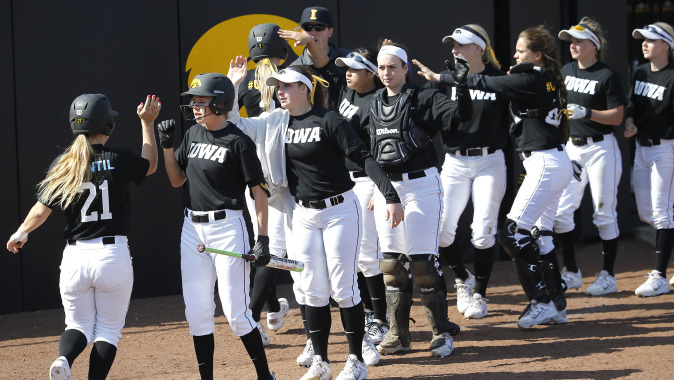 PROMOTIONS
? Blackout – Wear your black Hawkeye gear to the game.
? Student Night – Hawks Nest Tailgate before the game. Free pizza and drinks with lawn games for Iowa students. Students will have the chance to win a $50 VISA gift card.
? Hospitality Day.
? Tax Day – Two for one admission prices.
? The first 250 fans at the game will receive free eye black.

FOLLOW ALONG
The annual Iowa Cy-Hawk Series matchup against Iowa State will be shown live online on BTN Plus available at btn2go.com. Live audio of the game is also available on Hawkeye All-Access with Rob Brooks on the call. Links to audio and Gametracker (live stats) are available on the softball schedule page of hawkeyesports.com.

IOWA CORN CY-HAWK SERIES RUNDOWN
? Iowa trails Iowa State in the annual Iowa Corn Cy-Hawk Series, 13-11, before Wednesday’s softball game.
? With a win over the Cyclones at Pearl Field, Iowa can tie the series, 13-13, after initially falling behind 11-0 in the fall.
Each institution has claimed the series on five occasions since its inception in 2004.
? The Hawkeyes have clinched victories in wrestling, women’s basketball, women’s swimming and diving, women’s tennis, and women’s gymnastics. Iowa has also clinched the academic point.
? Iowa holds a 32-28-2 advantage in the all-time softball series, with the last contest ending in a 6-6 tie.

LOOKING BACK: AN UNCONVENTIONAL CONTEST
The Hawkeyes and Cyclones played to an unconventional result in the series in 2014. The teams played through rain, endured a significant weather delay, and saw the game end in a 6-6 tie after five innings due to darkness in Ames, Iowa. The Hawkeyes hit a season-high four home runs in the abbreviated contest. Both teams posted the same amount of runs (6), hits (7), and errors (1).

B1G SERIES VICTORY
The Hawkeyes clinched their first Big Ten series win, 2-1, over Wisconsin on April 10-12. Iowa took the first game of the series in run-rule fashion. The Hawkeyes used a 10-run first inning to jump ahead and eventually secure a 16-4 victory in five innings. After falling 5-4 in game two, the Hawkeyes outlasted the Badgers, 3-2, in 10 innings in game three. Senior Megan Blank hit the go-ahead home run in the top of the 10th to clinch the series victory.

BLANK DELIVERS
Megan Blank’s 25th career home run was one to remember. The senior recorded the go-ahead blast in the top of the 10th inning at Wisconsin on April 12 to secure the conference series victory. Blank currently leads the team with seven home runs this season, and is fourth all-time in career home runs.

STARKENBURG COMES UP B1G
Shayla Starkenburg threw a career-high 10 innings and fanned a career-high 11 batters in Iowa’s 10-inning win over the Badgers on April 12. The redshirt sophomore gave up three earned runs on 13 hits and two walks. The Ankeny, Iowa, native leads the Hawkeyes in wins (12), ERA (5.07), appearances (37), starts (27), complete games (21), shutouts (3), and strikeouts (148) this season.

FREE BASES
Sarah Kurtz tallied six walks in three games against Wisconsin on April 10-12. The freshman recorded a .727 on base percentage over the three game series, and reached base successfully at least two times in all three contests.

HOFFMAN PLATES 5
Holly Hoffman plated five runs in a three games against Wisconsin on April 10-12. The redshirt junior recorded a .462 clip with six hits in 13 at bats. Senior Megan Blank (32), redshirt sophomore Sammi Gyerman (31), and Hoffman (23) lead the Hawkeyes in RBIs this season.

CONFERENCE AVERAGE
Five Hawkeyes are hitting .300+ in conference play. Senior Megan Blank leads the team with a .452 clip, while redshirt sophomore Sammi Gyerman (.438) and freshman Angela Schmiederer (.400) join her in the 400s. Redshirt junior Holly Hoffman (.372) and freshman Allie Wood (.308) have each recorded .300+ clips in 14 conference contests this season.

TOUGH OUT
Senior Megan Blank has just eight strikeouts in 134 at bats this season. Blank currently leads the team in batting average (.433), slugging percentage (.716), and on base percentage (.503).

BLANK IN THE B1G
Megan Blank is currently ranked among the top five in the conference in four different categories. The senior ranks second in the Big Ten hits (58), is third in doubles (13), ranks third in batting average (.433), and is fourth in total bases (96).

DOUBLE TROUBLE
The Hawkeyes are tied for third in the Big Ten in doubles. Iowa has recorded 67 doubles on the season. Senior Megan Blank, the career doubles school record holder, leads the team with 13, while redshirt sophomore Sammi Gyerman has 10.

B1G HITS
Iowa is ranked ninth in the Big Ten in hits. Iowa has accumulated 324 hits in 45 contests this season. Senior Megan Blank leads the team with 58 hits, while redshirt sophomore Sammi Gyerman has 51.