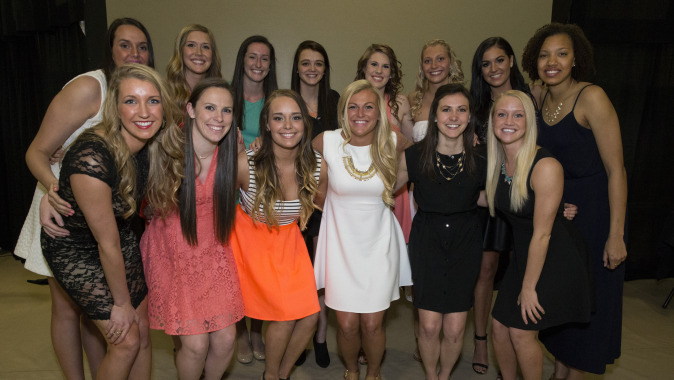 IOWA CITY, Iowa — The University of Iowa women’s basketball program gathered on April 10 to celebrate its accomplishments at the annual team banquet.

The Hawkeyes, who clinched their first Sweet 16 berth in 19 years and advanced to the NCAA Tournament for the eighth consecutive season, hosted the banquet in a place where they built their foundation for success — the Practice Facility inside Carver-Hawkeye Arena.

“It was nice to be able to celebrate one last time with this group because it has been such a special year,” head coach Lisa Bluder said. “It was ironic that we moved it to the Practice Facility, where we spent so much time during the year. To be able to wrap up the entire season there was neat.”

It was also the highest attended banquet in the 15th-year head coach’s tenure. Traditionally, the banquet draws in the 200 range, but this year 334 came together to celebrate with the Hawkeyes.

“So many people came out to support this group,” Bluder said. “This was the most attended banquet we’ve ever had. That was influenced not only by the success of the team, but also by the personalities of our players. Everyone had time to interact after the banquet and fans had the ability to get to know our players even better.

“Our fan support has been terrific all year, and it was nice for our players to experience that.”

The No. 14-ranked Hawkeyes ended the season with a 26-8 record overall, including a school record 18-0 mark on Mediacom Court in Carver-Hawkeye Arena. Iowa was one of 10 teams nationally to appear in the last eight NCAA Tournaments, and advanced to its first Sweet 16 since 1996.

Iowa set a school record in scoring offense for a second consecutive season, averaging 79.5 points per game. The senior class of Dixon, Doolittle, Logic, and Reynolds became the program’s winningest graduating class in 21 years, and the team’s starting senior trio of Dixon, Doolittle, and Logic are the second group of three players from the same class to eclipse the 1,300 career points mark in Big Ten history.

Four players — Logic, Dixon, Doolittle, and sophomore Ally Disterhoft — were awarded All-Big Ten honors following the season. Iowa’s four selections are the most for the program since 2009. In each of the last five years, the Hawkeyes have had three All-Big Ten honorees.

Reynolds, who is amidst her first year of law school, was named the 2015 recipient of the WBCA Charles T. Stoner Law Scholarship Award, while Logic, Iowa’s career leader in assists, was honored with the 2014-15 Senior CLASS Award.

Iowa is looking to add to its exceptional season Thursday evening at the 2015 WNBA Draft. Logic is one of 12 players invited to attend the draft in person, and will learn her fate live on ESPN2.