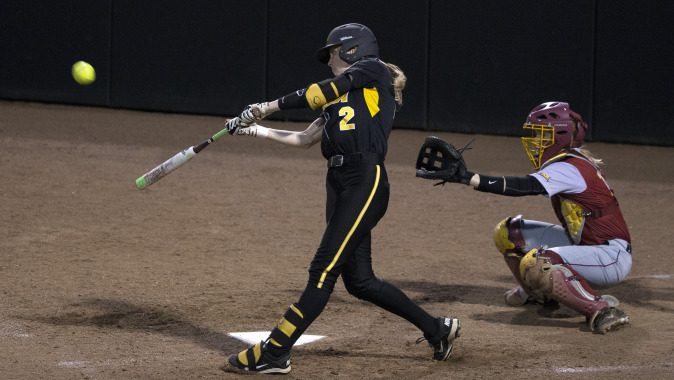 WEST LAFAYETTE, Ind. — The University of Iowa softball team split a pair of games against Purdue on Saturday afternoon. The Hawkeyes fell to the Boilermakers, 4-1, in game one before taking game two, 5-1. The Hawkeyes claim their second consecutive Big Ten series title, 2-1, after posting a 2-0 win on Friday.

Iowa moves to 16-33 overall and 7-10 in conference action following Saturday’s doubleheader. Purdue is now 27-18 on the season and 6-9 in Big Ten play.

“It was nice to see the team come out and bounce back after the first game today,” said head coach Marla Looper. “Unfortunately, we didn’t get the win in game one, but we came back and took care of business in game two to take the series.”

The Boilermakers threatened early in game two, putting a runner on second with a one-out double to right center. The Hawkeyes battled back, recording their conference-leading 26th double play of the season when redshirt sophomore Sammi Gyerman gloved a fly ball to center and gunned down the runner advancing to third to end the inning.

Sophomore Kaitlyn Mullarkey put the Hawkeyes on the board in the second. The Park Ridge, Illinois, native sent her fourth home run of the season and fifth of her career to right to give the Hawkeyes a 1-0 lead.

Purdue tied it up in the bottom of the second. The Boilermakers used a hit by pitch, walk, and an RBI groundout to knot the game, 1-1.

The Hawkeyes pulled ahead and never looked back in the third. Freshman Cheyenne Pratt led off the inning with an infield single. After a fielder’s choice, Gyerman drew a walk to extend her reached base streak to 14 games. Senior Megan Blank and redshirt junior Holly Hoffman followed suite, taking back-to-back walks to drive in a run. One batter later, Gyerman slide into home on a wild pitch to give the Hawkeyes a 3-1 lead.

Iowa plated another run in the top of the fourth. Pratt led off the inning with her second consecutive single. Sophomore Claire Fritsch followed with a walk before Gyerman advanced both runners and reached first safely on a fielder’s choice. Blank capitalized on the RBI opportunity with a grounder to third to extend Iowa’s lead to 4-1.

The Iowa bats tacked on another run in the fifth. Mullarkey reached on a hit by pitch to start the frame. Freshman Allie Wood plated her teammate with an RBI double to center to give the Hawkeyes a four-run lead.

Shayla Starkenburg (14-18) registered the complete game win in the circle. The redshirt sophomore allowed one earned run on five hits while striking out five and walking one. The Ankeny, Iowa, native notched two complete-game wins in the circle over the weekend series. She allowed one just earned run (0.50 ERA) and gave up one extra base hit in a combined 14 innings of work.

“Shayla did a really nice job in the circle today,” said Looper. “She struggled with her control a little bit in the first inning, but our defense helped her out with the double play. She made them hit pitches that she wanted them to hit and she didn’t leave anything elevated. I was proud of how she continued to grow as the game went on.”

Pratt and Blank paced the Hawkeyes at the plate with multiple hit performances. Blank went 2-for-3 with two doubles to add on to her career doubles school record (58 doubles). The senior has now recorded a hit and reached base in 11-straight games. Pratt notched her seventh multi-hit game of the season with a 2-for-3 effort at the dish.

The Hawkeyes struck first in game one, plating a run in the top of the second. Wood sent the first pitch she saw over the wall in right center — her fifth career blast — to give Iowa a 1-0 advantage.

The Boilermakers evened the score in the bottom of the second. After two quick outs, Purdue strung together a single and a double to tie the game, 2-2.

Iowa put two runners on in the sixth and the seventh but could not record a timely hit. The Hawkeyes left seven runners on base in the contest.

Iowa returns to action Wednesday when it faces the Missouri Tigers in Columbia, Missouri.