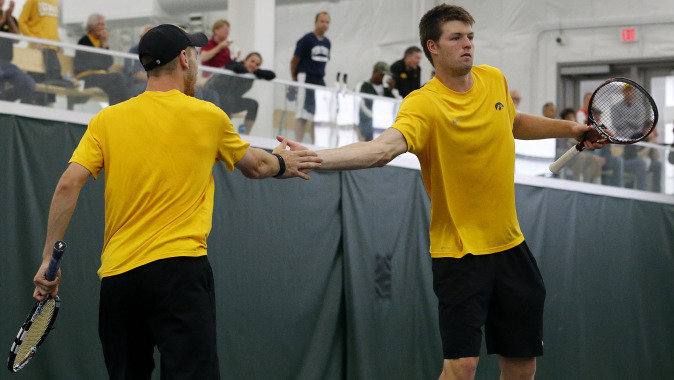 URBANA, Illinois— A day after reaching one of their team goals of getting to the Big Ten Tournament quarterfinals the University of Iowa men’s tennis team were bounced out of the tournament by top-seeded Illinois, 4-0, Friday at the Kahn Outdoor Tennis Complex.

“We competed well today against Illinois; they got on us early in singles but we hung around in most of the second sets,” said UI head coach Ross Wilson.

The Hawkeyes knew they were in for a battle with the fourth-ranked team in the country, facing ranked opponents in six of the nine matches at doubles and singles. Dominic Patrick and Josh Silverstein put their 7-2 record on the line against Farris Gosea and Aleks Vukic. Gosea/Vukic were able to see off the Iowa second position players, 8-2. Illinois captured the doubles point at the No. 3 position where Andres Estenssoro and Jake Jacoby were defeated by Ross Guignon and Aron Hiltzik, 8-4.

At No. 1 doubles, Matt Hagan and Lefteris Theodorou battled No. 68 Tim Kopinski and Jared Hiltzik. The Illinois duo led 6-4 before the match was abandoned due to Illinois winning the doubles point.

“I can’t thank Andres and Matt enough for all they have done to help get this program moving in the right direction again,” said Wilson.

With his team trailing 1-0 Patrick looked to even the score at No. 3 singles where he faced Kopinski, ranked 55th nationally. Kopinski took an early advantage registering a 6-0 first set win. He then earned a 6-4 win in a close second set, giving Illinois a 2-0 lead over Iowa.

Jacoby battled No. 66 Vukic at the No. 5 position. The freshman could not get the Hawkeyes back in the match falling in straight sets, 6-0, 6-3. Theodorou tackled a stiff test at the No. 2 spot in the Fighting Illini’s 45th-ranked Gosea. Theodorou kept it close in the first set but eventually fell 6-4. The freshman was then beaten 6-1 in the second set. As a result of the win at No. 2 position Illinois clinched the match 4-0, ending the season for Iowa.

Hagan battled 24th-ranked Jared Hiltzik at the No. 1 position in the last match of his Hawkeye career. Hiltzik cruised to a 6-1 win in the first set before Hagan evened the match in the second set with a 6-3 triumph. With Hagan leading 2-0, the match was abandoned in the third set due to Illinois clinching the match.

“It was nice to see Matt up 2-0 in the third set against one of the best players in the country,” added Wilson.

Silverstein’s match against No. 63 Aron Hiltzik and Nils Hallestrand’s match at the No. 6 position were both abandoned due to Illinois winning the match.

The Hawkeyes’ season ended Friday but they are proud of what they accomplished. The team posted a 14-11 overall record and 4-7 in the Big Ten. Iowa’s four conference wins are the most since 2010. Hagan was also named to the All-Big Ten first team, Iowa’s 18th honoree on the league’s first team and first since Christian Bierich in 2009.