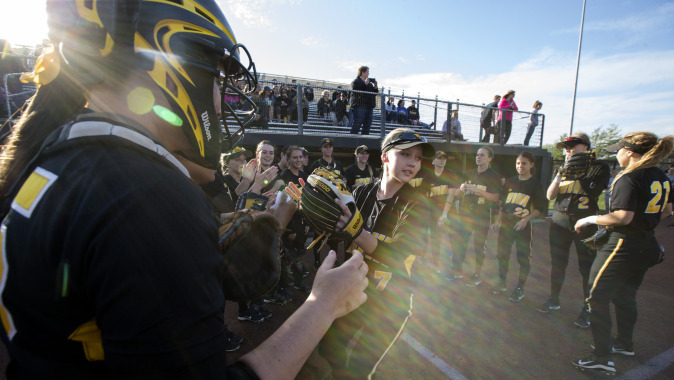 IOWA CITY, Iowa — After playing eight games against ranked opponents — seven of which were ranked in the top six in national polls — in the first seven weeks of the season, the University of Iowa softball team has seen success in the Big Ten Conference season.

The Hawkeyes have compiled a 7-10 record since the start of the conference slate, boasting wins over No. 4 Michigan, Maryland, and Illinois, and back-to-back series victories over Wisconsin and Purdue in the last two weeks.

With three Hawkeyes hitting over .300 in conference play, including senior Megan Blank (.460), redshirt sophomore Sammi Gyerman (.386), and redshirt junior Holly Hoffman (.314), and nine with on-base percentages of .300 or higher, the team is hitting its stride.

“The extra innings win at Wisconsin was a turning point for us,” junior Whitney Repole said. “It was the clutch moment for the team. As far as pitching goes, we knew we could hold them out. From there we’ve been giving up fewer hits and have been more consistent scoring runs when we need to.”

The runs have been coming in with an increase in power. Heading into its Big Ten series at Minnesota, Iowa has hit a home run in each of its last four games, three coming against conference opponents.

“More of the clutch hits have been coming, and seeing that gives everyone else confidence, the ability to relax, and not press too much at the plate,” Blank said. “I think the production has helped.”

Blank has been a spark plug at the plate raising her batting average to .450 on the season with a blistering .460 in the team’s 17 Big Ten competitions. She also leads the way with five doubles, two triples, five home runs, and 17 RBIs in conference action.

“Taking it one at bat at a time, moving base to base, and not trying to do too much has helped,” Blank said.

Gyerman, who is also amidst a successful conference stretch with a .386 batting average and 16 RBIs, echoes her sentiments.

“It’s nice to be able to accomplish things we’ve worked hard for.”

The Hawkeyes continue Big Ten action on the road with a three-game series at No. 12 Minnesota on April 24-26, before closing out the regular season with a home series against Northwestern on May 1-3.

Iowa, ranked ninth in the Big Ten standings heading into the series with the Gophers, is looking to clinch one of 12 spots in the Big Ten Tournament held at Ohio State from May 7-9.