Iowa Drops Twinbill to No. 12 Minnesota 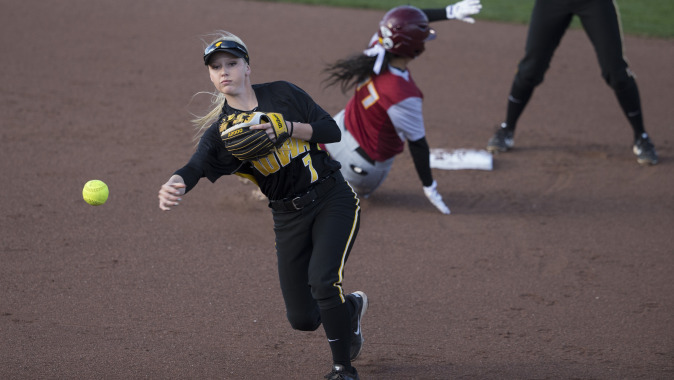 MINNEAPOLIS, Minn. — The University of Iowa softball team dropped a twinbill to No. 12 Minnesota on Saturday afternoon. The Gophers secured back-to-back, 8-0, run-rule wins on walk-off hits.

“Offensively, we need to make adjustments sooner,” head coach Marla Looper said. “We did a better job in game two, but we didn’t stay on their second kid.”

The Gophers got the bats going early in game one, plating two runs in the bottom of the first. After a leadoff walk, Minnesota registered back-to-back singles to load the bases. The Gophers plated their first run on a 6-4-3 double play – Iowa’s 28th double play of the season — before an RBI double to left gave Minnesota an early 2-0 lead.

Minnesota plated four more runs in the bottom of the second. The Gophers used a walk, hit by pitch, double, and a two-run home run to center by pitcher Sara Groenewegen to extend their lead to 6-0.

Iowa recorded its first and only hit of the contest in the third inning. Sammi Gyerman legged out an infield single to reach base for the 16th-straight game.

The Iowa defense held the Gophers scoreless in the bottom of the third. After a leadoff walk, senior Megan Blank made a diving stop and threw to sophomore Claire Fritsch for the first out of the inning. The Hawkeyes turned their second double play of the game (4-6-3) and conference-leading 29th of the season to end the inning. Iowa has now turned two double plays in a game seven times this season.

The Gophers plated their final two runs in the bottom of the fifth. Minnesota used two walks and three singles to notch the 8-0 walk-off victory.

Shayla Starkenburg took the loss in the circle. The redshirt sophomore allowed eight earned runs on nine hits and seven walks in her four innings of work. Gopher starting pitcher Groenewegen registered her 24th win of the season. The sophomore did not surrender a run and held the Hawkeye offense to one hit in five innings.

The Hawkeyes put two runners in scoring position to start the second game, but could not produce a run. Gyerman took a pitch to the wrist to reach base for the 17th consecutive game. Blank followed with a double to left – the 59th double of her career – to put runners on second and third before a line out and a strikeout ended the Iowa scoring chance.

The Gophers found the scoreboard in the bottom of the second. Minnesota first baseman Kaitlyn Richardson led off the inning with a solo home run to center to give the Gophers and early 1-0 lead.

Iowa put the first two runners on in the third. Junior Erin Erickson sent a leadoff single up the middle and moved to second on a wild pitch before Fritsch reached first on a hit by pitch. With two runners on and nobody out, the Gophers elected to make a pitching change. The move paid off as Minnesota retired the next three batters to keep the Hawkeyes off the board.

After trading zeros in the third, the Gophers plated two more in the fourth. Minnesota used a hit by pitch, single, and a bases-clearing double to take a 3-0 lead.

The Gophers secured their second walk-off victory of the day in the bottom of the fifth. Minnesota plated five runs on a two-run home run to right center and a three-run shot to left center to earn the 8-0 victory.

Ashley Yoways (2-15) took the loss in the circle. The freshman allowed eight earned runs on nine hits. She walked three and struck out two.

“Defensively, we played solid,” said Looper. “We had a couple of double plays in game one and made some plays in the second game. When we had the ball in the infield we took care of it. Unfortunately we had too many free passes, and the long balls which spoiled it all.”