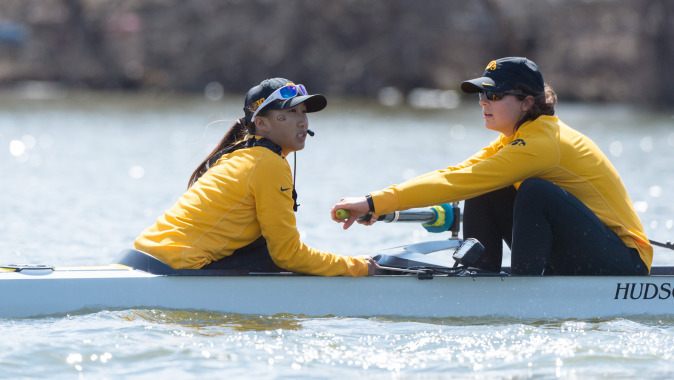 IOWA CITY, Iowa — The University of Iowa women’s rowing team put together a solid day of racing against host Kansas, defending Big 12 Champion Oklahoma, and No. 8-ranked Wisconsin at the Big Ten/Big 12 Challenge in Kansas City, Kansas, on Saturday. The Hawkeyes earned 10 victories against Kansas and six wins over Oklahoma.

“I think we need to find a little more speed to be competitive at the top of the Big Ten, but I think we are taking steps in the right direction.” said head coach Andrew Carter.

The Hawkeyes raced with excellent conditions on Wyandotte County Lake throughout the day, with light drizzle and calm water in the morning and a light tailwind in the afternoon. Predictions warned of severe weather for the afternoon duals so a compressed, modified program was used that had all four teams contesting each boat class together.

With Kansas not fielding a crew in the 2N8+ event, Iowa’s crew opened the race day in a three-crew competition with Oklahoma and B1G rival Wisconsin. The young crew gave up some water early to the Badgers, but won a hard-fought battle with the Sooners to finish second.

The Hawkeyes went on to face the Jayhawks in head-to-head competition for the remainder of the morning session.

The 1N8+ saw the Hawkeyes get out to an early edge over host Kansas in the first 500-meters of the race, but coxswain Emma Hindes rallied her crew in the second half to establish a distinct lead. The Hawkeyes continued to stretch over the rest of the course to finish with a comfortable 16-second margin over the Jayhawks.

The 2V4+ event was also a three-crew affair, this time with both the 2V and 3V fours from Iowa taking on the 2V4+ crew from Kansas. In one of the closest races of the day, the Hawkeyes 2V4+ pulled out an impressive one-second victory over Kansas, with the 3V crew showing competitively in the event.

Iowa’s 1V4+ was next on the water to contest the first of the NCAA Championship boat classes. Sarah Powell, Victoria Bricker, Bec Clayton, Kasia Gniatczyk, and coxswain Ellen Cranberg got out early and continued to pad their lead over the entire 2000-meter course. The all-sophomore crew crossed the line with well-earned, 20-second victory over the Kansas crew, crossing the finish line with a time of 7:31.9.

The Hawkeyes continued their momentum into the 2V8+ race, where an early lead was not enough for the Hawkeyes. A tidy start gave Iowa a full boat length lead by 40 strokes. Coxswain, Destinee Gwee prodded her crew for more and a disciplined focus on the plan allowed the Hawkeyes to cruise to a win by more than 15 seconds.

Iowa finished up the morning session with the 1V8+ race against Kansas. Again a good start allowed the Hawkeyes to gain an early advantage. The Jayhawks did not yield as easily this time, mounting several clear attacks throughout the course. Iowa maintained composure at each attempt and held the Jayhawks back.

Nina Hendriks, Zoe Ribar, Morgan Grastorf, Lauren Subler, Jessica Streur, Cristy Hartman, Hannah Hawks, and Beth Baustian kept focused on the calls from coxswain, Katie Brown, and countered each move the Kansas crew made. At the finish, 8.8 seconds separated the two crews with the Hawkeyes once again topping their Big 12 opponent to bring the Iowa’s morning session record to a perfect 5-0 against Kansas.

The afternoon schedule was altered due to severe weather threats. Instead of head to-head competition, all four teams were combined into seven events. Following a short break, Iowa returned to the water to begin the challenging afternoon slate against Kansas, Oklahoma, and Wisconsin.

An injury from the morning session forced last-minute lineups changes in the Hawkeye’s 2V8+ and 2V4+ crews and a scratch from the 3V4+ event.

“There is no doubt that it had an effect on the second half of racing,” said Carter. “I think they handled it as well as can be expected, but it is naturally going to upset the flow of how things have been working.” The 2N8+ and 1N8+ came up just short against high-quality crews from Wisconsin, finishing third and second, respectfully.

The new 2V4+ lineup, featuring the addition of Allison Hanson from the 3V4+ crew, battled to close the gap against a strong Wisconsin crew and crossed the finish line at 7:21.3, just five seconds off the lead.

The Hawkeyes’ 1V4+ crew had a similar contest against its Big Ten foe. The Black and Gold gave a fight that was needed against a Wisconsin crew that is ranked third in the country. In the end, the Badgers proved to be too much. Iowa crossed the line seven seconds after Wisconsin, but eight seconds before Oklahoma and nearly 19 seconds ahead of Kansas.

The 1V8+ got off the line with No. 8 Wisconsin, but the Badgers began their push before the 500-meter mark. The Hawkeyes battled to close the gap against a powerful and well-prepared Wisconsin crew, but each move from the Badgers yielded slightly more of a lead.

Oklahoma brought a much stronger performance to the afternoon round, however, their attacks did not have the same effect. The Hawkeyes were able to stretch out on the Sooners as the race progressed. At the line, Iowa crossed in 6:22.6, just over 10 seconds behind the Badgers, seven in front of defending Big 12 Champions Oklahoma and 11 ahead of a hard-charging crew from Kansas.

“Looking at how the races unfolded, I think we need to spend a little more time working on our sustainability at pace and push the boundaries of that pace,” said Carter. “I am happy with how the races have been unfolding. I would just like to see everything shift forward a little more.”

The Hawkeyes will travel to Oak Ridge, Tennessee, next to take on on Tennessee and Central Florida on May 2. Racing is set to begin at 8 a.m. (CT).