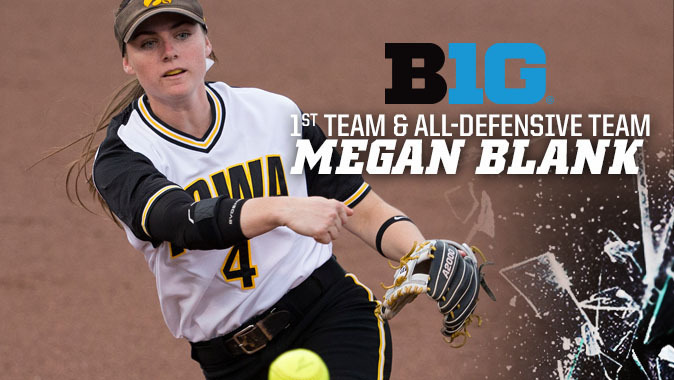 Blank, who has started all 210 games of her career at shortstop, has set two school records in her career and has the opportunity to accomplish more with Big Ten Tournament action remaining. She broke the 18-year-old career doubles record of 52 held by Knopf this season, hitting 17 as a freshman, 15 as a sophomore, 11 as a junior, and 17 as a senior to bring her career total to 60.

Blank has been an anchor in the field for the Hawkeyes all season, helping her team turn a conference-leading 33 double plays in 2015. She has been a part of 20 double plays, has only committed nine errors in 225 chances, and owns a .960 fielding percentage.

Junior Haley Hansel was also honored on Wednesday as the Big Ten Sportsmanship Award recipient. The Overland Park, Kansas, native earned Iowa softball’s Inaugural Hawkeye Service Award for her consistent presence volunteering in the community with Big Brothers Big Sisters earlier this season. She has appeared in 18 games for the Hawkeyes, 17 times as a pinch runner and once as a pinch hitter.

No. 10-seeded Iowa will face seventh-seeded Rutgers in the opening round of the Big Ten Tournament hosted by Ohio State in Columbus, Ohio. The game, which will be shown life on the Big Ten Network, is set to begin at 7 p.m. (CT) on Thursday, May 7.