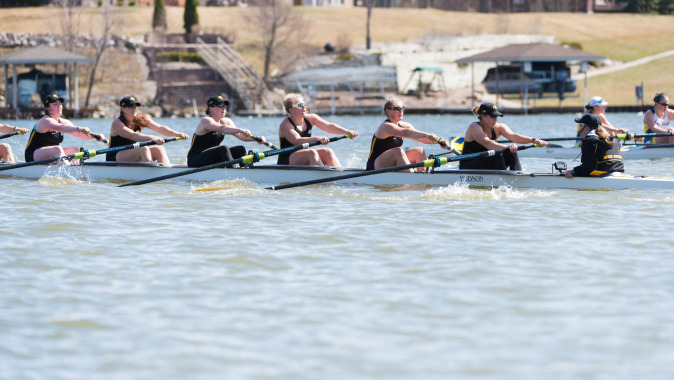 Iowa’s total marks the second highest scoring performance at the Big Ten Championships in program history, and the highest since 2003 when the Hawkeyes totaled 99 points to finish fourth.

“It was definitely another step forward for our program,” said head coach Andrew Carter. “As a group, we acknowledge that we came up short of promise in a couple of areas this weekend, but overall there is much to be proud of this year. Knowing how many women return in the fall, I know there will be even more to be proud of next year.”

The Hawkeyes opened the second day of championship racing with a sixth place finish in the 1V8+ race. The Hawkeyes battled it out with Ohio State, Michigan, Indiana, Wisconsin, and Minnesota, to cross the finish line with a time of 07:15.131 and collect 27 points.

Iowa’s 2V8+ had a dominating performance in the Petite Finals, beating Rutgers by 28.528 seconds.

Iowa’s 1V4+ boat got the V4+’s off to a strong start, finishing fourth place. The Hawkeyes battled it out between Wisconsin and were just a second off at the 500-meter, 1000-meter, and 1500-meter marks. Wisconsin managed to hold the one second lead until the end to edge the Hawkeyes. Just over five seconds separated the Hawkeyes from second-place Michigan (07:58.903).

The Hawkeyes closed the day with a sixth place finish in the 2N8+ finals, finishing a full 44 seconds ahead of the Golden Gophers crew.

“Our performance in the 4+’s was definitely a highlight today,” said Carter. “The 3V4+ came away with medals and our 1V and 2V crews were a fraction of a second out of the medals. Many of those women will be back in 2015-16 so we’re sure to see those names making an even bigger mark in the future.

“I think a few more points were in our grasp today, but we learned those lessons. This is the Big Ten Championships and you have to expect the best out of seven other rowing programs. That means there can be nothing, but your best brought to the race course. Our group is keen to do all necessary to ensure that’s the case next year.”