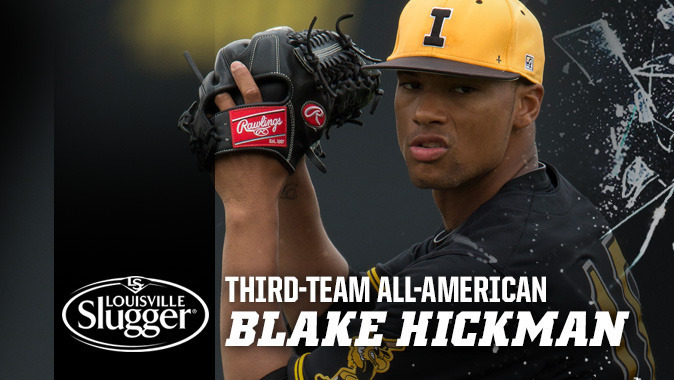 IOWA CITY, Iowa — University of Iowa junior Blake Hickman has been tabbed as a third-team All-American by Louisville Slugger, it was announced Thursday by Collegiate Baseball newspaper.

Hickman is Iowa’s first All-American since Brad Carlson in 1999 and the third Hawkeye pitcher to garner All-America recognition all-time. The Hawkeyes have had four freshmen All-Americans since 2000.

The Chicago native is 9-2 with a 3.18 ERA in 15 starts in his first season as a starting pitcher. Hickman won his first five Big Ten starts and finished 7-0 with a 2.45 ERA over 47 2/3 innings in league play to tie for the conference lead in wins. He was a first-team All-Big Ten selection.

Hickman has six quality starts this season and has pitched at least six innings in 8-of-15 starts. The Chicago native has a .214 batting average against to rank fifth in the Big Ten and his 80 2/3 innings pitched are tied for the 14th-most in the conference.

The right-hander had a no-hitter through six innings against Cincinnati on Feb. 28 and 6 2/3 innings at No. 16 Maryland on April 11. He was perfect through four innings in College Park.

Iowa will make its first NCAA Regional appearance since 1990, facing third-seeded Oregon at 1 p.m. (CT) Friday at Hammons Field in Springfield, Missouri. The game will be available on ESPN3.