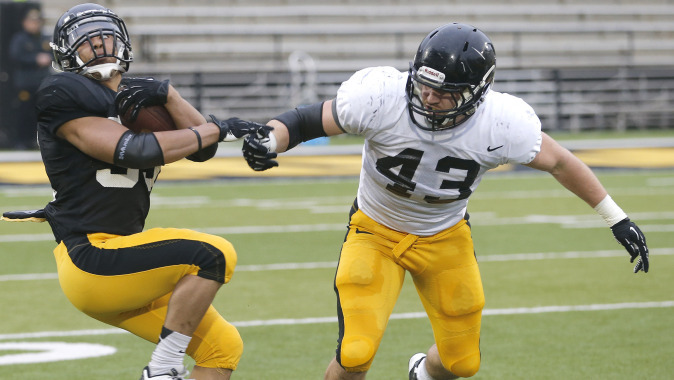 IOWA CITY, Iowa — If the early bird gets the worm, it stands to reason that early-rising Hawkeyes will be better prepared to get the win.

The University of Iowa football program will break from a long-standing routine of afternoon practice when camp opens in August. The decision to move to morning workouts is based on out-of-season research conducted by head coach Kirk Ferentz and his staff.

“From our standpoint we felt there were too many advantages not to go that route,” Ferentz said. “It is something I have been contemplating for a couple years. We feel we can be better prepared mentally for game days and there are physical advantages to it.”

Another reason is for the academic well-being of the Hawkeye student-athletes. By practicing in the morning, players have between 11 a.m. and 4 p.m. to schedule classes. It will also be easier for them to enroll in night courses, which Ferentz said have increased in number and popularity the past five years. In previous years, student-athletes might not leave the Hayden Fry Football Complex until 6 or 7 p.m.

What will be the biggest change?

Before, Iowa used Monday as an off day during the season. Under the new format, the off day will be Thursday. News conferences, typically held Tuesday, will remain that day, except the availability of Ferentz and select players will flip-flop. Student-athletes will be available to media immediately after practice, with Ferentz’s more formal news conference to follow.

“I’m excited because I am more of a morning guy,” UI senior offensive lineman Austin Blythe said. “I hate sitting around all day just to work out. It has benefits to it and coach has a good reason to move practice to the morning. We trust him, and we’ll go with it.”

Ferentz first caught wind of morning practices when he was head coach at Maine from 1990-92. At that time New Hampshire was working out at 5:30 a.m.

That is good news to UI senior defensive end Drew Ott, who even though he grew up on a farm, wasn’t always an early-riser. But to Ott, there is a huge difference between morning chores and morning football.

“Waking up early, the first thing you get to do is football. You will come here and be fresh,” Ott said. “Instead of going to classes in the morning and being groggy for practice in the afternoon, you get to do football first.”

“Every hour counts, so the more recovery time, the better,” he said.

It’s not that the Hawkeyes didn’t succeed when they practiced in the afternoon. In 15 seasons under Ferentz, Iowa has won 115 times and been to 12 postseason bowl games. But the new arrangement is expected to be even more beneficial.

“We will be able to get the game plan done at a little quicker pace. We have been doing that on the short week for three years, so it’s really not that big of deal,” Ferentz said. “Since we won’t be involved with players on Thursday, it gives everybody a chance to step back and methodically go through things at the end of the week and make better adjustments. It gives us a day to get everything exactly where we want it.”

Ferentz compared the new schedule to ones his staff used for three seasons preparing for the Hy-Vee Heroes Game against Nebraska. Those games are played on Friday after Thanksgiving, leaving teams with one less day of preparation than usual.

Ferentz plans to regroup the team and staff daily over an evening dinner where coaches and players will review film from morning practice.

“It is a more efficient use of the player’s time,” Ferentz said.