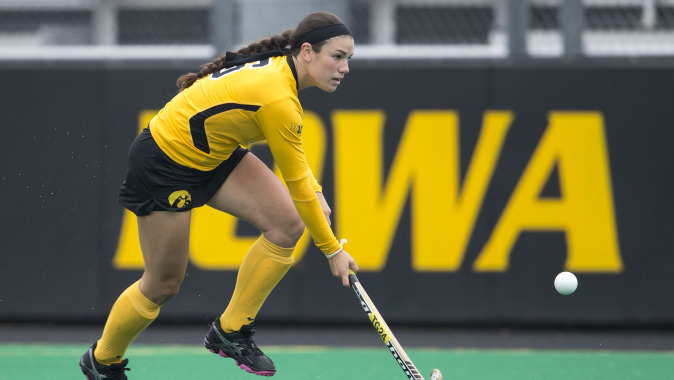 HARRISONBURG, Va. — A trio of Hawkeyes combined to score five goals, sending the University of Iowa field hockey team past Richmond in a neutral site contest on Friday at the James Madison University Field Hockey Complex. The Hawkeyes dropped the Spiders, 5-1, to improve to 2-1 overall.

“It was great to get the result today against a very solid Richmond team,” said UI head coach Lisa Cellucci. “We have to improve our individual and team defense in order to play a complete 70 minute game.”

The first of Iowa’s five goals came just 2 1/2 minutes in when junior Stephanie Norlander slapped a pass from sophomore Mallory Lefkowitz past Richmond goalkeeper Amanda Hoyt, giving the Hawkeyes an early 1-0 lead. Richmond came firing back, though, as Kelly Quinn scored to give the Spiders a goal of their own 1 1/2 minutes later.

It was all Iowa from then on out as junior goalkeeper Alexandra Pecora and the Hawkeye defense would lockdown, while the Hawkeye offensive attack reeled off four unanswered goals.

Twenty seconds after Richmond tied the game at one, freshman Makenna Grewe scored her second goal of the season to give the lead back to the Hawkeyes. Sophomore JoElla Guagliardo followed Grewe by scoring her first career goal in the 32nd-minute, giving Iowa a 3-1 lead heading into halftime.

Grewe scored her second goal of the night in the 43rd-minute. The San Diego, California, native powered in for the score after Lefkowitz found her waiting wide open in front of the net.

Iowa’s five-goal night was capped off by Norlander, who secured a baseline pass from junior Sophie Plasteras before flicking it in for her third goal in three games.

Iowa returns to the JMU Field Hockey Complex on Sunday for a nonconference showdown with James Madison at 11 a.m. (CT). The event will be streamed online at http://bit.ly/1NYBZD9. Live stats are also available on the field hockey schedule page on hawkeyesports.com.