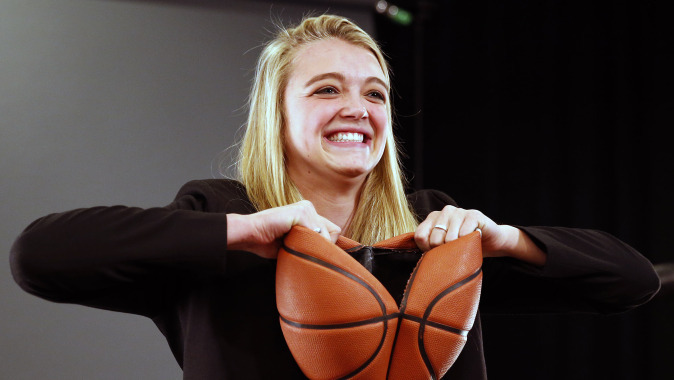 CHICAGO — On Feb. 24, 2015 — two days before the University of Iowa women’s basketball team defeated Wisconsin at home — a tendon in Ally Disterhoft‘s right wrist had enough.

From that point (and for the next seven games), Disterhoft played with pain and a heavily-taped, immobile thumb on her shooting hand.

“It was difficult, but mostly mental at first,” Disterhoft said Thursday at Big Ten Conference Women’s Basketball Media Day at Chicago Marriott O’Hare. “I wasn’t able to grip the ball the same, but our trainers did a great job taping it every day. I knew I wanted to finish the season with those seniors and go as far as we could in the (NCAA) tournament, so I wasn’t about to throw in the towel.”

The Hawkeyes (26-8 overall) won five of seven games during that final stretch and Disterhoft was leading scorer during a win against Nebraska (16 points) in the Big Ten Tournament and against American (18) in the first round of the NCAA Tournament.

Disterhoft finished her sophomore season of 2014-15 tied with Melissa Dixon as Iowa’s leading scorer with 503 points. She averaged 14.8 points and 5.9 rebounds in 34 games with 40 3-point field goals. Disterhoft attempted 175 free throws — 75 more than anyone else on the team.

“We completely tried to have everybody ignore that because it was awkward,” UI head coach Lisa Bluder said of Disterhoft’s injury. “She had no movement on the thumb of her right hand. That affects your shooting, passing, and ball handling. We thought the less our competitors knew about that, the better it would be for us.”

Disterhoft begins her junior season with 977 career points. She is team captain (along with senior Kali Peschel) and conference coaches selected her to the preseason All-Big Ten team.

“It is great recognition, but there is a lot of work to be done,” Disterhoft said. “Those awards matter a bit more toward the end of the season. I wouldn’t have been able to do a lot of those things without great teammates and that has always been a staple of our team: unselfish basketball, making each other better, and it’s a team game. That aspect is more important than individual awards.”

Disterhoft and the rest of the Hawkeyes lost four great seniors to graduation last season. Bluder and Disterhoft think the rest of the conference is unwisely overlooking what Iowa has to offer this season. Bluder says there are “hidden gems” on the roster, ready to sparkle; Disterhoft said the pieces are coming together and there are no excuses why the Hawkeyes can’t make a ninth consecutive appearance in the NCAA Tournament.

“We had people who didn’t get a lot of time last year who are ready to step up this year,” Disterhoft said. “They worked extremely hard in the summer and improved their games.”

Meanwhile, players like Disterhoft are stepping to plate while remembering what departed Hawkeyes Dixon, Bethany Doolittle, Samantha Logic, and Kathryn Reynolds conveyed to the program.

“That no-fear attitude, passion, and fire. That is what I took away from that group (of seniors),” Disterhoft said.

Now she is charged with passing that approach to a talented group of eight underclassmen. The Hawkeyes received a head start on team building during an 11-day summer trip to Italy.

“We have to introduce them to the culture and style of play we expect,” said Disterhoft, who has become a more vocal leader since Iowa’s Sweet 16 loss to Baylor on March 27.

“They are extremely talented and there is a lot of playing time up for grabs,” Disterhoft said. “That has motivated not only our freshmen, but girls who didn’t get as much playing time as they wanted the past couple years. That added opportunity has heightened the level of intensity in our practices.”

Disterhoft had surgery in the offseason and her right thumb feels great. She looks to increase her aggressiveness on both ends of the court and build on what she accomplished during her first two seasons as a Hawkeye — doing it all in an unselfish manner.

“We win games with five people in double figures and that is what we are aiming for again this year,” Disterhoft said.

Iowa opens the season Nov. 8 with an exhibition game against Upper Iowa at 2 p.m. (CT) on Mediacom Court inside Carver-Hawkeye Arena. The first regular season game is Nov. 13 at home against North Dakota.