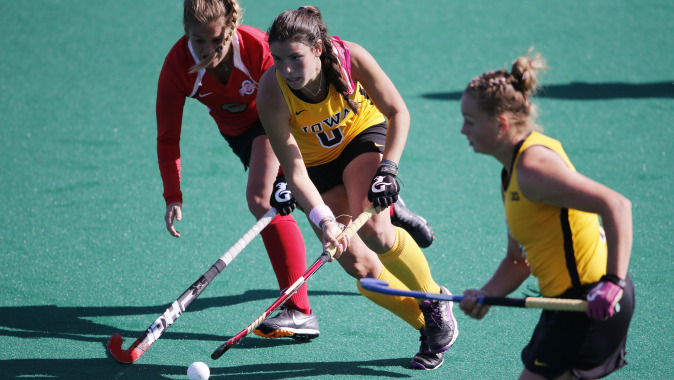 THIS WEEK
The University of Iowa field hockey team hits the road for the final time this season when it travels to Pennsylvania for a matchup with Penn State. The Hawkeyes face the Nittany Lions on Friday at 2:30 p.m. (CT) at the Penn State Field Hockey Complex.

WATCH LIVE
This Friday’s game at Penn State will be televised live on BTN with Dean Linke and Kara Lentz on the call.

FOLLOW ON THE WEB
Iowa field hockey fans can follow this Friday’s matchup via live stats (GameTracker) on hawkeyesports.com. Click on the “GT” link found on the field hockey schedule page to access the live stats feed.

PENN STATE VS. IOWA — THE SERIES
• Iowa is 25-21-1 all-time against Penn State. Iowa is 5-11 when playing in University Park, Pennsylvania.
• Since 2010, the Hawkeyes are 2-5 when facing the Nittany Lions. Iowa’s two wins came in each of the past two seasons. The Hawkeyes shutout the Nittany Lions, 4-0, at home in 2014, and notched a 4-3 overtime victory in the semifinals of the 2013 Big Ten Tournament.
• Twenty-two of the 47 games played between Iowa and Penn State have been decided by one goal. The Hawkeyes are 15-7 in those games.
• Nine games between Iowa and Penn State have gone into overtime, including four double-overtime games. The Hawkeyes hold a 8-1 advantage in overtime games.

BIG TEN IN THE RANKINGS
Three of nine Big Ten schools are ranked in the Penn Monto/National Field Hockey Coaches Association (NFHCA) Division I Poll, released on Oct. 20, including Maryland (No. 6), Michigan (No. 11), and Northwestern (No. 16).

TWO SCOOPS, PLEASE
Through 16 games this season, the Hawkeyes have had four play¬ers score two or more goals in a single game. Junior Stephanie Norlander leads the way with four, including her second career hat-trick against Saint Louis on Sept. 13. Junior Chandler Ackers and freshman Makenna Grewe have each notched a pair of two-goal games, followed by sophomore Veronique Declercq who has one. The four have combined to score 33 of Iowa’s 42 goals this year.

GREWE NAMED B1G FRESHMAN OF THE WEEK
Freshman Makenna Grewe was named Big Ten Conference Fresh¬man of the Week by the league office on Sept. 15. It was the first honor of Grewe’s career.

CALL IT A WIN STREAK
From Sept 12-20, the Hawkeyes won four games in a row, defeat¬ing the likes of Kent State, Saint Louis, Rutgers, and Missouri State. In those four games, Iowa recorded two shutouts and outscored its opponents, 20-4.

Juniors Chandler Ackers and Alexandra Pecora and sopho¬mores Melissa Progar and Taylor Omweg were each selected and competed in the USA Women’s National Championship at the USA Training Center in Lancaster, Pennsylvania. Ackers and Pecora were also selected and participated at the Junior National Team Camp and Trials held at the Spooky Nook Sports Complex also in Lancaster, Pennsylvania.

Sophomore Veronique Declercq competed for the Belgium U21 Team in various tournaments over the course of the sum¬mer.

WELCOME BACK, JESS
Head coach Lisa Cellucci announced the addition of former Hawkeye Jessica Barnett to her staff in late July. Iowa’s 2012 and 2013 female Athlete of the Year, Barnett will serve as a volunteer assistant coach. a four-year starter for the Hawkeyes from 2009- 12, Barnett was a two-time All-American and a three-time All- Big Ten, All-Region, and Big Ten All-Tournament team selection. She helped the Hawkeyes earn back-to-back NCAA tournament appearances in 2011-12.

LOOKING AHEAD
The Hawkeyes close out the regular season when they return to Iowa City on Oct. 31 for a Senior Day matchup against Maryland.