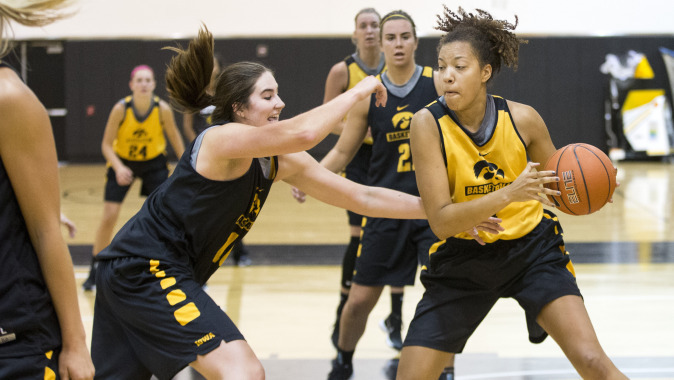 IOWA CITY, Iowa — There is two times the potential on the University of Iowa women’s basketball team when it comes to replacing three-year starter Bethany Doolittle.

Gustafson is a traditional post; she rebounds and excels on the block. Coley has speed, agility, and quickness to complement a face-up game.

“I like that we have two posts that bring different styles to the floor because that makes it harder to guard,” UI head coach Lisa Bluder said Thursday at the team’s media day in Carver-Hawkeye Arena.

“It makes it harder for the team to prepare for us because you’re going to have a fast, agile player like Chase that brings you away from the basket or somebody that’s physical and wants to be down on the block like Megan. That’s a nice asset to have both types.”

The versatility gives the Hawkeyes — ranked 23rd in the preseason Coaches’ Poll — options.

“(Their varying skill sets) will help us adapt to the team we’re facing,” said junior Ally Disterhoft. “We’ll be able to adjust a little better than we have in the past. That gives us more freedom with our offense and defense.”

Coley is a year more confident after playing 29 games as a reserve last season, averaging 6.9 minutes. She led the team with a 64.9 field goal percentage, making 37-of-57 attempts.

“I have to be a bigger presence in the post,” said Coley. “I have a lot more confidence and everybody (on our team) has improved so much in the offseason. I am excited, knowing what I am getting myself into.”

“Chase has grown,” said Disterhoft. “She utilized this summer to work on all areas of her game. That has been great to see because she has so much potential. Now it’s just going out and doing it.”

Gustafson is the new kid on the block with a sparkling high school resume. She finished her career with a Wisconsin high school state record 3,229 points and 1,724 rebounds. She scored 64 points in a game as a senior.

Last summer’s Game Time League provided Gustafson a glimpse of what it takes to compete at the collegiate level. She has displayed the work ethic and desire to learn and improve.

“I want to contribute as much as possible,” said Gustafson. “Coach Bluder says it doesn’t matter how young you are, if you work hard, you will play.”

“She gives it her all every day,” said Disterhoft. “She is diving for loose balls — you usually don’t see a 6-4 girl doing that — and she has impressed me with her work ethic.”

“We can do so many different things,” said Coley. “It is going to be hard for other teams to handle our different styles.”

The Hawkeyes host Upper Iowa in an exhibition Nov. 8, beginning at 2 p.m. (CT) on Mediacom Court. The regular season opens with the Hawkeye Challenge from Nov. 13-15. Iowa takes on North Dakota on Nov. 13 at 6 p.m.