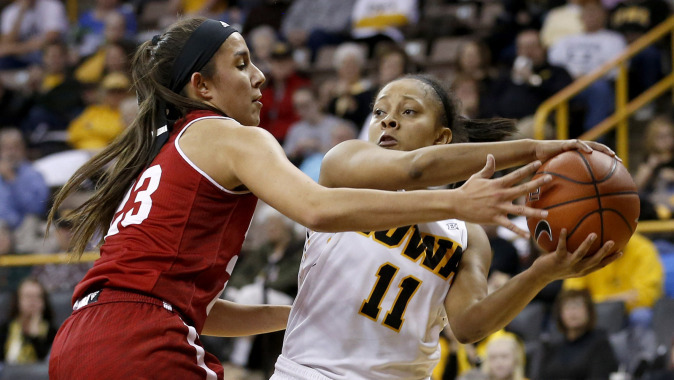 THE SETTING
The No. 24-ranked University of Iowa women’s basketball team hosts its final in-state opponent Drake on Tuesday, Dec. 22. The Hawkeyes (9-2) and Drake (7-3) kick off the Iowa basketball doubleheader at 5 p.m. (CT) inside Carver-Hawkeye Arena.

PROMOTIONS
? Tuesday’s game is a Blackout, and all fans in attendance are encouraged to wear their black Hawkeye gear. The first 1,000 fans at the Hawkeye Rewards event will get a free black t-shirt.
? Tuesday is an Iowa basketball doubleheader, with the men’s basketball team tipping off against Tennessee Tech at 7:30 p.m.

GAME COVERAGE
? Tuesday’s contest will be shown live online through BTN Plus available at btn2go.com.
? Audio of the game is also available on select Hawkeye Radio Network stations and online through Hawkeye All-Access. Brent Balbinot and Stacy Schlapkohl will call the action.
? Balbinot is in his 12th year as Iowa’s play-by-play voice.
? Schlapkohl, who played in 104 games with 49 starts from 2004-08, helped Iowa to three NCAA Tournaments. She scored in double figures in 22 games.
? Links to video, audio, and Gametracker (live stats) are available on the women’s basketball schedule page at hawkeyesports.com.

A LOOK AT THE BULLDOGS
? Drake, picked to finish runner-up in the Missouri Valley Conference, bring a 7-3 record in to the matchup.
? The Bulldogs got off to a 6-0 start before dropping three of their last four contests. The first loss came in overtime at South Dakota, 92-87, and another loss followed at home against Green Bay, 86-61. After rebounding with a win against William Penn, 100-61, Drake fell on the road in its most recent contest at Northern Illinois, 87-73.
? As a team, Drake averages 80.5 points per game. Four average in double figures, including Lizzy Wendell (19.5), Maddy Dean (13.6), Sara Rhine (11.3), Caitlin Ingle (10.0).
? A Hawkeye basketball alum, fourth-year head coach Jennie (Lillis) Baranczyk, is at the helm of the Drake program.
? The Bulldog roster is comprised of three freshmen, three sophomores, three juniors, and one senior.

SERIES HISTORY
? Drake leads Iowa in the all-time series, 24-23.
? Iowa has won 13 consecutive games in the series.
? In the Lisa Bluder era, which began in 2001-02, the Hawkeyes have a 13-1 record in games played against the Bulldogs.

BENCH CONNECTIONS
? UI head coach Lisa Bluder spent 10 seasons as Drake’s head coach before bringing her talents to Iowa. She compiled a record of 187-106, good for a .659 winning percentage.
? Associate head coach Jan Jensen played collegiately at Drake, graduating in 1991 with a public relations degree. As a senior, she led the nation in scoring with 29.6 points per game and was Gateway Conference Most Valuable Player. Jensen was also Bluder’s first assistant and recruiting coordinator at Drake.
? Assistant coach Jenni Fitzgerald also played collegiately at Drake, graduating in 1990 with a business administration/management degree. She was the starting point guard for the Bulldogs, and was named team captain and All-Gateway first team as a senior. Fitzgerald also coached at Drake with Bluder, working with the guards, directing summer camps and handling administrative duties for the program.
? Drake head coach Jennie (Lillis) Baranczyk was a standout player for Bluder at Iowa from 2000-04. She was a three-time captain, three-time All-Big Ten selection, and an All-American. She is one of two Hawkeyes to score 1,700 points and pull down 800 rebounds in her career.
? Junior Ally Disterhoft’s mother, Missy, was a basketball teammate of Jensen and Fitzgerald at Drake. She also played softball for the Bulldogs.
? Senior Claire Till’s mother, Shelley, played college basketball at Drake with Jensen and Fitzgerald.

UP NEXT
Iowa begins Big Ten Conference play on the road at Nebraska on Dec. 31. Tipoff is set for 1 p.m. (CT). The game will be shown on BTN Plus available at btn2go.com.