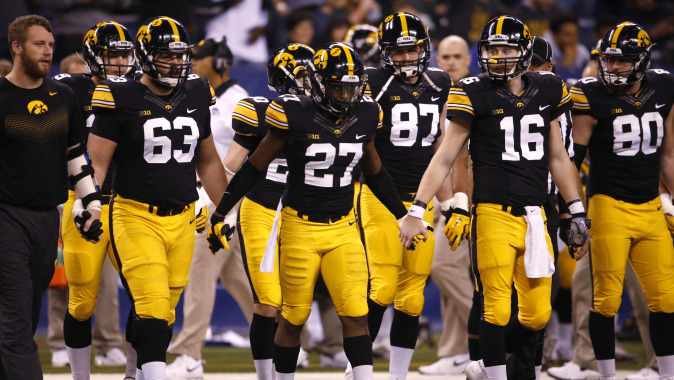 MOBILE, Ala. — University of Iowa senior tight end Henry Krieger Coble and senior center Austin Blythe have been selected to participate on the North team in the 2016 Reese’s Senior Bowl.

The 2016 Senior Bowl will take place Saturday, Jan. 30, in Mobile, Alabama. The all-star game will be televised on the NFL Network, with kick set for 1:30 p.m. (CT). Practices during the week (Tuesday-Thursday) will be televised on ESPNU. Further information is available at seniorbowl.com.

Blythe (6-foot-3, 290-pounds), a native of Williamsburg, Iowa, started all 14 games in 2015. Blythe started the final 45 games and had 49 career starts in 50 games played. Blythe was one of three finalists for the 2015 Rimington Trophy, which is presented annually to the Most Outstanding Center in NCAA Division I college football. He was also named third-team All-America by The Associated Press. He was a team captain for all 14 games.

Blythe played a key role for the Hawkeye offense in 2015. Iowa averaged 30.9 points per game, 181.7 rushing yards, and 204.4 passing yards per game. Iowa scored over 30 points in five straight Big Ten games for the first time ever, and the Hawkeyes ranked among the national leaders in time of possession.

Krieger Coble (6-4, 250) is a native of Mount Pleasant, Iowa. He enjoyed the best season of his career as a senior with 35 receptions for 405 yards and a touchdown. He ranked second on the team in receptions and third in yardage.

Krieger Coble started 12 of 14 games this past season, including the final nine games of the year. His career totals include 42 receptions for 465 yards and four touchdowns.

In addition, senior defensive back Jordan Lomax will participate in the East-West Shrine game.