Hawkeyes to Compete in Back-to-Back Meets 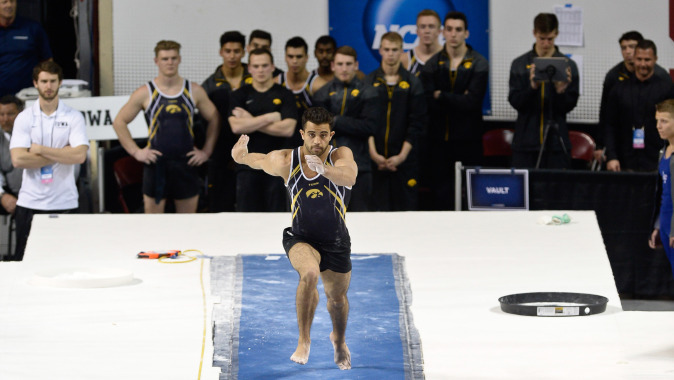 THIS WEEK:
The No. 10-ranked University of Iowa men’s gymnastics team participates in back-to-back meets this weekend. The Hawkeyes host No. 3-ranked Illinois on Saturday Jan. 23 inside Carver-Hawkeye Arena at 1 p.m. (CT). The following day Iowa will travel to Chicago for a dual meet with UIC inside the UIC Pavilion. The competition begins at 2 p.m. (CT).

PROMOTIONS:
• Saturday is Black and Gold night. Fans are encouraged to wear black and gold to the meet.
• Fans will be able to pick up free men’s gymnastics schedule cards, posters, and key tags.
• Kids Zone will be available for young Hawkeye fans prior to the meet.
• Season ticket holders can pick up their free Iowa men’s gymnastics T-Shirt located at the East Entrance.
• All Season Ticket Holders and UI students receive a free slice of pizza.

FOLLOW ALONG:
Fans can follow both meets through live stats and a live stream on Hawkeye All-Access. Links to both will be available on the Iowa men’s gymnastics schedule page at hawkeyesports.com.

SCOUTING THE FIELD:
• Illinois competed in its second meet of the season last weekend with a first place finish at the Wind y City Invitational on Jan. 17 with a team score of 425.950.
• Illinois currently holds two of the top three spots on pommel horse according to roadtonationals. Com. Brandon Ngai sits in first place in the country with a 15.425 average while Logan Bradley is in third with a 15.075 average.
• Illinois is coached by Justin Spring, who is in his seventh year as head coach of the program.
• UIC will clash with Iowa for the second straight weekend. The Hawkeyes defeated UIC at the Windy City Invitational on Jan. 17, 419.650-378.450.
• Head coach Charley Nelson is in his 20th season with the program.

HAWKEYE NEWCOMERS:
The Hawkeyes welcomed four freshmen to the team for 2016: Todd Beyer II, Jake Brodarzon, Kevin Johnson, and Rogelio Vazquez. • Beyer, a 2015 Iowa state champion in all-around, also competed at JO nationals in 2015, placing first on high bar, second on floor, and third on vault.
• Brodarzon is a 2014 national champion on vault and was also crowned the 2015 state champion on floor, rings, vault, high bar, all-around in his home state of New Jersey.
• Johnson competed at the 2015 Michigan state championships placing first on pommel horse and second on rings. He also competed at JO Nationals this past year.
• Vazquez, a back-to-back state Florida champion on rings and all-around, is a six-time JO National Championship qualifier (2009-15). He is also a regional champion on rings, parallel bars, and all-around.

BIG TEN SHOWS POWER:
The Big Ten Conference has been dominant so far this season. Of the top ten teams listed on roadtonationals.com, six are from the Big Ten: Illinois, Ohio State, Penn State, Minnesota, Nebraska, and Iowa.

SEASON TICKETS:
Iowa men’s gymnastics season tickets are on sale for $10 until January 29. Season ticket holders gain admission to three home meets against Big Ten Conference opponents and receive an Iowa gymnastics long sleeve t-shirt with their purchase. All youth, 18 and under, and UI Students can attend home competitions for free. To purchase season tickets, visit hawkeyesports.com or contact the UI Athletics Ticket Office at 1-800-IA-HAWKS.