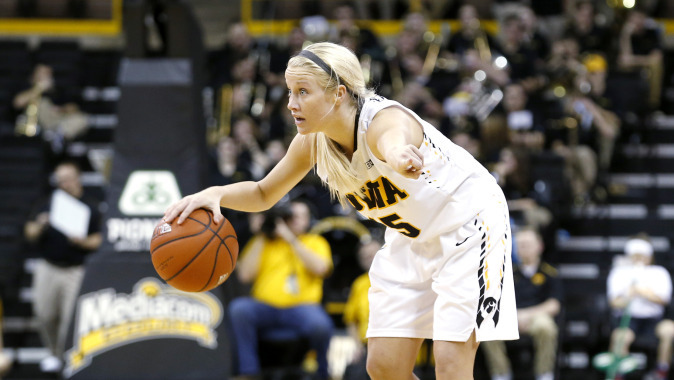 GAME COVERAGE
? Sunday’s game will air live on the Big Ten Network at 2 p.m. (CT). Kevin Lee (play-by-play) and Stephanie White (color) are on the call.
? Live audio of the game can be heard on select Hawkeye Radio Network affiliate stations and on Hawkeye All-Access available at hawkeyesports.com. Brent Balbinot and Todd Werner will call the action.
? Balbinot is in his 12th season as Iowa’s play-by-play voice, while Todd Werner is in his first providing analysis.
? Links to video, audio, and Gametracker (live stats) are available on the women’s basketball schedule page at hawkeyesports.com.

SCOUTING THE BOILERMAKERS
? Purdue enters Sunday’s contest with a 14-4 record overall and a 5-2 mark in Big Ten play (tied for third).
? The Boilermakers opened the conference slate with five consecutive wins (at Michigan, vs. Illinois, at Northwestern, vs. Indiana, vs. Minnesota), before dropping the next two (at Ohio State, vs. Nebraska).
? As a team, Purdue averages 68.5 points and 37.3 rebounds per game. Three average double figures in scoring, including April Wilson (15.7), Ashley Morrissette (11.8), and Bridget Perry (11.7). Perry is also the team’s leading rebounder, averaging 6.1 per contest.
? In conference games alone, Purdue is averaging 71.0 points per game. Five players average double figures in scoring to bolster the offense, including Wilson (17.3), Perry (12.7), Morrissette (11.6), Dominique McBryde (10.6), and Andreona Keys (10.0).
? The roster, comprised of three seniors, two juniors, two sophomores, and four freshmen, is led by 15th year head coach Sharon Versyp.

HEADING BACK HOME
Sophomore point guard Whitney Jennings, who was named Indiana Miss Basketball, Gatorade Indiana Girls Player of the Year, and a Parade All-American as a senior at Logansport High School in 2013-14, looks forward to playing with the Hawkeyes in her home state. Logansport, Indiana, is less than an hour away from West Lafayette, Indiana, which allows many family members and friends to attend Sunday’s game. Jennings has played in every game of her Hawkeye career (53) with 48 starts.

REBOUNDING EDGE
? The Hawkeyes have outrebounded 12 of 19 opponents this season, averaging 40.1 rebounds per game for a +2.4 rebounding margin.
? Iowa is the only team to outrebound Maryland this year, edging the Terrapins, 38-37, in the category.
? Eight of 13 active players have pulled down 51 or more rebounds through 19 games. Junior Ally Disterhoft (108) and senior Kali Peschel (101) lead the team with 5.7 and 5.3 rebounds per game, respectively.
? In 2014-15, Iowa averaged 36.4 rebounds per game and owned a -4.6 rebounding margin. Only six players on the roster posted 50 or more rebounds in the 34-game season.

CALL ON ME
? Junior Ally Disterhoft, a preseason All-Big Ten selection by league coaches, has been a consistent force for the Hawkeyes all season.
? The 6-0 forward paces Iowa in points (16.4) and rebounds (5.7) per game. She is also second in assists, averaging 2.9 per contest.
? She has scored double figures in every game of the season and in 64 of 70 career starts.
? The Iowa City, Iowa, native has led Iowa in scoring in nine of 19 games this season, scoring 20 points or more in four contests.
? Disterhoft owns a .522 field goal percentage, .364 three-point field goal percentage, and .750 free throw percentage.
? She currently ranks 19th on Iowa’s all-time scoring list with 1,288 career points and 21st all-time with 537 career rebounds. Disterhoft is the 34th player in program history to surpass the 1,000 career point threshold.

BREAKOUT PERFORMANCE
? Freshman Tania Davis, Miss Michigan Basketball in 2014-15, made a statement in her return to the Breslin Center in East Lansing, Michigan on Jan. 16, where she won state titles with Goodrich High School in 2012 and 2013.
? Davis led the Hawkeyes with a career-high 16 points and a career-high matching five assists at Michigan State. She matched another career-high with six rebounds in the contest.
? In the first half, Davis was 3-for-3, sinking all three of her three-point field goal attempts.
? The Grand Blanc, Michigan, native closed the game with a .417 field goal percentage (5-12), and an .800 three-point field goal percentage (4-5).
? Davis used her performance against the Spartans as a springboard in to the Penn State game on Jan. 20 in Iowa City, Iowa. She tallied career-highs with a team-leading six assists and four steals, and posted nine points and three rebounds to provide a spark off the bench for Iowa.

COMING ON STRONG
? Sophomore point guard Whitney Jennings has hit her stride, improving significantly in conference play.
? In five of seven league games, Jennings has scored in double figures (10 vs. Rutgers; 10 vs. Maryland; 11 at Wisconsin; 15 at Michigan State; 11 vs. Penn State).
? The Logansport, Indiana, native is leading the team with 23 assists, along with freshman Tania Davis, and owns a .397 field goal percentage and a .348 three-point field goal percentage in conference contests. She averages 10.1 points per game in conference games.
? In all 19 games, she averages 8.7 points per game and is shooting .335 from field goal range and .294 from beyond the arc.

MOVING UP THE CHARTS
? Junior Ally Disterhoft is 19th on Iowa’s all-time scoring list with 1,288 career points and 21st all-time with 537 career rebounds.
? She has played in every game of her Hawkeye career with 70 consecutive starts.
? Disterhoft has scored in double figures in every game this season, and in 64 of her 70 career starts.
? The co-captain leads Iowa in points (16.4) and rebounds per game (5.7).
? Freshman Megan Gustafson has compiled 30 blocks through 19 games played this season, which is fourth on the all-time freshman list at Iowa. The record at Iowa in a freshman season is 79 blocks, set by Morgan Johnson in 2009-10.

UP NEXT
Iowa returns to Carver-Hawkeye Arena on Thursday, Jan. 28 to host Michigan at 7 p.m. (CT). The Wolverines won the first matchup of the season, 82-75, on Jan. 7 in Ann Arbor, Michigan.