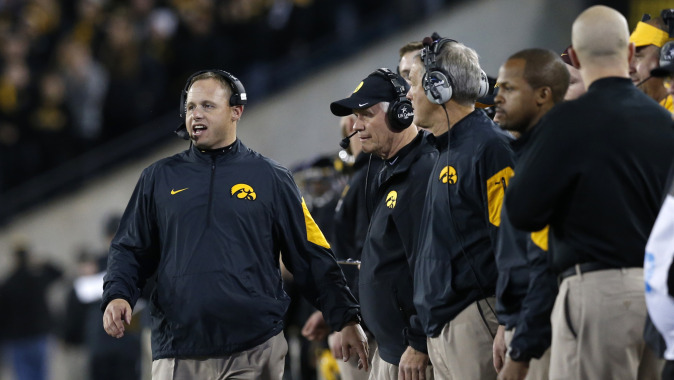 IOWA CITY, Iowa — Seth Wallace, who has served as recruiting coordinator for the University of Iowa football program for the past two years, has been named linebackers coach. The announcement was made Friday by head football coach Kirk Ferentz.

“Seth has done a tremendous job in his role as our recruiting coordinator and defensive assistant,” said Ferentz. “Moving forward, Seth will serve as our linebackers coach and I am confident he will do a tremendous job in that role. We intend to fill our open coaching position sometime after signing day (Feb. 3).”

“I am excited to coach our linebackers as we begin preparations for 2016 and beyond,” said Wallace. “We have a great group returning who have been well coached by Coach Reid. I am very appreciative for this opportunity and look forward to this next phase of my career.”

Wallace served as Iowa’s recruiting coordinator in 2014 and 2015, while also coaching cornerbacks and nickelbacks in 2015 and working with the defensive line in 2014. Wallace returned to the Hawkeye coaching staff after serving as a graduate assistant coach for three seasons (2006-08).

In 2014, Wallace assisted with an Iowa defense that ranked seventh in the nation in pass defense and 22nd in total defense. Iowa led the Big Ten and ranked second in the nation in fewest penalties and penalty yards. Senior tackles Carl Davis and Louis Trinca-Pasat, along with junior end Drew Ott were each named second team All-Big Ten.

In his 15 seasons coaching on the collegiate level, Wallace has served as both offensive and defensive coordinator, coached defensive backs, defensive line and wide receivers, along with holding special teams duties in 12 of the 15 seasons.

Wallace earned his bachelor’s degree in physical education from Coe College in 2001 and his master’s degree in sports management from Iowa in 2008. He and his wife, Erica, have a son, Landry, and a daughter, Maci.