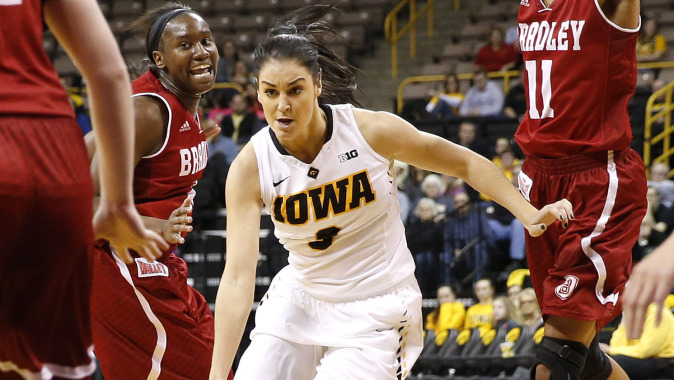 THE SETTING
The University of Iowa women’s basketball team will face Michigan inside Carver-Hawkeye Arena on Thursday, Jan. 28 at 7 p.m. It is the second matchup between the programs this season, as the Wolverines topped the Hawkeyes, 82-75, on Jan. 7 in Ann Arbor, Michigan.

PROMOTIONS
? Hawkeye fans are encouraged to wear white for the Whiteout Game.
? Arrive early to get a free, limited edition Claire Till bobble head.
? It is also Facebook/Twitter Fan Appreciation Night. Fans who bring a coupon code, which can be found on Iowa women’s basketball social media accounts, receive free admission to the game.

GAME COVERAGE
? Fans can watch Thursday’s game live online on BTN Plus, available at btn2go.com.
? Live audio of the game can be heard on select Hawkeye Radio Network affiliate stations and on Hawkeye All-Access available at hawkeyesports.com. Brent Balbinot and Kathryn Reynolds will call the action.
? Balbinot is in his 12th season as Iowa’s play-by-play voice.
? Reynolds, a member of the infamous Core Four and team captain for the Hawkeyes in 2014-15, is pursuing a law degree at the University of Iowa.
? Links to video, audio, and Gametracker (live stats) are available on the women’s basketball schedule page at hawkeyesports.com.

SCOUTING THE WOLVERINES
? Michigan is 11-8 overall and 3-5 in conference play heading into Thursday night.
? The Wolverines have posted Big Ten wins against Iowa, 82-75, at Minnesota, 93-86, and at Penn State, 91-87.
? As a team, Michigan averages 81.5 points per game. Katelynn Flaherty (21.7) and Hallie Thome (13.4) average double figures in scoring.
? Michigan is outscoring (+12.7) and outrebounding (+6.4) its opponents so far this season.
? The Wolverines, comprised of four freshmen, four sophomores, two juniors, and here seniors, are led by fourth-year head coach Kim Barnes Arico.

SEASON REWIND
? The Wolverines scored 30 points in the fourth quarter to earn a comeback win over the Hawkeyes, 82-75, on Jan. 7 in Ann Arbor, Michigan.
? Sophomore Chase Coley had her highest scoring effort in conference play, leading the team with 18 points, followed by junior Ally Disterhoft and freshman Megan Gustafson, who each compiled 14 points.
? The inside game was very successful for the Hawkeyes, as Gustafson made 5-of-6 field goals and 4-of-4 free throws and Coley sunk 7-of-10 field goals and 4-of-4 free throws. Both also added two blocks and three rebounds apiece.
? Iowa’s bench contributed 24 points in the game.

QUICK HITS
? Iowa, a team that has played the 28th most difficult schedule in the country so far this season, is No. 48 in the latest RPI release. Michigan is No. 78 in the RPI rankings.
? Iowa is the only team this season to outrebound Maryland, edging the Terrapins 38-37 in the category.
? The Hawkeyes have outrebounded 12 of 20 opponents this season, averaging 39.1 rebounds per game for a +1.6 margin.
? Iowa averages 73.0 points per game and owns a +3.6 scoring margin. Ally Disterhoft (16.6), Alexa Kastanek (10.8), and Chase Coley (10.2) average double figures in scoring.
? Thursday’s game against Michigan is the ninth game of the conference slate, signaling the halfway point of Big Ten regular season play.
? Iowa debuted a new starting lineup at Purdue in guard Tania Davis, guard Whitney Jennings, forward Ally Disterhoft, forward Chase Coley, and center Megan Gustafson. It marked the first career start for Gustafson and the third for Davis.

BUTTENHAM BREAKS OUT
? Sophomore Christina Buttenham came off the bench at Purdue for her best collegiate performance yet.
? The forward had a near perfect outing, sinking 5-of-6 field goals including a perfect 3-for-3 mark from three-point land, to set new career high with 14 points.
? She also posted three rebounds, one steal, and one assist in her career high 27 minutes.
? At 6-0, Buttenham leads the Hawkeyes in offensive rebounds in conference play (16) and is third in total rebounds (32).

CALL ON ME
? Junior Ally Disterhoft, a preseason All-Big Ten selection by league coaches, has been a consistent force for the Hawkeyes all season.
? The 6-0 forward paces Iowa in points (16.6) and rebounds (5.6) per game. She is also second in assists, averaging 2.9 per contest.
? She has scored double figures in every game of the season and in 65 of 71 career starts.
? The Iowa City, Iowa, native has led Iowa in scoring in 10 of 20 games this season, scoring 20 points or more in five contests.
? Disterhoft owns a .523 field goal percentage, .357 three-point field goal percentage, and .750 free throw percentage.
? She currently ranks 19th on Iowa’s all-time scoring list with 1,309 career points and 21st all-time with 541 career rebounds. Disterhoft is the 34th player in program history to surpass the 1,000 career point threshold.

BREAKOUT PERFORMANCE
? Freshman Tania Davis, Miss Michigan Basketball in 2014-15, made a statement in her return to the Breslin Center in East Lansing, Michigan, on Jan. 16, where she won state titles with Goodrich High School in 2012 and 2013.
? Davis led the Hawkeyes with a career-high 16 points and a career-high matching five assists at Michigan State. She matched another career-high with six rebounds in the contest.
? In the first half, Davis was 3-for-3, sinking all three of her three-point field goal attempts.
? The Grand Blanc, Michigan, native closed the game with a .417 field goal percentage (5-12), and an .800 three-point field goal percentage (4-5).
? Davis used her performance against the Spartans as a springboard in to the Penn State game on Jan. 20 in Iowa City, Iowa. She tallied career-highs with a team-leading six assists and four steals, and posted nine points and three rebounds to provide a spark off the bench for Iowa.
? On Jan. 24 at Purdue, Davis earned her way back in the starting lineup. She posted 14 points and dished out a career-high seven assists in her third career start.

REBOUNDING EDGE
? The Hawkeyes have outrebounded 12 of 20 opponents this season, averaging 39.1 rebounds per game for a +1.6 rebounding margin.
? Iowa is the only team to outrebound Maryland this year, edging the Terrapins, 38-37, in the category.
? Eight of 13 active players have pulled down 51 or more rebounds through 20 games. Junior Ally Disterhoft (112) and senior Kali Peschel (101) lead the team with 5.6 and 5.3 rebounds per game, respectively.
? In 2014-15, Iowa averaged 36.4 rebounds per game and owned a -4.6 rebounding margin. Only six players on the roster posted 50 or more rebounds in the 34-game season.

COMING ON STRONG
? Sophomore point guard Whitney Jennings has hit her stride, improving significantly in conference play.
? In five of eight league games, Jennings has scored in double figures (10 vs. Rutgers; 10 vs. Maryland; 11 at Wisconsin; 15 at Michigan State; 11 vs. Penn State).
? The Logansport, Indiana, native is second on the team with 24 assists, and owns a .400 field goal percentage and a .346 three-point field goal percentage in conference contests. She averages 9.8 points per game in conference games.
? In all 20 games, she averages 8.7 points per game, and is shooting .339 from field goal range and .296 from beyond the arc.

MOVING UP THE CHARTS
? Junior Ally Disterhoft is 19th on Iowa’s all-time scoring list with 1,309 career points and 21st all-time with 541 career rebounds.
? She has played in every game of her Hawkeye career with 71 consecutive starts.
? Disterhoft has scored in double figures in every game this season, and in 65 of her 71 career starts.
? The co-captain leads Iowa in points (16.6) and rebounds per game (5.6).
? Freshman Megan Gustafson has compiled 31 blocks through 20 games played this season, which is fourth on the all-time freshman list at Iowa. The record at Iowa in a freshman season is 79 blocks, set by Morgan Johnson in 2009-10.

UP NEXT
The Hawkeyes face Northwestern on Sunday, Jan. 31, in Evanston, Illinois. Tipoff is set for 2 p.m. (CT) and the game will be shown live on BTN Plus.