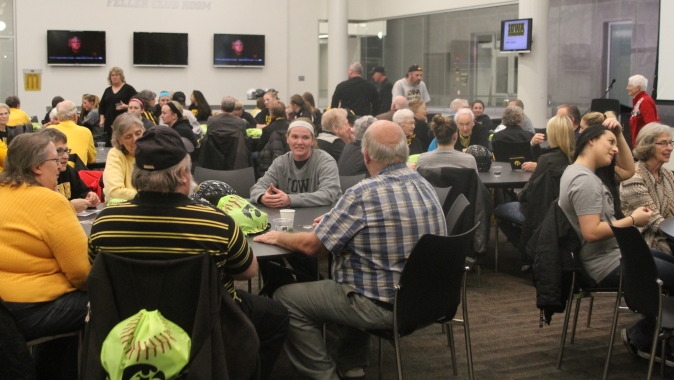 IOWA CITY, Iowa — In an effort to give back to their most loyal fans, the University of Iowa softball team hosted a “Season Ticket Holder Dinner” at Carver-Hawkeye Arena on Jan. 26.

“It was time for us to give back to our season ticket holders,” said Looper. “We have a large number of people that have held tickets for over 20 or 30 years. We have to honor and thank those people, because they are the ones who fill the stands. We wanted to give them a chance to get to know our team in a more intimate setting.”

More than 60 softball season ticket holders attended the banquet. Each supporter received a goody bag at the door and then took a seat alongside the student-athletes and coaching staff. After dinner, Looper introduced her team to the crowd.

“I enjoyed meeting the kids,” said Phyllis Urban, a season ticket holder since Jane Hagedorn was at the helm (1974-80). “I’m a retired teacher, so I loved hearing their majors. They are all pursuing careers that are going to help the community. It’s neat to hear how these kids are going to use their education to go out and help other people.”

Three Hawkeyes — senior Erin Erickson, junior Kara Misel, and sophomore Sarah Kurtz — spoke about their experiences as student-athletes before the trivia began. The Hawkeyes teamed up with their most loyal supporters to answer 15 questions about the program’s history. The table with the most points won autographed helmets and softballs.

“I enjoyed the trivia, because we all got to get together and talk,” said Karin Jagnow, a season ticket holder for 30-plus years. “The questions were hard. You knew what the answers were to some, but you just couldn’t quite pull them out of your head.”

“It was fun watching them during our trivia,” said Looper. “Some of our kids didn’t even know a third of the questions, but our season ticket holders were raddling off names and dates. Knowing people have so much passion for our sport was good for our girls.”

For freshman Erin Riding, the night served as her first opportunity to meet Hawkeye fans. The McKinney, Texas, native was impressed by the passion of her new fan base.

“It was interesting to see how many people have supported the Iowa softball program for so long,” said Riding. “It’s great coming into a community that supports you and it means a lot to me as a student-athlete.”

The Hawkeyes kickoff the 2016 season at the Texas A&M Corpus Christi Tournament from Feb. 12-14. Iowa’s home opener is set for March 30 against Drake.

“Now our girls will know the faces that greet them every game,” said Looper. “We talk about how our team is a family, our season ticket holders are just an extended part of that.”