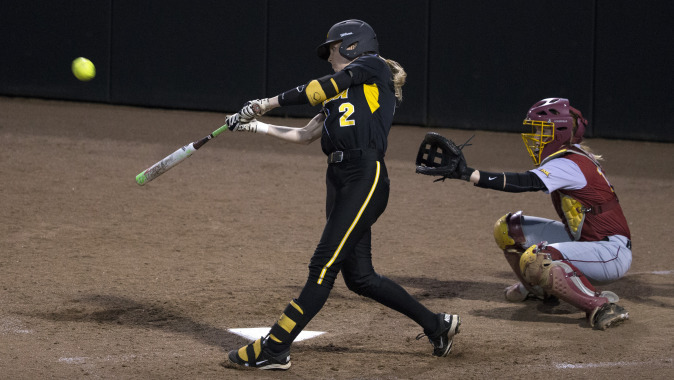 THIS WEEK
The University of Iowa softball team opens the 2016 season at the Texas A&M Corpus Christi Tournament this weekend. The Hawkeyes open the weekend with a 12:30 p.m. (CT) contest against Louisville on Friday before taking on tournament host Texas A&M Corpus Christi at 3 p.m. Iowa will face Louisville (10 a.m.) and Sam Houston State (3 p.m.) on Saturday, and conclude the weekend with an 11:30 a.m. contest against the Islanders on Sunday.

WATCH ONLINE
Both of Iowa’s contests against Texas A&M Corpus Christi will be streamed online. Links are available on the Iowa softball schedule page on hawkeyesports.com. The Hawkeyes and Islanders are set to meet Friday at 3 p.m. (CT) and Sunday at 11:30 a.m.

IN THE RANKINGS – B1G
Five Big Ten teams appear in the ESPN.com/USA Softball Collegiate Preseason poll released on Jan. 26. No. 2 Michigan and No. 13 Minnesota are ranked within the top 25, while Northwestern, Nebraska, and Ohio State are all receiving votes.

TAKING ON THE BEST
•Six of Iowa’s 2016 opponents are coming off a 2015 NCAA Tournament appearance.
•Iowa is scheduled to play 14 games against those opponents this season.
•The team’s include: Louisville, Texas, Nebraska, Northwestern, Missouri, and Minnesota.

NEWCOMERS
•Five student-athletes will make their Hawkeye debuts this spring.
•Junior transfer Elizabeth Wiegand joins the team after spending two seasons with UT Martin. Wiegand appeared in 26 games with 21 starts for the Skyhawks in 2015. She led UT Martin in ERA (2.94), wins (12), appearances (26), starts (21), complete games (16), shutouts (3), innings pitched (135.2), and strikeouts (63) as a sophomore.
•Sophomore transfer Katy Taylor joins the Hawkeyes after spending a season at Labette Community College. Taylor helped the Cardinals to a 38-16 overall record and a Region VI Championship. She led the nation in stolen bases (89) and paced the Cardinals in hits (76), doubles (10), triples (3), walks (21), batting average (.435), and on base percentage (.485).
•Freshmen Erin Riding (pitcher), Mallory Kilian (pitcher/utility), and Brooke Rozier (catcher/utility) will all make their Hawkeye debut in 2016.

HAWKEYES IN 2015
The Hawkeyes posted a 19-40 overall record in 2015. Iowa finished ninth in the Big Ten with an 8-15 mark. Thirteen of Iowa’s losses came against ranked opponents.

SCHEDULE AT A GLANCE
The Hawkeyes compete in five nonconference tournaments before opening Big Ten play. Iowa opens conference action on March 25 at Indiana. The Hawkeyes are scheduled to play 27 games away from home before kicking off action at Pearl Field against Drake on March 30.

BATTING .750
The Hawkeyes won three of their last four contests in 2015. On May 3, 2015, Iowa concluded its regular season with an 8-6 victory over Northwestern at Pearl Field. Four days later, in the Big Ten Conference Tournament opener, the Hawkeyes knocked off Rutgers, 5-3. That was followed by a 2-0 shutout win over No. 12 Minnesota in the quarterfinals. On May 9, Iowa scored the final three runs during a 9-6 loss to Nebraska in the tournament semifinal.

SCOUTING LOUISVILLE
•Louisville posted a 30-19 overall record in 2015, and finished fourth in the ACC with a 16-7 mark.
•The Cardinals earned their 12th consecutive NCAA regional appearance in 2015.
•Louisville returns five starters and 12 letterwinners.
•The Hawkeyes own a 5-3 advantage in the all-time series. The Hawkeyes and Cardinals last met for a pair of games in 2013. The Hawkeyes won the first game, 6-2, while the Cardinals edged out a 6-4 victory in game two.

LOUISVILLE CONNECTIONS
Former Hawkeye student-athlete and assistant coach Stacy May-Johnson is in her second year as an assistant coach for the Cardinals. The 2011 USA Softball Female Athlete of the Year, served as an assistant coach for the Hawkeyes from 2011-14. May-Johnson was a four-year letterwinner at Iowa from 2003-06. The three-time NFCA All-Mideast Region and All-Big Ten selection was named Big Ten Freshman of the Year in 2003 while leading Iowa to the regular season and conference tournament championship.

SCOUTING SAM HOUSTON STATE
•Sam Houston State recorded a 19-28 overall record in 2015.
•The Bearkats finished ninth in the Southland Conference with a 10-15 mark.
•Sam Houston State returns 10 letterwinners, four starters, and two pitchers from last season.
•The Bearkats own a 3-0 advantage in the all-time series.
•Saturday’s contest marks the first meeting between the Hawkeyes and Bearkats since 1993.

DEPTH IN THE CIRCLE
The Hawkeyes added much needed depth to their bullpen this offseason. Redshirt junior Shayla Starkenburg (17-23) started 38 games for the Hawkeyes last season, while sophomore Ashley Yoways (2-16) notched 20 starts. They will be joined by senior Jillian Navarrete, junior Elizabeth Wiegand, and freshmen Erin Riding and Mallory Kilian.

2015 B1G TOURNAMENT RUN
After earning the No. 10 seed with an 8-15 record in regular season conference play, the Hawkeyes overcame a three-run deficit against seventh-seeded Rutgers in the opening round of the Big Ten Tournament on May 7. Sophomore Kaitlyn Mullarkey hit a two-run blast to tie the contest 3-3 in the sixth, and redshirt sophomore Sammi Gyerman knocked a two-run shot out of the park in the seventh to give the Hawkeyes the lead. It proved to be the game-winner as the Iowa defense shut down the Scarlet Knights from the third inning on to secure the 5-3 win.

The opening round victory gave the Hawkeyes a rematch with the nationally ranked Golden Gophers on May 8. Redshirt junior Holly Hoffman plated two runs with a double in the top of the third to give Iowa the lead. Redshirt sophomore Shayla Starkenburg registered a gem in the circle, holding the Gophers scoreless for just the third time this season. She allowed two hits and struck out four to secure the 2-0 win.

Iowa went on to face third-seeded Nebraska in the tournament semifinals on May 9. The Hawkeyes rallied to come within three runs, but could not complete the comeback as the Huskers notched the 9-6 victory. Iowa’s Big Ten Tournament semifinal berth marked its deepest tournament run since 2008.

HIGHLIGHTING SPORTSMANSHIP
Junior Haley Hansel received the team’s Big Ten Sportsmanship Award in 2015. Student-athletes chosen to receive the honor are individuals who have distinguished themselves through sportsmanship and ethical behavior. These student-athletes must also be in good academic standing and have demonstrated good citizenship outside of the sports-competition setting.

PRACTICE FACILITIES
The Hawkeyes benefited from two new facilities in 2015 — the indoor Iowa Turf Facility, located at the Hawkeye Tennis and Recreation Complex, and the Jacobson Hitting Facility, located in football’s former weight room. The HTRC Iowa Turf Facility has enabled the program to have consistency in team practices, while the Jacobson hitting cages have allowed student-athletes to take extra reps at any time.