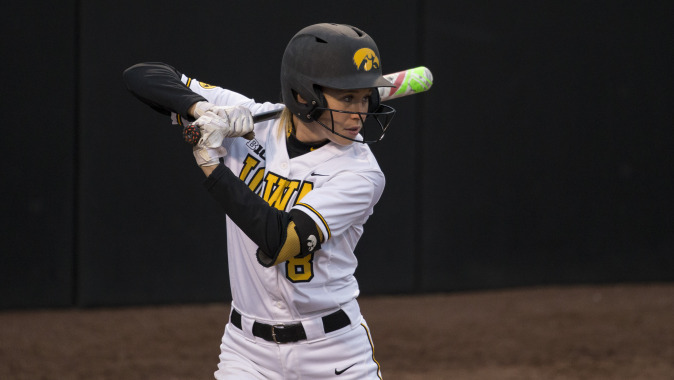 CORPUS CHRISTI, Texas — The University of Iowa softball team split games against Louisville (1-1) and Texas A&M-Corpus Christi (1-0) on Friday afternoon at Chapman Field. The Hawkeyes (1-1) defeated the Cardinals, 1-0, in game one before falling to the Islanders, 2-1, in game two.

After putting runners on in each of the first two innings, the Hawkeyes plated their first run of the 2016 season in the top of the third. Sammi Gyerman reached on an error by the Louisville shortstop. The redshirt junior stole second to move herself into scoring position, before senior Whitney Repole sent a double to left center to give the Hawkeyes a 1-0 lead.

Louisville threatened in the sixth. The Cardinal leadoff hitter started the inning with a single up the middle, advanced to second on a sacrifice bunt, and moved to third on a grounder to first. Solid defense followed as junior Kaitlyn Mullarkey fielded a sharply hit ground ball to first base to end the inning and the Louisville scoring chance.

The Cardinals put the leadoff batter on in the bottom of the seventh, but a pop out and back-to-back strikeouts by junior Elizabeth Wiegand secured the win for the Hawkeyes.

“Offensively, we didn’t put a lot up, but we put the one up that mattered,” said UI head coach Marla Looper. “Early on we were plugging away pretty good and then we didn’t make the adjustments to the new pitcher. We learned a lot of very good things about our team.”

Wiegand (1-0) notched the complete-game shutout in the circle. The Moscow Mills, Missouri, native allowed just three hits, walked one, and struck out five in her Hawkeye debut.

“I was pleased with how Liz attacked the hitters,” said Looper. “She had a vibe about her on the mound. It shows her veteran status.

“Louisville is a very seasoned and well-coached team. They are one of the better ball clubs, and they will do well in their conference. They are going to come with a different game plan tomorrow and we have to be ready to attack that.”

The Hawkeyes got on the board early in game two, plating a run in the top of the first. Junior Claire Fritsch reached after a catcher’s interference and stole second. Senior Holly Hoffman followed with a single to left to put the Hawkeyes ahead, 1-0.

Texas A&M-Corpus Christi struck back in the bottom of the fifth. The Islander leadoff batter reached on an infield single. After a pair of flyouts, freshman Erin Riding entered the circle to relieve starter Mallory Kilian with a runner on second. Back-to-back walks loaded the bases for the Islanders and an RBI single through the left side plated two runs to give TAMUCC a 2-1 lead.

The Hawkeyes loaded the bases in the top of the sixth, but could not come up with a timely hit.

“We struggled finding the zone in the second game,” said Looper. “If you can’t find the strikezone, it puts a lot of pressure on the offense and defense. We had scoring opportunities, but we couldn’t score. We have to get better in those moments.”

Riding suffered the loss in the circle. The freshman allowed one run on two hits and two walks in one and a third innings. Kilian recorded the first start of her Hawkeye career. The Fort Dodge, Iowa, native gave up one run on three hits and three walks in four and two-thirds innings.

Iowa returns to action tomorrow with a rematch against Louisville at 10 a.m. (CT) and a 3 p.m. contest against Sam Houston State.